In response to the demolition of two high-profile settlement buildings, an MK in the ruling coalition calls for the destruction of the High Court itself. He may not have thought that one through. 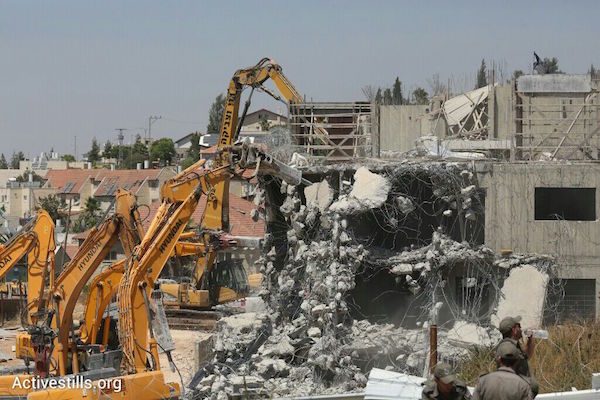 Israeli authorities demolish two apartment buildings in the settlement of Beit El, near Ramallah, July 29, 2015. (Oren Ziv/Activestills.org) The High Court rejected the State’s appeals to save the two buildings that were illegally built on privately owned Palestinian land.

Israel’s High Court of Justice on Monday ordered the state to demolish two apartment buildings in the settlement of Beit El. Israeli police and military forces carried out the order within hours, leading to physical clashes with settlers and exceptionally harsh attacks on the court by right-wing members of the government. Human rights groups hailed the ruling as a victory.

But today of all days, it is important to remember that the High Court itself is one of the most important cornerstones propping up the occupation. The Israeli High Court of Justice has never written a single ruling (not even one!) that has come close to putting a wrench in the gears of the occupation. Quite the opposite. The court’s justices have given their stamp of approval to each and every instrument the State of Israel uses to impose its apartheid regime on the Palestinian population. 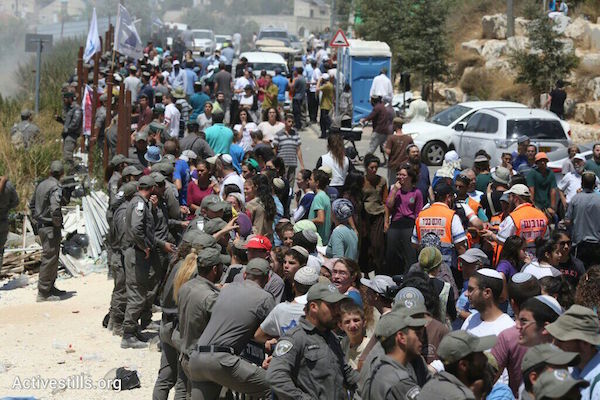 Settlers protest as Israeli authorities carry out a High Court order to demolish two apartment buildings in the settlement of Beit El, near Ramallah, July 29, 2015. (Oren Ziv/Activestills.org) All Israeli settlements in the West Bank are illegal under international law.

The High Court’s primary role is building a legal framework in which all of those things can be carried out: how and where to establish settlements. How to expropriate land. How to deport Palestinians. How to assassinate them. How to annex land. How and when to torture. Somebody needs to do it. That is why High Court is important. So in cases like the two apartment buildings in Beit El, the court stages a high drama. It sets the boundaries with exceptional cases like this. And that, too, is important.

The High Court has made some important rulings and set a number of positive precedents for the citizens of Israel. But the Palestinians living in the territories are not citizens, and they have almost exclusively been harmed by the court and its rulings.

In response to the High Court order to demolish the two settlement buildings Wednesday morning, ruling coalition MK Moti Yogev of the Jewish Home party said the government should send a military bulldozer to demolish the highest court of the land.

Be my guest, Mr. Yogev. The High Court is the cornerstone of the occupation and each brick removed from its walls brings us one step closer to ending Israel’s military rule over the Palestinians.