Violence and incitement in education should be condemned on, and from every side. But clinging to and focusing only on the worst of the ‘other side’ can be even worse than incitement. 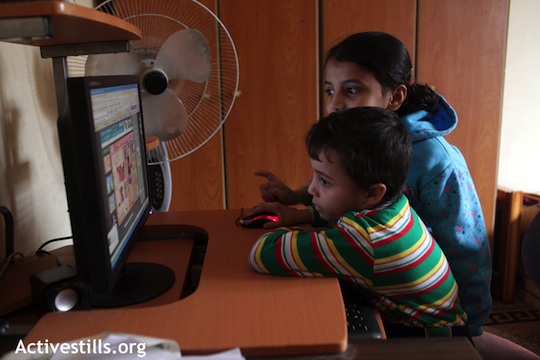 The Hamas leadership in Gaza is replacing Palestinian Authority high school textbooks with its own, New York Times reported Monday. The Hamas textbooks, the story explains, promote militancy and a Hamas-tinted reading of history, Palestinian identity and the conflict.

The report is upsetting. The last thing this conflict needs is even more extreme, hard-line and distorted renditions of its history for any of the parties involved.

It is also disturbing because of the social and political context in which readers will interpret it. This in no way implies that the story shouldn’t be told. But the cheap political manipulation it will certainly feed can help no one.

Most Jews, Israelis and mainstream, even liberal supporters of Israel who read the article will be horrified. Many already believe that Palestinian Authority textbooks are hotbeds of hatred, stuffed full of Der Sturmer images of Jews, suffused with cults of death. In their mind’s eye, classrooms full of Palestinian kids intone, “death to Jews, throw Zionists into the sea,” every day.

Conservative Israelis and their supporters will be gleeful. The notion that Palestinian education is a factory for anti-Israel incitement has become a touchstone for their reluctance to advance peace, and fallback excuse when argued out of any other point. Incitement is dragged out to reinforce the permanence of Palestinian hostility. The fixation has become so deep in recent years that incitement now rivals the “no partner” mantra as a justification for continued, maybe permanent, occupation.

Israelis have become so wedded to the image of brainwashed Palestinian children that evidence to the contrary is actually threatening. When a comprehensive U.S. State Department-funded study meticulously examined the books on both sides and concluded that the level of incitement in Palestinian textbooks was not as awful as previously thought, the Israeli government went into defensive overdrive and rejected the study altogether – even though the authors concluded that the Israeli education system is more balanced than the Palestinian side.

In sum, today’s story will add to the cheap and dangerous manipulation of this unpalatable reality. But clinging to the worst aspects of the opposite side can be just as bad as incitement itself. I believe that we must consider the following points alongside the New York Times story:

First, if a systematic study shows that overall incitement in Palestinian education was not as bad as the exaggerated enemy image would imply, that is a good thing. To think otherwise indicates that Israel depends for its own identity on the most negative stereotype of the enemy, which is not healthy for any society.

Second, distortions of history and militarist values are promulgated on both sides, indeed, on all sides. It’s easy to turn the crosshairs of accusation onto the other, and much harder to see through what is almost transparent to us, about ourselves. Noam Sheizaf thoughtfully recalled not the outrageous but the banal militarization that infuses Israeli children’s education in Israel from the most tender of ages.

Third, history education in schools everywhere is nationalized and war-centered. We were brought up in America singing the Battle Hymn of the Republic, for god’s sake, with ROTC recruitment in high school.

Fourth, personally, I find the following to be the most dangerous and insulting aspects of the Hamas textbooks, from the New York Times report:

What Gaza teenagers are reading in their 50-page hardcover texts this fall includes references to the Jewish Torah and Talmud as “fabricated,” and a description of Zionism as a racist movement whose goals include driving Arabs out of all of the area between the Nile in Africa and the Euphrates in Iraq, Syria and Turkey.

“Palestine,” in turn, is defined as a state for Muslims stretching from the Jordan River to the Mediterranean Sea. A list of Palestinian cities includes Haifa, Beersheba and Acre — all within Israel’s 1948 borders. And the books rebut Jewish historical claims to the territory by saying, “The Jews and the Zionist movement are not related to Israel, because the sons of Israel are a nation which had been annihilated.”

There is no underestimating the dismissive and destructive nature of denying the religious, spiritual and historic teachings of another culture. But until Israelis and Jews are prepared to ask self-critically how many times we have repeated, like automatons, that “there is no such thing as a Palestinian nation/people” or that “Islam is a primitive, non-intellectual religion of violence and death,” we will subject ourselves to mirror-image brainwashing. Just today, MK Orit Strock called Arabs “savages” in the Knesset.

Targeting the Palestinians for militarism and distorted views of history is perfectly fine. I am against militarism everywhere. But targeting only the Palestinians is nothing but flimsy hypocrisy. It contributes to the perpetuation of conflict; it is a form of incitement in itself.