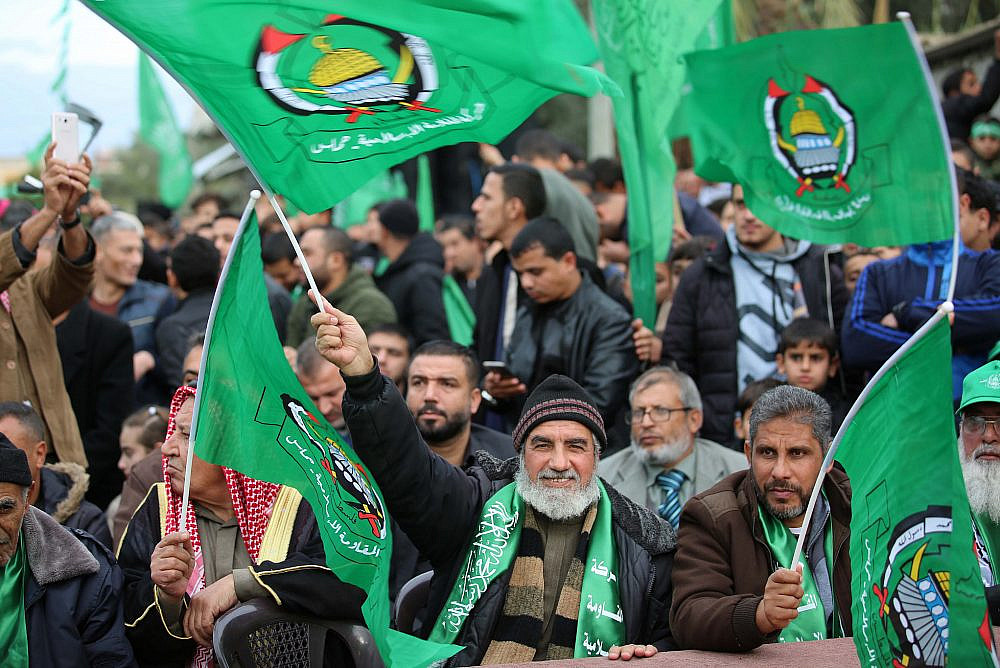 Palestinians attend a Hamas rally marking the 32nd anniversary of its founding in the Nusseirat camp in central Gaza City, Dec. 15, 2019. (Hassan Jedi/Flash90)

Following a brief debate, the British House of Commons passed a motion on Wednesday to proscribe the whole of the Palestinian Islamist movement Hamas as a “terrorist organization” under the country’s 2000 Terrorism Act. Until now, only the group’s military wing, the Izz al-Din al-Qassam Brigades, had been formally listed as such under UK law.

At first glance, this motion, which received cross-party support, may seem uncontroversial to many. But once the dust settles, it greatly risks muddying the path toward peacemaking in Israel-Palestine.

Proponents are right in arguing that a full designation brings the U.K. in line with the longstanding positions of the EU and U.S. on Hamas. But the parliamentary bill also goes much further by creating a series of criminal offenses under U.K. law punishable by imprisonment and fines.

These offenses include formal membership in Hamas; expressing a supportive opinion of the group, such as by wearing clothing in a way or in circumstances as to arouse reasonable “suspicion”; and arranging a private meeting with members of the group. Anyone found guilty of these offenses can face up to 14 years in prison. The law also has extraterritorial jurisdiction, meaning it applies to U.K. nationals and residents overseas.

Wednesday’s move was motivated at least as much by domestic considerations as by the proclaimed fight against terrorism. Priti Patel, the U.K. Home Secretary who has been the driving force behind the legislation, has framed it as an imperative to protect Britain’s Jewish community — even though Hamas has never threatened attacks on U.K. soil, nor is it known to have carried out any attacks outside of Israel-Palestine (with the possible exception of allegedly organizing prison breaks to free detained members in Egypt). 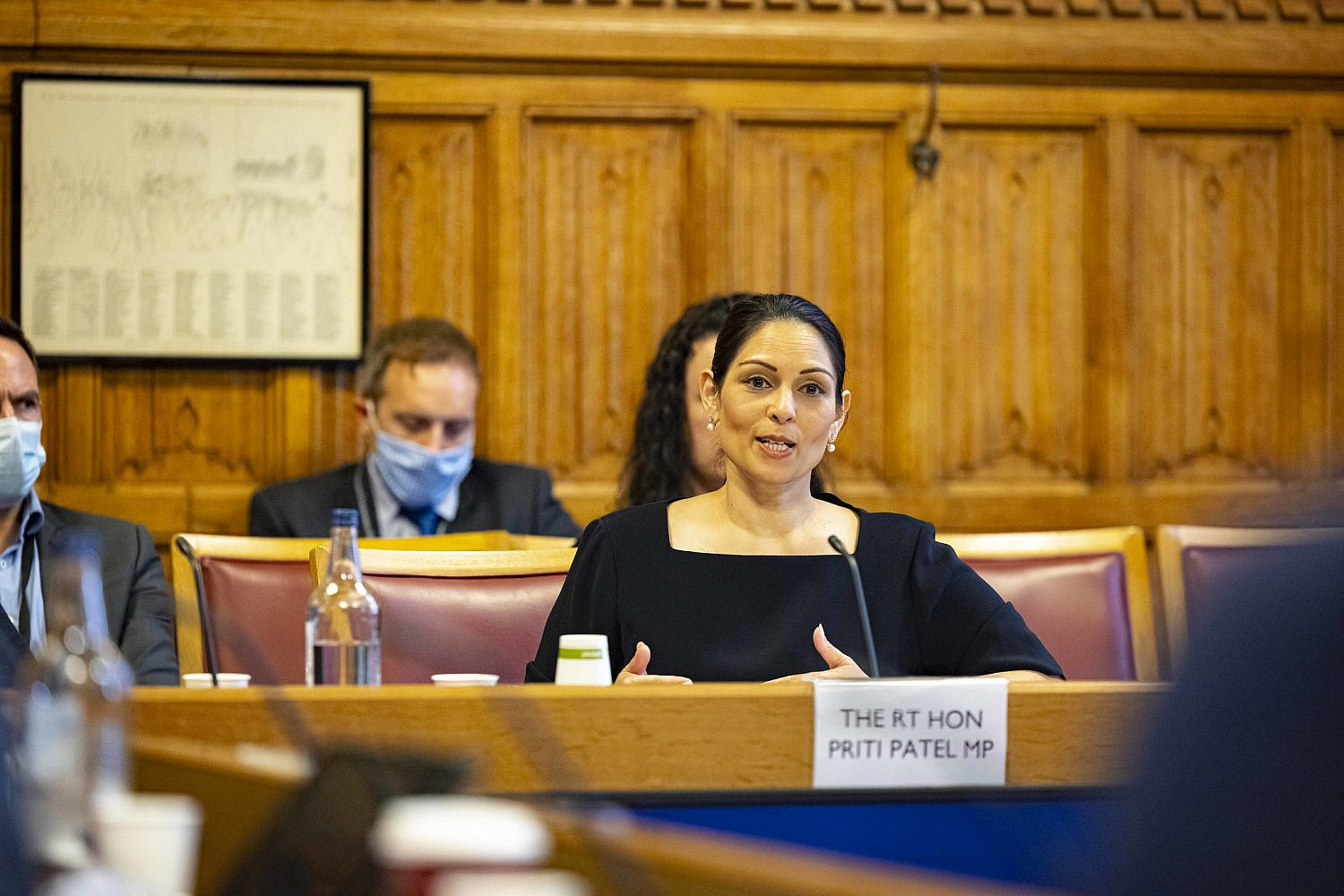 At its heart, the move is good politics for Patel’s Conservative Party, allowing it to demonstrate strong pro-Israel credentials while scoring points against the rival Labour Party, whose previous leader Jeremy Corbyn was seen as having pro-Palestinian sympathies as well as warm relations with Hamas. All of this, in turn, is undoubtedly good for Patel herself, as she seeks to boost her standing within the party for her future leadership ambitions.

While the government has cast Wednesday’s proscription as an important step in degrading Hamas, in reality, it will have little real effect on the movement’s operations. The group, which has no formal presence in the U.K., has been under a plethora of sanctions for more than two decades, including EU financial sanctions which applied to the U.K. while it was a member. Moreover, the U.K. had already made it an offense to provide money or other property for the purposes of terrorism under Schedule 3 of the Terrorism Act, provisions that were further strengthened by the 2001 Anti-Terrorism Crime and Security Act.

It is notable that while the list of 78 proscribed organizations does include the now-defunct Abu Nidal organization (a militant group that splintered from Yasser Arafat’s Fatah party in the 1970s), it is missing several other Palestinian armed groups. Also absent are the Taliban in Afghanistan and Houthis in Yemen, both of which have engaged in extensive violence against civilians (and in the case of the former, killed U.K. service members).

Still, Wednesday’s decision could have other, more immediate domestic consequences: it may sweep up a number of political Islamist figures and networks based in the U.K. who allegedly have ambiguous, or even non-existent, ties with Hamas. In Austria, for example, a purported crackdown on Islamist groups led to police raids against individuals “belonging to and supporting the terrorist Muslim Brotherhood and Hamas organizations,” according to Austrian prosecutors. This is despite the fact that the Brotherhood is not considered to be a terrorist organization by Austria or the EU, and that despite a shared Islamist ideology, the two groups have few if any formal ties .

Above all, though, the U.K.’s move hurts conflict resolution efforts. The question is not whether Hamas are “good guys.” The group has a clear track record of targeting civilians: on Sunday, for example, a Hamas member fired a submachine gun in the Old City in occupied East Jerusalem, killing an Israeli tour guide and wounding others. 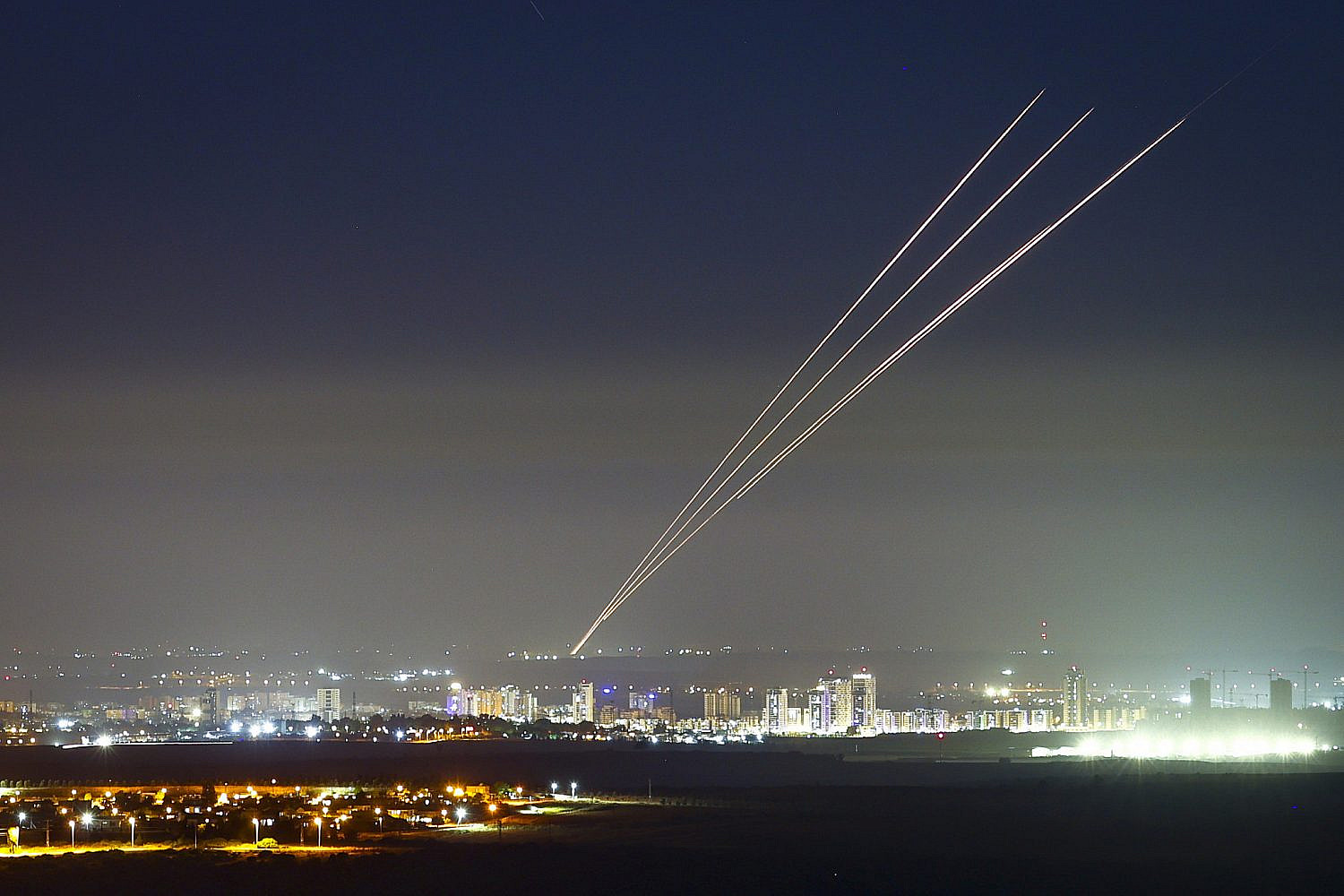 Rockets fired by Hamas militants in Gaza into Israel, seen over the central Israeli town of Kiryat Gat, May 18, 2021. (Nati Shohat/Flash90)

The organization also has a long history of indiscriminately firing rockets against the Israeli population, which constitutes a war crime under international law. In the blockaded Gaza Strip, where Hamas has ruled since 2007, the group has relied on authoritarian methods to preserve its power, carrying out torture, arrests, and other repressive acts to crush dissent among its own Palestinian population.

Instead, the question the U.K. should be asking is how best to deal with the group to prevent future armed violence and advance genuine peacemaking efforts. Decades of international sanctions, targeted assassinations, and a choking blockade by Israel have demonstrably failed to achieve this, nor have they decisively weakened Hamas. The government seemed to admit this during the parliamentary debate, noting that despite years of sanctions, Hamas continues to have “significant terrorist capability, including access to extensive and sophisticated weaponry.”

Despite what the U.K. and Israel may desire, Hamas remains an integral part of the Palestinian political system with a large popular support base. It cannot be wished away. Even as it has come under international and regional pressure, Hamas’ domestic standing has remained strong, bolstered by its latest war with Israel in May and the dismal performance of its secular rival Fatah in the West Bank. The group is also the de facto governing power in the Gaza Strip, and thus an unavoidable interlocutor in any effort to prevent a renewed slide to war and to rehabilitate the strip — a reality underscored by Israel’s own indirect negotiations with the group.

The U.K., however, has remained on the side-lines in all this. Given a longstanding policy of no-contact with Hamas by the U.K. and EU, the burden of European mediation efforts and dialogue with Hamas has often fallen on European civil society organizations, some of which are based in the U.K. and/or comprised of U.K. nationals. Contacts with Hamas have also extended to senior former U.K. officials, including ex-prime minister Tony Blair.

The backchannels established by these organizations and individuals have at times played important but discreet roles in mediation efforts, while providing European and British diplomats with valuable insights into Hamas’s strategic thinking. In parallel to this, British organizations operating on the ground have provided crucial humanitarian aid in response to Gaza’s deepening socioeconomic crisis. All of these crucial activities will now be under increasing pressure and legal risk in the wake of today’s vote. U.K. diplomats, meanwhile, will be left further in the dark. 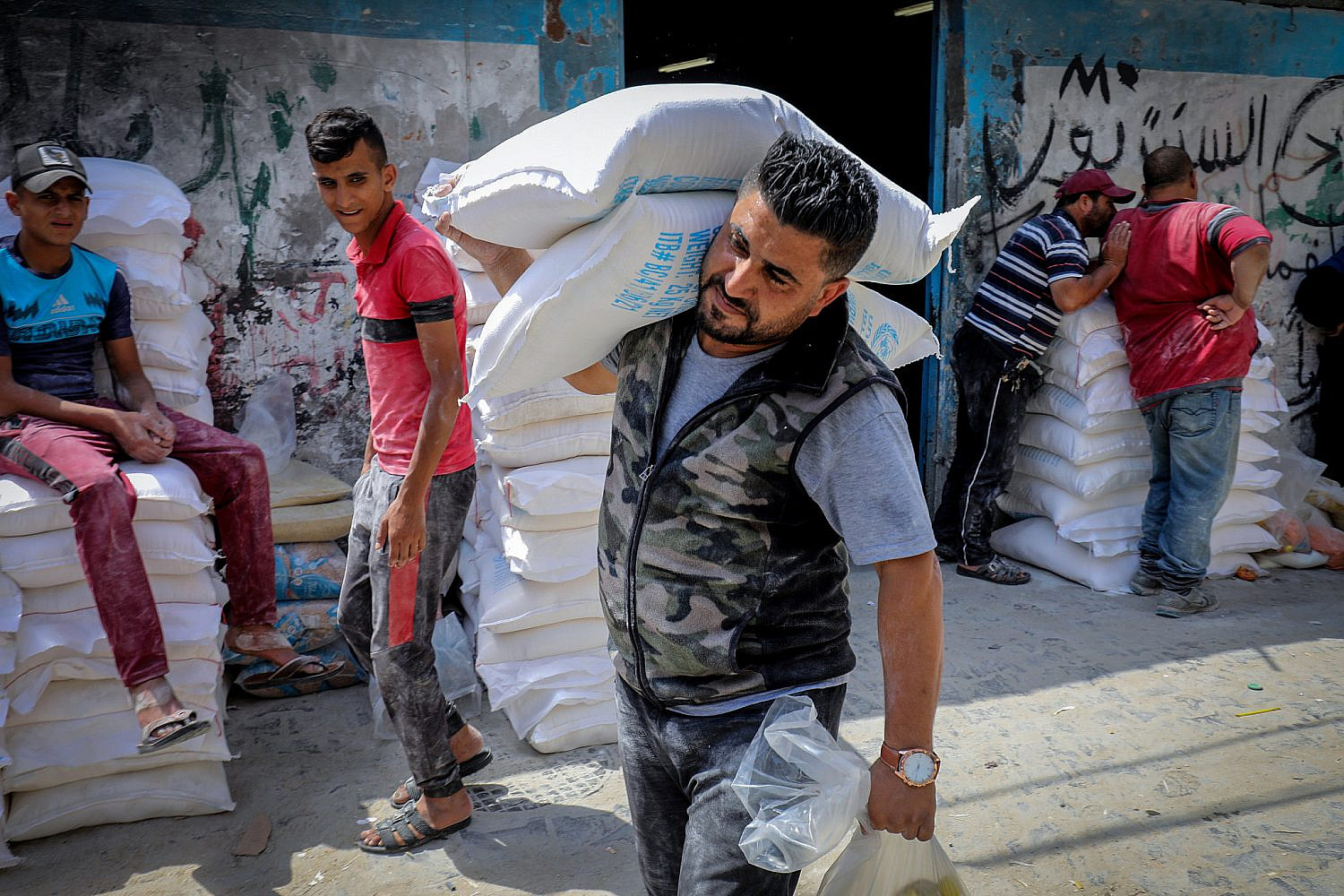 Knowing this in the past, the Home Office issued a legal clarification in 2015 that “genuinely benign” engagement with proscribed terrorist groups to advance peacemaking efforts and facilitate the delivery of humanitarian aid should not be prosecuted. At a minimum, the government must reaffirm this protection and support for British NGOs that are involved in such difficult activities. Rather alarmingly, it has so far declined to do so.

There appears to have been no assessment of any of these challenges by the government, which has instead rushed through the legislation less than a week after Patel first announced it. All of this highlights the lack of any real U.K. policy toward Hamas and the broader Israeli-Palestinian conflict, especially at a time when actors on the ground are rethinking their political strategies.

Indeed, moderate figures within Hamas have made engagement with Europe a top priority for years. Since winning free and fair elections in 2006, the movement and its leaders have repeatedly committed to a two-state solution based on the creation of a Palestinian state on the 1967 borders as a national consensus formula. Through its revised charter, published in May 2017, it has also sought to officially distance itself from its previous antisemitic positions. Damien Hinds, the Home Office Minister representing the government during Wednesday’s parliamentary debate, acknowledged that Hamas as a political body “no longer demands the destruction of Israel.”

This year, the group also recommitted itself to democratic elections and put forward a moderate political platform. The elections, though, were eventually canceled by President Mahmoud Abbas over fears his splintering Fatah faction would perform badly at the polls, and that he himself would be ousted from the presidency by a Fatah rival.

Of course, Hamas is not a homogenous movement and not all its members espouse relatively moderate positions, reflecting the competing trends and divergences that exist internally. Nevertheless, the group is continuously factoring in domestic and international dynamics as it determines its strategic direction. Ultimately, it will choose the path that it believes can best achieve its objectives, foremost of which is ending Israel’s siege of Gaza and the occupation. 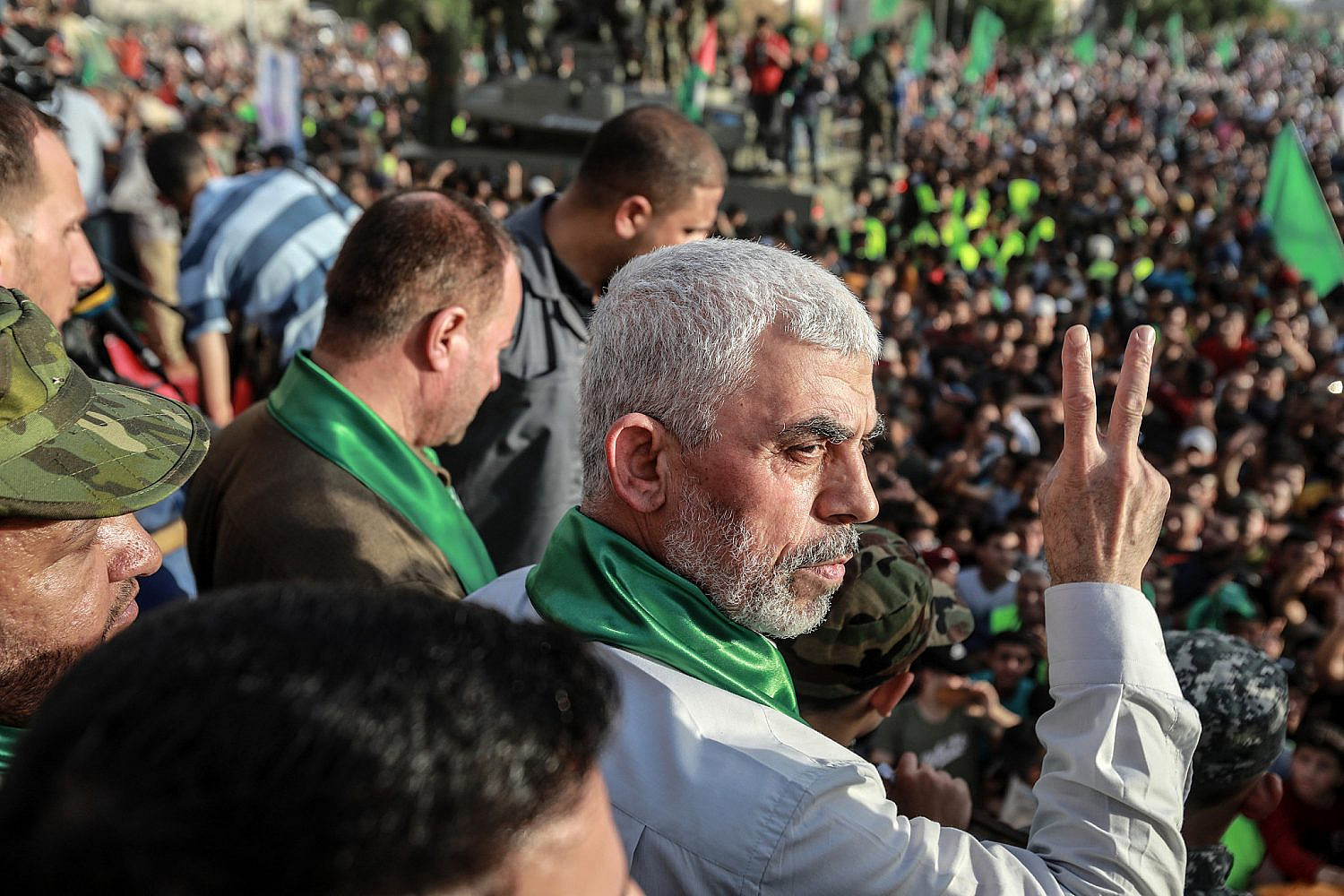 Yahya Sinwar, leader of the Palestinian Hamas movement, gestures during a rally in Beit Lahiya, May 30, 2021. (Atia Mohammed/Flash90)

The aim of international engagement should therefore be to incentivize and test Hamas’ claims to moderation. However, by instigating such a high-profile move against the Islamist group, the U.K. has effectively undermined the moderate voices within Hamas, and rewarded hardliners who maintain that only armed violence, not diplomacy, can succeed in challenging Israel’s military occupation. In parallel, the UK’s legislation will further complicate already difficult efforts to reunify and reform the Palestinian political system, which remains a sine qua non for a fully functioning Palestinian state and a sustainable peace agreement with Israel.

At the same time, the U.K. government continues to largely gloss over Israel’s own actions. Despite the change of government in Israel and the removal of Benjamin Netanyahu as prime minister, Israel continues to entrench a situation of apartheid through its unchecked settlement expansion and dispossession of Palestinians. It has also maintained a laissez-faire approach to settler violence, while criminalizing Palestinian human rights organizations, among many other policies.

While none of this can justify Hamas violence against civilians in contravention of international law, it is undeniable that Israeli actions pose an existential threat to whatever is left of the two-state solution, as the British government itself regularly admits, yet has done little to challenge.

Ultimately, ending Israel’s occupation and bringing about Palestinian self-determination is the best guarantee for a sustainable future. Negotiating peace with armed groups is never easy, as conflict resolution efforts in Yemen and Afghanistan can attest. Yet successful peace processes around the world, such as in Columbia and Northern Ireland, show that such engagement can deliver peace agreements. A British government which proclaims its commitment to the two-state solution would be expected to focus its efforts on these goals, rather than on domestic point-scoring.