The amendment to the Prevention of Infiltration Law permits the state to indefinitely detain African asylum seekers whom it cannot deport. A previous version of the law was struck down. 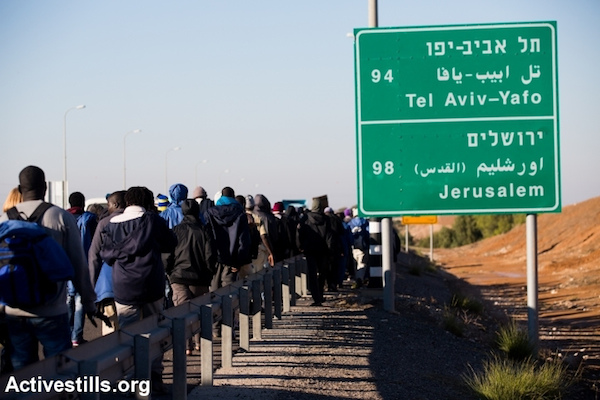 African Asylum seekers march out of the Holot ‘open prison,’ where they were being held, and march along the highway from Beer Sheva in southern Israel on their way to Jerusalem, December 16, 2013. (Photo: Activestills.org)

Israel’s High Court of Justice was expected to decide whether to uphold or strike down key parts of a law that allows the indefinite detention of African asylum seekers in its ‘Holot’ detention facility.

The court struck down a previous version of the law, prompting lawmakers to quickly draft a replacement — one that introduced even more severe problems.

A key intention and consequence of the new law that the justices will have to reckon with is the pressure Israeli authorities put on asylum seekers to return to the countries from which they fled. Justices were critical of the state’s arguments when it heard the case in April of this year.

With a sensitivity toward the court’s international standing, justices may have noticed a number of events overseas in recent months.

In one rebuke of Israel’s asylum policy, a Swiss court granted asylum to an Eritrean refugee — on the grounds that he had been ordered to appear at Israel’s desert detention facility.

A far more public criticism of Israel’s asylum policy, at the center of which lies Holot, came in the form of an 83-page Human Rights Watch report that documented some 7,000 African asylum seekers whom the state has coerced into “voluntarily” leaving the country.

International refugee law is clear that a decision to return to the country from which one fled cannot be considered “voluntary” if the only other option is remaining in prison.

Two successive Israeli interior ministers, along with a number of other politicians, have stated quite clearly that they see their goal as encouraging those African asylum seekers — whom it can’t deport — to leave. Concurrently, their ministries have rejected over 99 percent of all asylum applications from Sudanese and Eritrean nationals.

Refugees, both those who are already in Holot and those in danger of being sent there, have launched a number of high-profile public protests this year — protests that raised the profile of their plight but did little to find solutions for them.

As I wrote earlier this year:

There is no clear, immediate and tangible next step for either the government or the asylum seekers. The new law was challenged just days after it came into effect and although it could take months or even years, the best chance at changing Israel’s asylum seekers policy still lies in the hands of the High Court. But even if the law is stricken down, and there is no clear indication that it will be, that alone does not prescribe a solution.

For a comprehensive review of the historical and political developments that shaped Israel’s current African asylum seeker crisis, read “The origins and politics of Israel’s refugee debate.”