In a series of posts based on field visits and meetings with migrant workers in Israel, Noa Shauer and Shiraz Grinbaum highlight the conditions, hardships and exploitation of foreign workers. In part 3, agricultural workers in Moshav Yavetz suffer harsh neglect, are stripped of their right to decent pay and live in insufferable conditions. 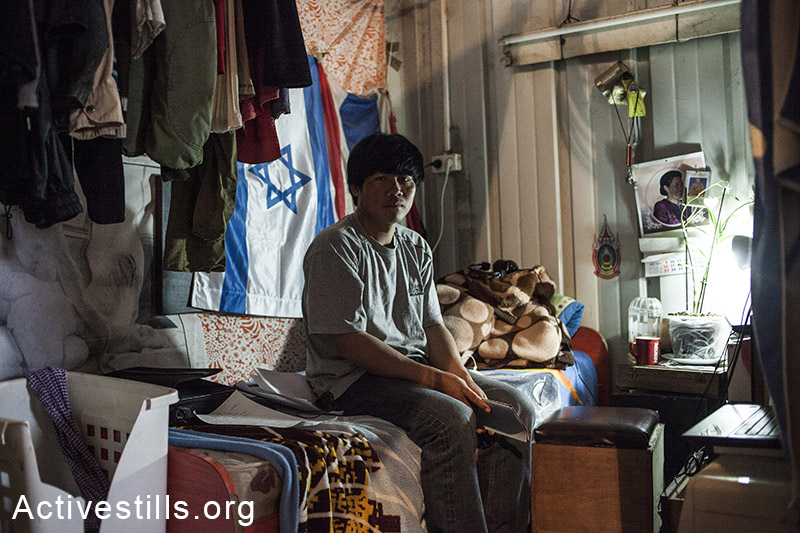 A Thai agricultural worker sitting on his bed inside a shipping container, which serves as the group’s residence, Moshav Yavetz, January 25.1.2014. (Shiraz Grinbaum/Activestills.org)

We arrived at Moshav Yavetz following a request submitted by workers on the ‘Kav LaOved – Workers’ Hotline’ Facebook page. The workers wrote about their poor living conditions and asked us to come for a visit. We traveled to see their living quarters using side roads, through the moshav’s orchards and greenhouses, in order not to attract the attention of its residents.

Upon arrival, we saw a temporary structure with a beautiful yard fenced with bamboo sticks. Initially we were happy that these were the workers’ quarters, but quickly learned that they belonged to the family members of a moshav farmer. We asked the workers about the relationship with their neighbors and they said there is absolutely no relationship, and that the has family instructed their children to keep away from the Thai workers’ residence. About 20 meters away stood a shipping container. “So that is where the workers are housed,” we said as we gazed, disappointed. 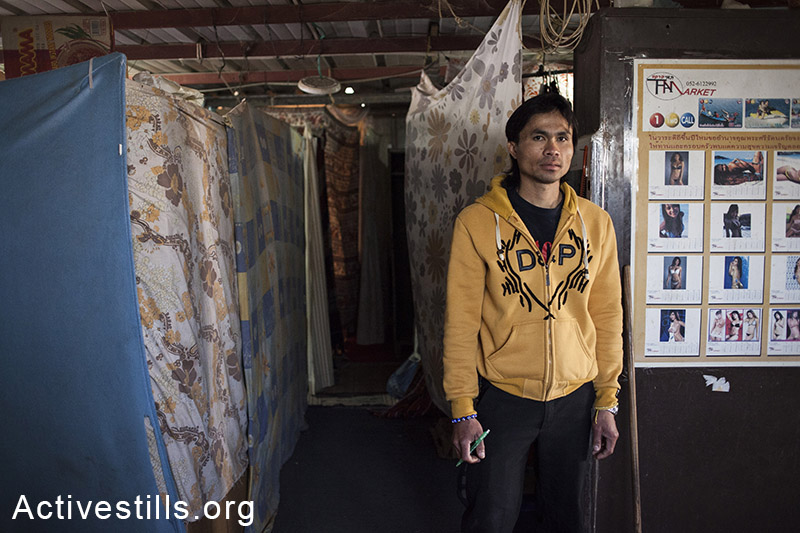 During the visit we met 20 workers, most of whom lived in the container (along with some from the neighboring villages). The workers told us that they earn NIS 140 for eight working hours and NIS 20 for each overtime hour. They work between 8-10 hours a day, and only recently did their pay get bumped up from NIS 130. The workers say that due to the wage increase, the employer is urging them to finish their work quickly in order to avoid paying overtime. Their salaries are usually paid two weeks late.

On half days, the workers receive half the pay, despite a law that prohibits employing agriculture workers part time or on an hourly basis. They are paid in cash and hand their wages to a private traveling agent who comes by to collect the workers’ money and transfer it to Thailand. As a condition for receiving it, the employees are forced to sign a document stating that they received their full salary and have no other claims. We suggested they publish a statement in Thai – the only language most of them know – declaring they were subject to pressure upon signing, in order to annul the effect of their signature.

The workers never receive any pay slips and never had the opportunity to open their own bank accounts. Furthermore, they did not know the exact amount deducted from their salary every month. 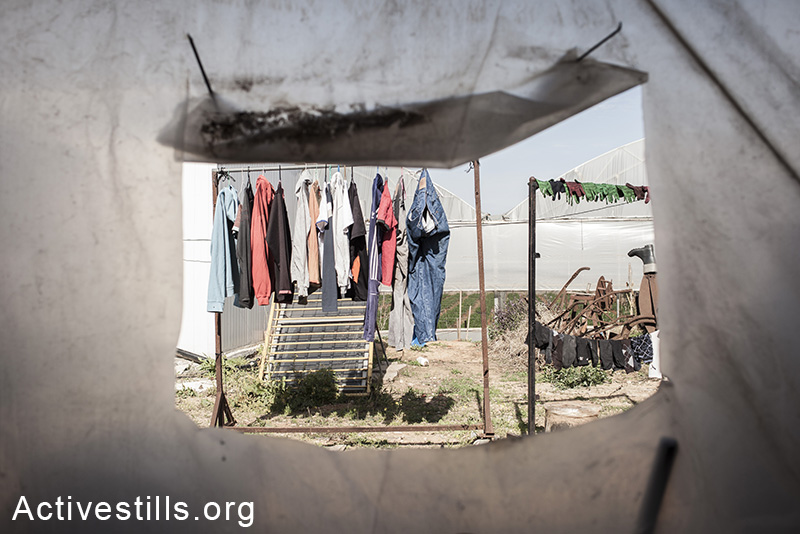 A view outside the shipping container, where the workers hang their clothes to dry, Moshav Yavetz, January 25.1.2014. (Shiraz Grinbaum/Activestills.org) The workers buy their food either in the nearby city of Qalansuwa, or from a food truck that passes between the local villages. Apart from one worker who cut his hand badly, none of them has ever been to a doctor in Israel, nor have any of them ever received a health insurance certificate, as legally required by their employer. Actually, they do not know anything about their health insurance. We explained to them about health services in Israel, as well as their right to see a doctor whenever necessary, stressing the fact that if the doctor instructs them not to work, the employer must pay them a regular wage for every sick day.

The workers’ job involves spraying the fields with pesticides twice a week for three hours each time. Only two months ago were they first provided with protective measures such as masks. The workers say they are thankful for the measures, but claim that no one explained them how to use the masks nor how to spray safely.

The employees live in a big shipping container, which is divided into five rooms separated from each other by sheets and furniture, rather than by walls. The container has only one central light bulb. Five employees share one toilet unit and one shower. The bathroom is constantly flooded and the shower is nothing but a pipe that runs through the outer wall of the container. There is a small kitchenette with a fridge and an electric stove for cooking. 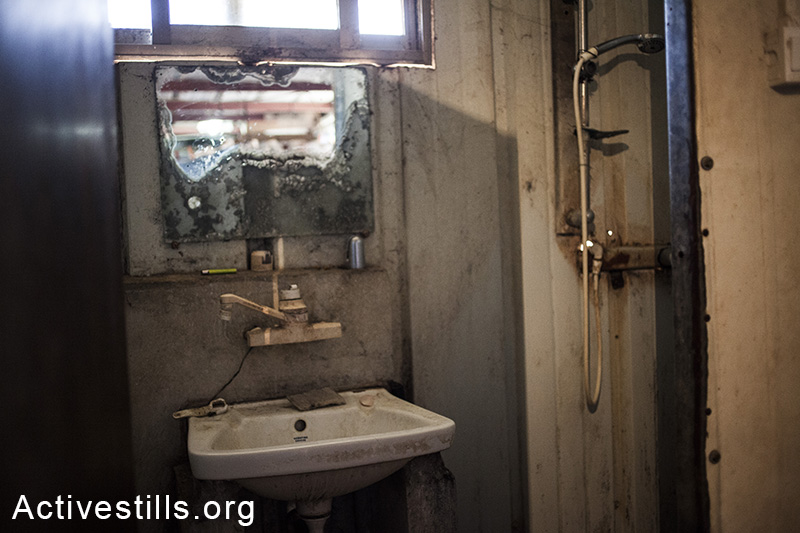 The toilet and shower inside the worker’s residence, Moshav Yavetz, January 25.1.2014. (Shiraz Grinbaum/Activestills.org) A view inside the shipping container used as the group’s residence, Moshav Yavetz, January 25.1.2014. (Shiraz Grinbaum/Activestills.org)

The closets are used as a separation between sleeping spaces, and there are no lockers. The employees got ahold of all the items in the container, including bed covers, among others. They showed us a small heater used by all five tenants in the winter. In the summer temperatures are so high that they cannot stay nor sleep inside, and resorted to building a small nylon roof outside used as a makeshift living room. A view inside a caravan used to house two Thai agriculture workers, working for a different employer in the moshav, Moshav Yavetz, January 25.1.2014. (Shiraz Grinbaum/Activestills.org) 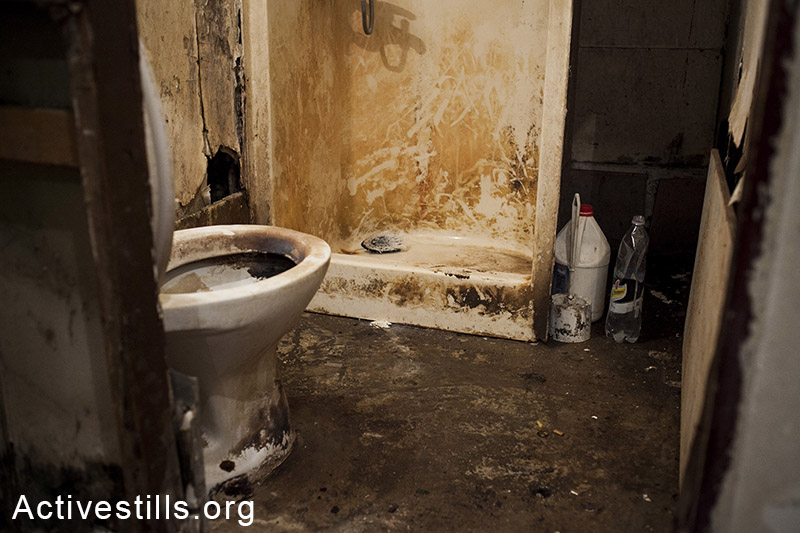 The toilet and shower inside the caravan, Moshav Yavetz, January 25.1.2014. (Shiraz Grinbaum/Activestills.org)

The workers are seeking to improve their employment and living conditions. We promised to accompany them in the process – to help and report to anyone who might be interested about the difficult conditions we witnessed.