Security officials have launched a public campaign painting the ‘Great Return March’ as a violent, Hamas-sponsored event. Israel has never needed excuses to violently suppress Palestinian protests, which makes this a priori justification of violence all the more worrying. 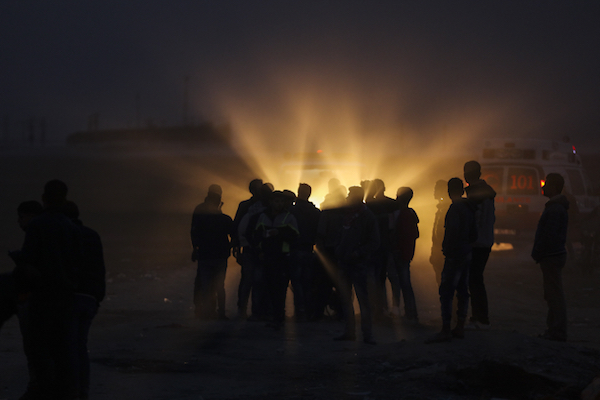 Israel’s senior-most defense policy official once famously told American diplomats that “we don’t do Gandhi very well.” Israeli security forces, Defense Ministry policy chief Amos Gilad was explaining, don’t really have the means or patience to suppress mass, nonviolent Palestinian protests without employing disproportionate violence themselves — nor are they willing to allow such protests to occur without being suppressed.

It is no surprise, then, that in preparation for a series of mass, nonviolent marches along the Gaza-Israel border starting this weekend, the Israeli army’s chief of staff announced the deployment of 100 special forces snipers and several infantry brigades to the area. There will be Palestinians casualties, the generals told Israel’s security cabinet.

Yet the Palestinian organizers of the “Great March of Return” insist that their movement is nonviolent. “We’re against stone throwing or even burning tires,” Gaza-based organizer Hasan al-Kurd told +972 Magazine this week. “We will make sure the protest doesn’t escalate to violence — at least from our end.”

It is the Israeli side that worries the march’s organizers. In Gaza they have been watching with no small amount of anxiety as the Israeli security establishment, through the echo-chamber of Israeli media outlets, has framed their march as a Hamas event. They understand that introducing Hamas into the equation serves as an a priori justification for Israel to employ violence against them; for if the marchers are inherently violent, then surely deploying 100 snipers is a reasonable precaution. 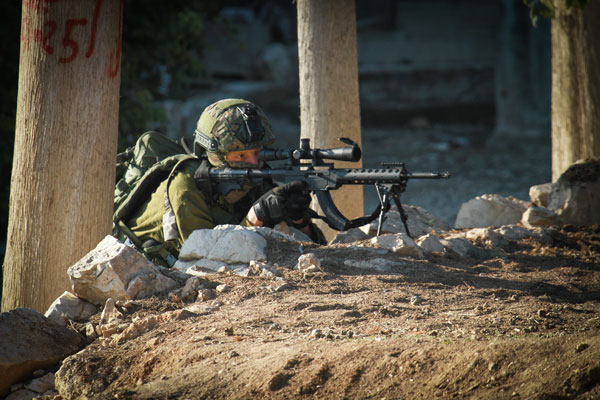 An Israeli army sharpshooter takes aim at Palestinian protesters on the edge of Nablus in the occupied West Bank, December 8, 2017. (Nasser Ishtayeh/Flash90)

Hamas’s participation, however nominal or considerable it may be, is a non-sequitur. Even if the Islamist movement’s role in the march is larger than the organizers are willing to admit, history teaches us that Israeli security forces will employ violence against the marchers anyway. Hamas is a convenient excuse but one that isn’t actually necessary. Israel has never needed a justification to violently suppress Palestinian political activity — especially when masses take to the streets.

In the West Bank, Israeli security forces regularly respond to unarmed and often nonviolent protests with deadly force. The Israeli army regularly employs sharpshooters against unarmed protesters. And along the Gaza border, where the army imposes a no-go zone on the Gazan side of the fence, protests regularly result in Palestinian casualties. 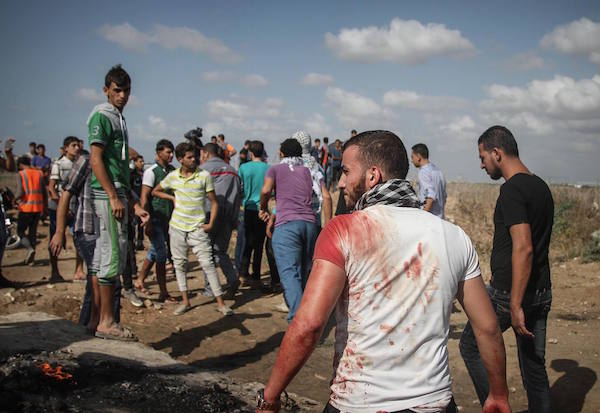 A bloodied Palestinian protester is seen at a protest in the eastern Gaza Strip that left six Palestinians dead and over 130 injured when IDF troops opened fire over the border, Gaza Strip, 9 October, 2015. (Ezz Za’noun/Activestills.org)

By declaring Friday’s protest action to be violent before it even occurs, the army’s own violent response becomes something of a foregone conclusion. Perhaps the most worrying harbinger of what may play out this weekend in Gaza, however, is the way the IDF responded to a series of similar “return marches” on Israel’s borders in 2011.

Speaking with +972 Magazine earlier this week, one of the Great Return March’s organizers reiterated over and over again that while they would not be surprised by violence from the army, they do not want confrontations or clashes. Asked if he has a message for the Israeli public, al-Kurd answered in the affirmative: “We are reaching out to them, holding an olive branch.”

Yet the Israeli establishment seems incapable of hearing that message. From nonviolent marches to boycotts to international pressure campaigns, Israel’s position has always been that there is no legitimate form of Palestinian resistance to the occupation. It is precisely because Israeli authorities need no excuse to mete out violence against Palestinian protesters that the public campaign painting this weekend’s march as a Hamas event, as inherently violent, is so worrying.