Israeli media insists on portraying the West Bank as the Wild West and its Palestinian inhabitants as savage stone-throwers, all the while masking the reality of armed settlers and a trigger-happy military.

If I were to describe a movie equivalent of the West Bank in words, it would be part way between a scene from John Carpenter’s Escape from LA, mixed with a little of your favorite Spaghetti Western, with strong hints of Heart of Darkness – the book, not the movie.

Well at least that’s the impression I get from some of the Israeli press, which then filters down into the psyche of the people, who get an image of a savage territory with pockets of light built by the settlers.

I won’t mention that most of these settlers have formal military training as part of their conscription, nor that they are often heavily armed. No, that wouldn’t be right. I won’t bring up the fact that there are a number of settlements around the West Bank from which the residents often go on rampages against the nearby Palestinian villages, destroying trees and other crops. I won’t even point out that over the years “civilian” settlers have killed dozens of Palestinians. I’m not going to mention any of those points because that would distort the image. 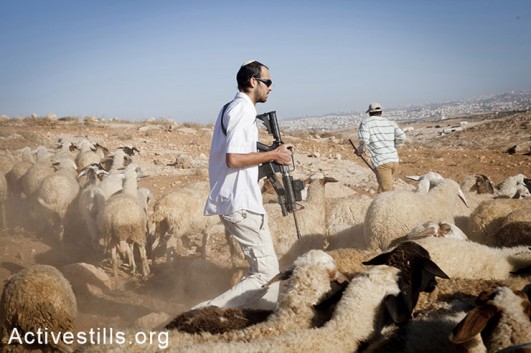 A Jewish settler from the illegal settlement of Mitzpe Yair chases a flock of sheep and threatens their Palestinian shepherds from Gwawis. He is holding an M16 rifle, issued to him by the Israeli army, as part of his paid job as a security coordinator. The law states that he is not allowed to take any action outside the settlement’s borders, September 18, 2012. (photo: Shiraz Grinbaum/Activestills.org)

No, the image presented by Israeli politicians and, by extension, the press is one of settlers attempting to coexist with bloodthirsty Palestinian savages. As Israeli politician and settler David Rotem once told me, and I paraphrase here: “We even let the Palestinians harvest their grapes from their land that is now in the settlement security fence.”

Where am I going with all this?

Well, on August 25 there was an incident reported in the Israeli media about a settler couple with an infant being stoned on their way home. The result of the stoning was that a rock hit the husband, who was driving, which led their car to overturn.

But there was a surprise element: According to the wife, the family was immediately aided by Palestinian bystanders (she could tell they weren’t terrorists. Her words not mine) and a Palestinian Red Crescent ambulance. And one got the feeling from reading the various articles that this humanitarian gesture was somehow odd.

On a side note, Arutz Sheva, the Israeli settler press, had a headline in their coverage of the incident saying, “Rocks Are as Dangerous as Rockets.” I’m fairly certain that if Israel had shelled Gaza with rocks rather than rockets for the past two months the outcome would have been a completely different story.

Israeli media always likes to look at one certain convenient event and quickly point the finger, and say, “They started it.” It isn’t constructive, and it doesn’t get down to the root cause of things: Why do Palestinians throw rocks?

Of course many Israelis are indoctrinated with the concept that Palestinians throw rocks to kill Israelis, and this is simply not true. Can rocks thrown at cars kill? Yes, and in the past they have. But most youth and children throw rocks because they are frustrated, they are at a rebellious age or, quite simply, because they are bored, and living under occupation limits the options for channeling that energy more constructively. 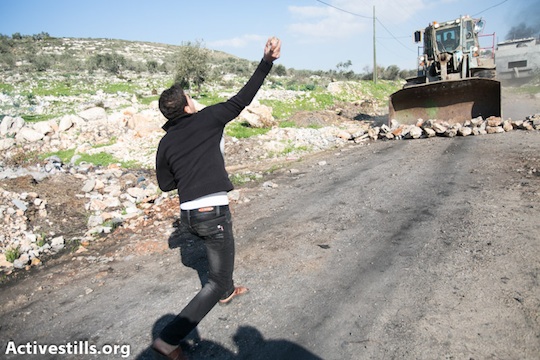 When they throw stones they aren’t thinking of killing or even maiming. Many of them probably just enjoy the sound of glass breaking (and for the record many, Arab cars have been stoned by mistake). But they are frustrated, and the root cause of their frustration is the occupation, and a symbol of that occupation just happens to be driving by at the time.

As for the surprise in the Israeli media about the Palestinians coming to the aid of this family, I have a first-hand example of my own. One afternoon not very long ago, while driving home from Hebron, we saw a settler car overturn in front of us (no rock throwing, just bad driving). Myself, along with almost two dozen other Palestinians who happened to be on the road at that time, stopped to rescue the lady and her daughter. They were settlers, but they were human beings first. We administered first aid. We called an ambulance. We gave them water. They were obviously in shock so we paused our journey to stay with them.

That is to say until another settler called in the army, which arrived with fingers on the triggers and ordered us out of the area like we were all a bunch of thugs about to lynch the mother and her daughter with bandages and rubbing alcohol.

The bottom line? Israeli settlers have been an instrumental element in the ongoing oppression of the Palestinians living in the West Bank. Their presence in settlements on Palestinian land is illegal. Their attacks, including “Price Tag” attacks, against Palestinian citizens is indiscriminate, but under what part of that equation should our humanity ever be called into question?