Reporters seize upon the list of Gaza’s most recent victims, only to parse their death certificates for proof that they, too, did not deserve to die.

“Journalism,” wrote the Swedish war correspondent Stig Dagerman, “is the art of coming too late as early as possible.” The dictum resounds in Gaza, where an eight-year Israeli siege – which has left this land all but unlivable – went woefully underreported well before Gaza was is in the throes of war. As Palestinian families again count their dead, that journalistic negligence, say human rights workers, leaves much of the reporting here dangerously devoid of context.

One glaring example of this is the notion that Palestinian civilians are only killed when Israel launches full-scale assaults – by air, land and sea – “to defend itself.” In fact, death by Israeli fiat is as routine here as the siege itself.

Consider the case of Odeh Hamad, a young man who was fatally shot by Israeli snipers on December 20, 2013. Hamad was collecting scrap metal to sell for cash – a familiar stop-gap of Gaza’s unemployed, who, even before this latest Israeli assault, represented more than 40 percent of Gaza’s population. According to his brother, who was with him and spoke a day after the killing, Hamad was a kilometer away from Israel’s unilaterally delineated “border fence” when he was shot, posing no threat to the heavily armed soldiers in their concrete turrets.

Hamad, of course, was not the first to be gunned down along Gaza’s so-called “buffer zone,” which at the time rendered off-limits “nearly 14 percent of Gaza’s total land and at least 48 percent of [its] total arable land,” according to Harvard researcher Sara Roy (the estimates are higher now). You wouldn’t know it from the Western press, though, which has largely ignored the buffer zone and its consequences.

It’s all the more galling, then, when reporters seize upon the list of Gaza’s most recent victims, only to parse their death certificates for proof that they, too, did not deserve to die. Case in point: On August 5, The New York Times ran an article by Jerusalem bureau chief Jodi Rudoren titled, “Civilian or Not? New Fight in Tallying the Dead From the Gaza Conflict.” The money quote, according to Mahmoud Abu Rahmeh of the Al Mezan Center for Human Rights, is this:

“Human rights groups acknowledge that people killed by Hamas as collaborators and people who died naturally, or perhaps through domestic violence, are most likely counted as well.”

When I asked Abu Rahmeh what he thought about Rudoren’s report, he told me his organization was disappointed by the “lack of professionalism” in the Times’ coverage. “Al Mezan is in contact with the paper and is seeking to publish a letter to the editor to explain the flaws” in Rudoren’s piece, he said.

For her part, Rudoren tweeted on August 10 that “Al Mezan never said people killed by methods other than Israeli attacks were in its final counts.” But her point – that those “perhaps” killed by domestic violence could skew the Palestinian body count – remained unchanged.

Human rights workers here say Rudoren’s reporting perpetuates the idea that Palestinian victims of Israeli attacks are just numbers to be counted. To illustrate the point, another Al Mezan employee, who asked that his name be withheld because he is not authorized to speak on behalf of the organization, told me about his colleague, Anwar Al Zaaneen, who was killed by an Israeli drone strike in Beit Hanoun six days after Rudoren’s report was published. 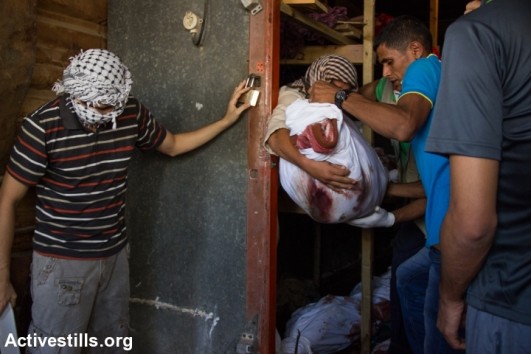 Bodies are removed from Kuwaiti Hospital after Israeli attacks in Rafah, Gaza Strip, August 3, 2014. Since Al Najjar Hospital was closed, Kuwaiti, a nearby private hospital, opened its doors for emergency cases. With no space to store bodies, they have been stored in a nearby cooler used for vegetables and flowers (photo: Activestills)

That Al Zaaneen’s death hasn’t registered in Rudoren’s reporting may speak volumes about the travesty of her coverage, but his colleague says Al Zaaneen’s story is as much about the individual tragedies most observers of Gaza miss.

Al Zaaneen, he tells me, “was the type who did everything to avoid this conflict.” He sent his family to what he thought was a safer place and was careful to avoid going out at night. He spent most of his days at the office, where he would wait out the bombing. But when he needed to tend to water repairs at his house in Beit Hanoun, near Gaza’s northern border, his luck ran out. A drone missile fatally wounded him just after 1 p.m. on Sunday.

Al Zaaneen’s story is all too familiar. But the circumstances of his death also help to explain one of the main questions raised by Rudoren’s report – why the majority of those killed in the last month have been men of “combatant” age. According to the newspaper of record, Al Zaaneen’s age, 41, puts him outside the cohort of men “most likely to be militants.” But like men younger than him, he was also more likely to try to keep his family – including the women and children among them – out of harm’s way, checking on his house and running errands on his own.

No such logic was presented by the Times, of course. Meanwhile, Al Mezan’s Abu Rahmeh tells me that the paper’s misleading report not only diminishes the human cost of Israel’s war, it “jeopardizes the rights of the victims” and their surviving family members. With so many lost and even more mourning, the real question surrounding Gaza’s “death count” isn’t how it’s tallied, but why it’s so staggeringly high – by any standard.

The answer lies not in the talking points of Israel’s defenders – chief among them that Hamas “hides” behind Gaza’s civilian population – but in the pattern of violence long visited upon that population by their occupiers. Journalists who fail to report that context are complicit in its perpetuation.

Related:
The battle over numbers: Gaza conflict is about quality not quantity
New York Times erstwhile definition of a ‘quiet night’: Five Palestinians killed
When ‘The New York Times’ embeds its reporters with the IDF