Israeli governments have neglected the poor neighborhoods of Tel Aviv for decades. Today, Knesset members use the asylum seekers to channel the anger of local residents and score easy political points. 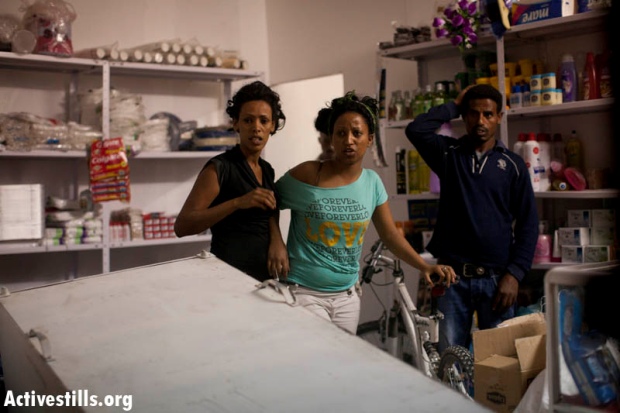 Eritrean refugees react less than a minute after their shop was attacked by a mob following protest against African refugees and asylum seekers in Tel Aviv’s Hatikva neighborhood on May 23, 2012.

For a moment, at around 11 p.m., it seemed that things were really getting out of control: Each report from the Hatikva neighborhood in south Tel Aviv was worse than previous ones: A couple of journalists – Haggai Matar from +972 and a reporter from Haaretz – were attacked and rescued by police; a mob of roughly 100 people tried to storm the Central Bus Station, considered a meeting place for African asylum seekers; a car was stormed by protesters, its windows smashed; at least two shops were looted; a woman holding a baby was struck in the head with a bottle, the baby to fell and both were rushed to a hospital; a man from Eritrea was chased by dozens of rioters and rescued by police.

Here is a short video of the attack on a car carrying African refugees:

After midnight, things calmed down a bit, and the night ended with several injured and 17 people arrested. It could have been much worse, if activists hadn’t warned African families to stay out of the streets, fearing violence. In daycares, notices like the one below were posted, urging parents to take their kids home early. If anything positive that can be said about last night, it’s the fact that no one was killed. 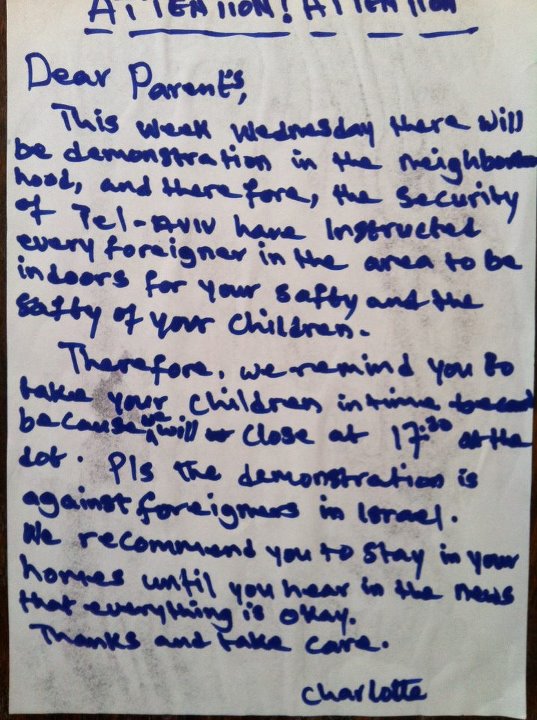 According to most estimates, there are between 50,000 and 60,000 African asylum seekers in Israel, most of them from Sudan and Eritrea. There are around 100,000 illegal aliens in Israel with expired tourist and work permits, but this has not kept populist sentiment against the African refugees from gaining momentum in the last few weeks.

In recent years, the refugees – who crossed Israel’s southern borders, mostly from war-torn Sudan and dictatorial Eritrea – settled in the poorest neighborhoods of Jewish Israel – in south Tel Aviv, Eilat, and Ashdod. The residents of the southern town of Arad have elected a new mayor from Avigdor Lieberman’s Israel Beitenu party, after she ran a campaign solely based around the promise to remove the aliens from town.

In south Tel Aviv, refugees – like the work immigrants who preceded them – moved into the area of the Central Bus Station (Shapira neighborhood), a poor area that was slowly going through early stages of gentrification. Later, Africans also settled in neighboring Hatikva, east of Shapira. Last night, the mob was stopped on the bridge over the Ayalon highway, which links the two neighborhoods.

The Jewish population in this area is very poor, and all of those neighborhoods have been neglected for years by the municipality and Israeli governments. The area around the bus station in particular has long been known as a center for drug trafficking, abuse and prostitution. In Kfar Shalem (near Hatikva), families of Sephardic Jews were evacuated from their homes recently to make way for new construction projects. The “Argazim” (boxes, in Hebrew) area nearby is one of the only places in Israel where Jews live in shacks and improvised homes, also under constant threat of evacuation. This socioeconomic foundation to the refugee problem is far more important than the statistics regarding their relatively small numbers or the actual crime rate. 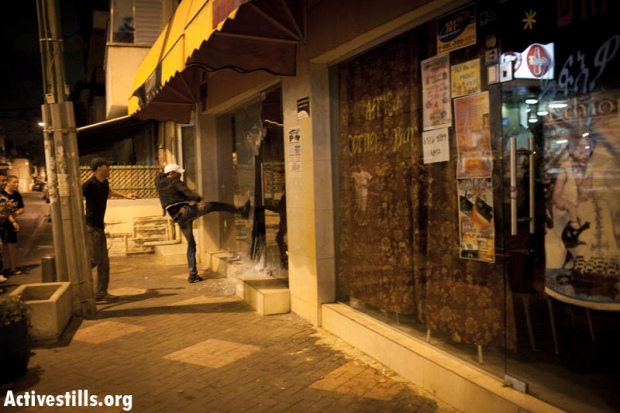 Rioters smashing the window of an Ethiopian bar during a riot in Hatikva neighborhood on May 23, 2012 (photo: activestills)

Regarding crime, it’s important to note that refugees are not allowed to work in Israel. Hundreds of refugees, most of them men, are homeless, and can be seen roaming the streets at nights, and not only in the south. On several occasions when I was out late at night in the last couple of months I was approached by Africans asking for food, money or cigarettes. There is no denying that desperation among the refugees is on the rise, and so are the reports in the media on violent crimes committed by them. The emphasis is on “reports,” because numbers from the last few months are unavailable, and according to previous statistics, the crime rate among asylum seekers was much lower than among the Jewish population.

I should also say that my personal feeling is that the media hype regarding the situation in south Tel Aviv was much stronger than what I have actually felt there. I don’t live in Shapira, but both my brother and sister do, and I spend quite a bit of time there. I never felt threatened and I thought that the headlines in the Israeli media – both Haaretz and Maariv wrote last week that the atmosphere in the area is “on the verge of explosion” – were an exaggeration. The media certainly played its part in promoting xenophobia and fear of the Africans (the common term in Israel is not “asylum seekers” or refugees, but rather “infiltrators,” the same term used to describe Palestinians who tried to return their lands and homes in the 1950s, and were regarded by the government as potential terrorists). 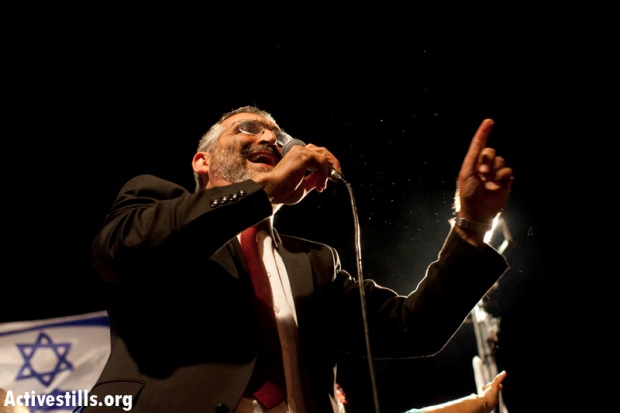 MK Michael Ben-Ari giving a speech at a protest against African refugees and asylum seekers in Tel Aviv’s Hatikva neighborhood on May 23, 2012 (photo: activestills)

More than the media, politicians are to blame for last night. According to most reports, the protest was initially very quiet, and local residents who spoke at the event weren’t as harsh on the Africans as the Knesset members – none of them live in south Tel Aviv, by the way – who took the stage right after them.

MK Miri Regev from Benjamin Netanyahu’s Likud party called the Africans “a cancer.” MK Danny Danon (Likud) said that they had established an enemy state, with Tel Aviv as its capital. MK Ben-Ari (Ichud Leumi, a national-religious party) called for every one of them to be imprisoned and deported. Ben-Ari used to be a member of Meir Kahane’s organization, which was banned in Israel and placed on the U.S.  State Department’s terror list. He is now serving in the Israeli parliament. There was even a representative of the so-called moderate Kadima party – MK Ronit Tirosh – who also said that all of the African infiltrators need to be deported.

All of those MKs know all too well that deporting the refugees is forbidden according to international commitments Israel has taken upon itself. Coalition members speak out against their own policy: after all, the government could deport the refugees and pay the diplomatic price for it. But it effectively chooses to leave them here while inciting the public against them.

Interior Minister Eli Yishai, who wasn’t present at the protest himself, said that if he were authorized to use “the right measures, not one African infiltrator would be here within a year.” The Shas leader didn’t say what measures he was referring to.  And above all, there is the deafening silence of Prime Minister Netanyahu, who spoke against the demographic danger posed by the “infiltrators,” but didn’t say a word about last night’s violence.

Israel has seen race riots before: In 1992, following the murder of a teenage girl by a Palestinian, local Israeli Jews stormed construction sites in Bat Yam, beating up Arab workers there. They were later joined by dozens of hooligans who wanted to help avenge the spilled Jewish blood. The police ended up completely blocking the city and the riots continued for five days. Since 2000, mobs have attacked Palestinians at least twice in the mixed cities of Nazareth Ilit and Akko, also cities with relatively poor Jewish populations. Both the mayors of Nazareth Ilit and of Akko were known for their violent rhetoric against Palestinians.

Untimely, this is what’s troubling the most about the current riot: the incitement is coming from the mainstream. Israel will soon enter a very long elections season – primaries will be held in the Likud and other parties within a year or so, and it seemed that many backbenchers have found in the refugees issue a populist theme that can promote their brand. Interior Minister Yishai, who has been losing support to Likud in all recent polls, was probably happy too last night, when he saw the signs with his name carried by the protesters in Hatikva, and heard the chants against Netanyahu (as I write this, Knesset Speaker Rivlin and Police Minister Aharonovitz ask MKs to show “restraint.” UPDATE: PM Netanyahu had since stated that “he feels the pain of the people of south Tel Aviv […] but there is no room for the actions and statements we have seen yesterday”).

It’s less the size of the flames that have me worried today, than the identity of those who are supposed to put them out. 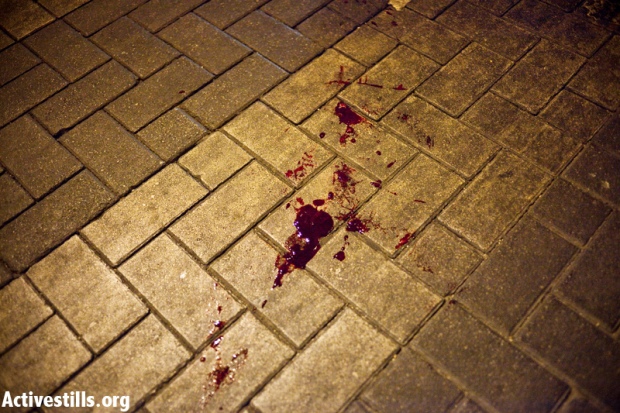 The blood of an African which was attacked during a riot in Hatikva neighborhood on May 23, 2012 (photo: activestills)