Certain rights should be inalienable — yet Israel refuses to grant them to Palestinians and the world continues to treat the country as a rights-based democracy. What does this absurdity say about human rights as a political tool, and about the powers, entities and institutions that speak in their name? 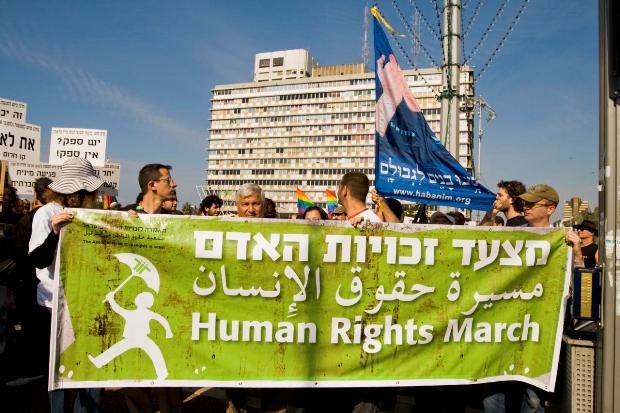 Knesset Constitution, Law and Justice Committee chairman MK David Rotem laid out some of his beliefs and world views in an extensive interview with Israeli financial daily Globes a few weeks ago. One of Rotem’s statements – which made the headline of the piece – was that “human rights are [reserved] for people who are citizens of the state.”

Rotem was referring the Israeli High Court of Justice’s decision to strike down, for the second time, an amendment to the “anti-Infiltration Law,” which authorized the prolonged imprisonment of asylum seekers who entered the country illegally. The final word in this legal battle has yet to be said, as Rotem’s committee will soon discuss and advance yet a third version of the law, which in all likelihood will be also be challenged before the High Court.

Yet when it comes to Israel’s decades-long occupation in the West Bank and Gaza, Rotem’s statement captures the entire logic of the system. This logic is tolerated, and often even accepted, by entities and institutions that see themselves as guardians of human rights. In that sense, that fact that a man like Rotem now heads the Israeli parliament’s constitutional committee is more telling than it seems. Human rights here are not a given, but something that are reserved for one category of people and deprived from another.

Many 20th century scholars, even liberal ones, have expressed doubts about the effectiveness of human rights as a political concept that can be used for advancing freedom and dignity for all human beings.

The fact that these “inalienable” rights were quickly attached to the concept of “national rights” and citizenship is even more troubling. Jewish philosopher Hanna Arendt pondered the fate of the person who is not entitled to citizenship – making it “legal” to strip him of his human rights, too. The result is a “legitimate” form of abuse, which could actually be worse than what preceded the idea of the “inalienable rights.”

This might sound too abstract — until one looks at the Palestinian case. The Palestinians in the West Bank and Gaza comprise an indigenous population, and are a people who were uprooted from their homes in 1947-1948, only to be reconquered by Israel 19 years later. Neither group has Israeli citizenship — or any citizenship for that matter. They don’t even have the legal status of “permanent residents,” as do Palestinians of East Jerusalem. They are the subjects of a military regime.

Naturally, when it comes to the decisions of the military commander, Palestinians have no say and no mechanisms for accountability. The army and the Defense Ministry, the sovereign in the West Bank, rule as they see fit. In other words, every Palestinian in the Occupied Palestinian Territories, regardless of their actions, has had his or her civil rights and many of their human rights revoked.

There is something misleading about the term “occupation” because, in theory, it represents a temporary state of affairs. And while it is true that the international legal system allows the temporary revocation of some rights of an occupied population, Israel’s occupation is permanent. It might not have been this way in the late 1960s, when it wasn’t clear what was in store for the territories Israel captured in the Six Day War. But once the Israeli government started settling its own population in the occupied territory — and even more so, once it began arguing before its own court that such settlements are within its rights — this debate regarding the transience of the occupation should have ended.

People tend to confuse “permanent” with “eternal.” The Israeli occupation is not eternal — no institution is — but it is as permanent as can be in this world. It’s already lasted longer than the post-WWII Soviet bloc, for example. Israel itself stopped treating the OPT as occupied, now viewing them as territories held by Israel under a different status than the rest of the state. Therefore, the act of revoking the rights of an entire category of people is also permanent.

This is something that, in theory, can’t been reconciled with the idea of human rights. How could we deny the inalienable rights? Yet the very same political entities that speak in the name of rights have come to tolerate, accept, and even cooperate and support holding of a certain category of people without said rights.

The international community as a whole tends to view the Palestinian issue as a problem of war and peace, or as a diplomatic issue, rather than an issue of rights. Instead of demanding to immediately return the Palestinians their rights (because rights are inalienable and cannot be revoked in the first place), and only then discuss where those rights will be exercised (within the State of Israel or within a new Palestinian state), the rights were forgotten and the debate focused exclusively on the issue of the state. On a side note, this is also where the deep roots of the failure to reach an agreement lie. The heart of the matter was, and still is, being ignored.

The institutions that speak the language of rights are the very ones that sealed the denial of the Palestinians’ rights. The Israeli Supreme Court, for example, will review cases from the OPT, but it will not uphold Israel’s basic laws (the closest thing the country has to a constitution) in the West Bank and Gaza. The High Court rejects or refuses to hear most petitions from Palestinians, and when it does, it usually approves all the major policies of the occupation – from the confiscation of land, to the transfer of prisoners, to deportations, to imprisonment without trial (“administrative detention”), to torture and targeted assassinations. The court has set certain guidelines and limits on those measures, but the underlying notion that Palestinians have no rights — and can therefore be treated differently than Israeli citizens — has never been questioned.

Once the court accepted this logic it went on to its mini-constitutional revolution of the 1990s, which won it the label of an activist institution. This too was all about rights — but these were the rights of the privileged class: citizens.

Onward, to the world: the United States, which endowed upon the world the very idea of inalienable rights, is preventing the Palestinians from taking their case to international courts. The Palestinians are regarded by all American administrations as people who need to pass various thresholds and litmus tests if they are ever to win back their (inalienable) rights. So far, they haven’t passed those tests — so their current legal status has become the normal state of affairs, while Palestinians’ efforts to challenge it are regarded as “unilateral” acts which need to be punished.

The European Union views its normative power on human rights issues as one of its sources of pride. Some see it as the essence or the EU’s legitimacy. The 1995 trade agreement between the EU and Israel even includes a clause in this spirit:

Yet the EU never attempted to reconcile these words with the existence of a population living without rights in the West Bank and Gaza. And when it did, instead of questioning the entire agreement, the EU duplicated the Israeli distinction between the “regions of rights” and the “regions of no-rights,” by moving to exclude the West Bank from the agreement. I support the EU policies regarding the settlements, but we should keep in mind that they don’t address the issue of rights; they only allow the EU to feel less complicit in their abuse.

We can go on with these examples (how about the American Jewish community – considered the most liberal in the States – and its ongoing refusal to view the Palestinian issue as a problem of rights?), but the bottom line should be clear by now: human rights are not “inalienable,” but are rather seen as something that can be revoked by a sovereign power.

In fact, as Israel denies the rights of millions of people, it is still considered to be a rights-based democracy, and therefore a natural partner and ally to the liberal West. In other words, it is the rights-based discourse itself that has allowed Israel to revoke the rights of an entire class of people and get away with it. Maintaining the rights of some made it possible to take away the rights of others; exactly as Arendt, Giorgio Agamben and others warned could happen.

Needless to say, Israel is not a rights-based democracy, if this idea has any meaning. As I argued here a few weeks back, it’s time the Palestinian issue became a conversation about rights rather than diplomatic solutions. Until then, the failure to address the occupation as such casts a long shadow on the very concept of rights as a political and philosophical tool for bettering the human condition.

Related:
Replacing the peace process with a civil rights struggle
A rights-based discourse is the best way to fight dispossession