Late Tuesday morning, July 5, around 11:30am, a convoy of IDF, Civil Administration, and Border Police arrived in the Palestinian village of Amniyr accompanying a flatbed truck with a front end loader and a backhoe.  Israeli settlers having a picnic at the settlement outpost next to the Susiya archaeological site looked on as the army destroyed nine large tanks of water and a tent. 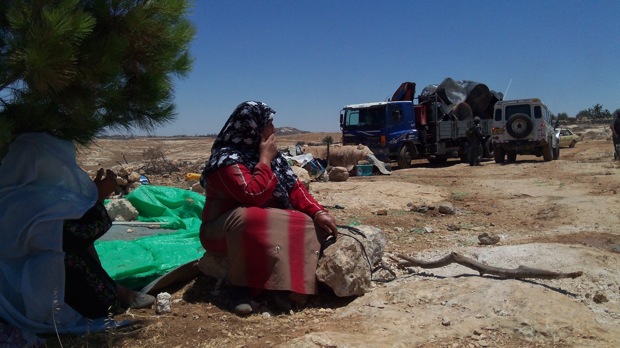 Amniyr is a small village of 11 families in the South Hebron Hills, just northeast of the Palestinian village of Susiya and the Israeli settlement of the same name.  The village of shepherds and farmers, like most villages in the area, is totally dependent in the summer on tanks of water.

That water does not come cheap.  Costs of transportation, due to the poor infrastructure in the area – Palestinians are normally not permitted to build roads in Area C of the West Bank and have restricted access to Israeli roads – mean the cost of water is much higher than normal.  A cubic meter of water in the nearby town of Yatta costs 6 shekels.  In Amniyr it cost 35.  The tanks themselves cost 1,000 shekels each, and each tank held 2 cubic meters of water, yielding a total of over 10,000 shekels in damage, which for many in the area is equivalent to a half year’s work.

This is the fifth demolition in Amniyr in the last year, according to village residents and Nasser Nawaja, a B’Tselem worker.  One month ago the army destroyed 11 houses and two cisterns full of water.  The cisterns had also been destroyed 5 months ago and rebuilt with the help of Israeli activists from Ta’ayush.  The ruins of houses from previous demolitions is still present, broken stones and twisted metal.  Located just south of the archaeological site of old Susiya, the Israeli government claims it is state land.

Ten of the families now sleep in Yatta and come during the day to tend to their olive and almond trees as they have no place to stay and no water.    But Mohammed Hussain Jabour and his wife Zaffra refuse to leave.  The morning after the demolition they were making tea on an open fire next to their tent. “I’ve been here with my father and our sheep since I was a little boy,” he said, with visible indignation.  “Now I’m an old man.  And now Israel tells me I can’t be here.  I’m not leaving.”

“What are we supposed to do?”  Zaffra asked.  “What will we drink?  We can’t live without water.”

The demolition comes on the heels of the demolition of 6 tent homes and a lavatory in the village of Bir al Eid, two kilometers to the south, two weeks ago.  Both incidents are the latest in a long history of demolitions of Palestinians homes and buildings in the area by the Israeli army, affecting both these villages and the villages of Susiya and Imneizel, a village south of Susiya.