The IDF’s Civil Administration prepares for the evacuation of the West Bank village in the wake of a High Court decision to uphold the rejection a zoning plan.

A Civil Administration inspector accompanied by soldiers arrived Sunday morning in Susya to take photos and measurements of village structures, further stoking fears among its Palestinian residents that they will be expelled from their homes at any moment.

Nasser Nawajeh, a resident, longtime activist and volunteer with B’Tselem, took the following photo of the official, who goes by the name Carlos. 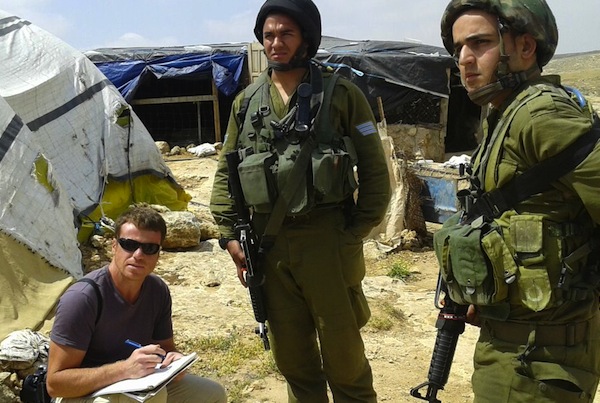 Israel’s High Court of Justice on Tuesday gave the army a green light to demolish the Palestinian village and forcibly transfer its residents out of Area C of the West Bank. The court refused to issue an injunction that would freeze any demolitions in the south Hebron Hills village before the village’s case is even heard and ruled on by the highest court of the land.

Justice Noam Solberg rejected the injunction requested by the residents of Khirbet Susya, who are represented by Rabbis for Human Rights. The case is a petition against the IDF’s Civil Administration’s decision to reject a master plan submitted by the village, and against the Israeli army’s plans to demolish the village and forcibly relocate its residents out of Area C. The Israeli army can now destroy the village at any moment, even though the case has yet to be heard by the High Court; a date for hearing has not even been set.

The 340 residents of Khirbet Susya have for years been fighting in court for the right to stay on their land. Susya is located in the south Hebron Hills, in Area C of the West Bank, which according to the Oslo Accords is under full Israeli control. Its residents were first expelled from their lands in 1986 after the Jewish settlement of Susya was established and an archaeological site built on its former location. The Palestinian villagers then moved the village to their adjacent agricultural lands and have been fighting to subsist there ever since.

In the petition, Susya’s residents argue that the army is obliged to legalize their village because it confiscated their land and their caves in 1986, leaving them without any housing solution and forcing them to move to their adjacent agricultural lands. 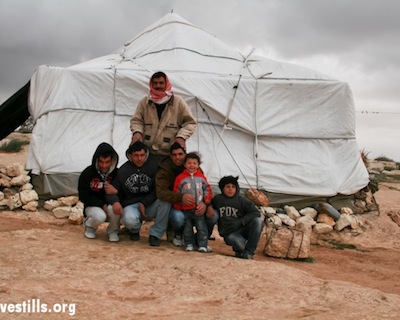 As evidence to the life in the village prior to the expropriation, various testimonials and photographs of life in caves were presented to the judge. Among other things, there were documented photos of a visit by U.S. consular officials to the village in early 1986, proving that the Palestinians lived there before the Israeli army declared it an archeological site. Other photos and evidence proved that the Susya is an old village that predates Israel’s occupation of the West Bank, Rabbis for Human Rights said. Several years ago, Nawajeh wrote in +972:

They call my village an illegal Palestinian outpost. But these have been our lands since before the establishment of the State of Israel. My father is older than your state and I am not legal on my own land? I ask you: where is the justice in that?

“Behind the Israeli authorities’ behavior is the aspiration, declared by Israeli officials at various times, to control these areas in order to facilitate circumstances that would allow their annexation in a peace agreement, and until then, de facto annexation,” B’Tselem wrote in a response to the court ruling.

“The Israeli authorities’ policy contradicts its obligation to meet the needs of the residents of the occupied territories and constitutes a grave violation of international humanitarian law, which prohibits their forced transfer,” the B’Tselem statement added.