You really have to give credit where credit is due. Even if it is to the IDF. Soldiers killed 12-year-old Muhammad al-Anati during clashes with local youth in the Hebron area on Sunday. According to reports, al-Anati was killed after being struck by a bullet in the back, and was not involved in the clashes. However, it seems that the IDF is willing to learn from past mistakes. This time, unlike recent similar events, the IDF Spokesperson’s Unit immediately released a message [Hebrew] saying an inquiry had been launched and that the army expressed its regret over al-Anati’s death. One can hope that the inquiry will be a serious and effective one.

For the sake of comparison, it is worth remembering that over the course of the 14 years that preceded Operation Protective Edge, the Israeli army killed 1,384 minors in the West Bank and Gaza. Among them was 13-year-old candy seller Mohammad Jihd Dudin, who was shot to death by soldiers during riots he did not participate in. In May, two youths were shot dead while not posing any threat to soldiers during clashes in Betunia, one of them in the back. The IDF Spokesperson’s Unit changed its official statement several times, and to this day has not shown remorse or found anyone responsible for the killing. 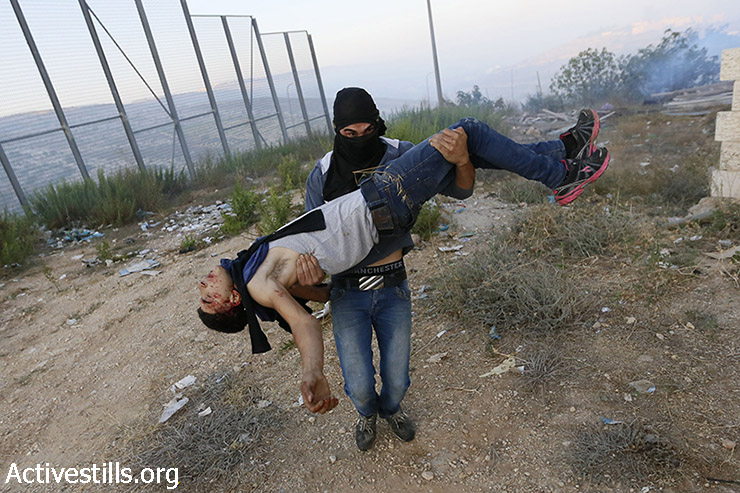 Palestnians carry Mohammad Qasem Hamamreh, after he was injured in the head with a tear gas canister at the early morning of July 23, during clashes with the Israeli army in the West Bank village of Husan, 2014. Mohammad, 19 years old, died in the hospital the day after (Mustafa Bader/Activestills.org)

Since the start of Operation Protective Edge, some 400 additional children have been killed in Gaza. Now another one is added to the list. I’m sure the al-Anati family takes comfort in the IDF’s expressing sadness over the killing.