The Tel Aviv District court has sentenced Anat Kamm to  four and a half years in prison. The sentence writes the final line in a campaign of  scapegoating that has already caused deep and lasting damage to independent Israeli journalism. 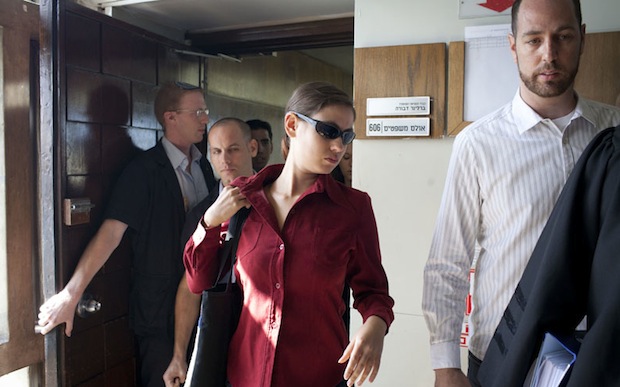 Anat Kamm, the journalist who leaked over a thousands pages of classified IDF documents to Haaretz journalist Uri Blau was sentenced on Sunday by the Tel Aviv District Court to four and a half years in prison. The documents, which Kamm copied while serving as a conscript clerk in the office of then-GOC Central Command Yair Naveh, contained a trove of information, including internal correspondence giving rise to suspicions of war crimes and direct violations of Supreme Court orders committed by senior IDF command. Kamm, who worked as a reporter for new portal Walla from her discharge and until her arrest, was already convicted through a plea bargain last year, with the prosecution agreeing not to ask for more than 9 years in prison for the journalist. A source close to Kamm’s defence team told +972 they are hopeful their client will not be handed a sentence longer than three years imprisonment; I must say I myself expected closer to seven years inside.

As can be seen from the exhaustive timeline compiled by my colleague Noa Yachot, there is a direct line running from the occupation, to executions without trial of suspects who could be detained, to a wider and deeper contempt for the rule of law and the Supreme Court, to the gagging of the press and to persecution of journalists. Kamm’s case is unique in weaving all these elements into a single story; but its real danger lies, of coures, in the unprecedented clampdown on a journalistic source – even more disproportionate than the sadistically vindictive persecution of Mordechai Vanunu.

I suppose considerable time will pass before we know when and how Kamm, out of all leakers, was chosen to be made an example of. But the chill effect on Israeli investigative journalism is undeniable. After years of dealing with the army, with leaks serving as bread and butter of defence journalism – in many cases informally sanctioned leaks, but leaks nonetheless – the army has decided to redefine the rules of the game. The double gag order on Anat’s case – it went unreported for nearly six months – and the media’s compliance with it were bad enough; the reluctance by the media to collectively stand up for Kamm and Blau is worse; but the most harrowing aspect of the Kamm affair is the things we don’t and will not know – the information on the state’s transgressions against its own laws and the trust of its citizens that will remain in the dark, because potential sources know now that neither law nor journalistic ethics can protect them.