As the BDS movement grows, U.S. churches find themselves caught between a history of anti-Semitism, and a desire to stand alongside Palestinians. 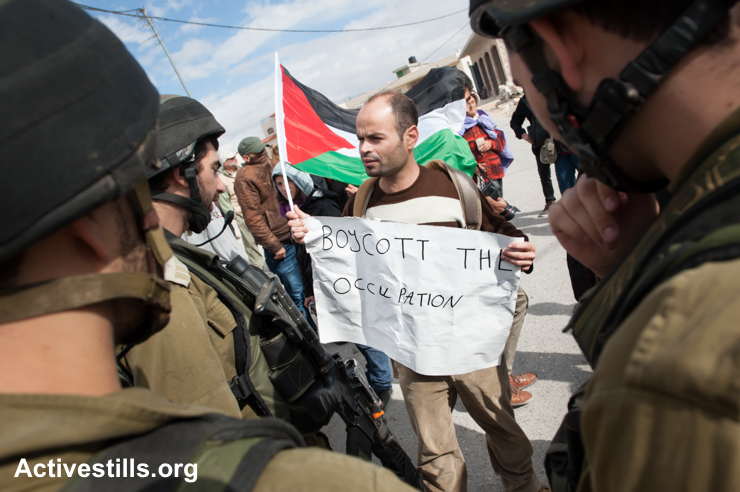 A Palestinian activist with a sign reading, “Boycott the Occupation”, faces Israeli soldiers during a weekly demonstration against the occupation and separation wall in the West Bank village of Al Ma’sara, November 9, 2012. (photo: Ryan Rodrick Beiler/Activestills.org)

In recent weeks, three U.S. churches considered resolutions to divest from occupation-complicit corporations. The United Church of Christ passed its measure with a landslide vote. The Episcopal Church’s resolution was rejected by its House of Bishops. And the Mennonite Church USA—my church—tabled its resolution for two more years.

These were only the most recent examples of churches considering some form of boycott, divestment and sactions (BDS) to apply economic pressure on Israel. Last year, the Presbyterian Church USA passed a divestment resolution, and the United Methodist Church and various Quaker bodies have taken similar actions.

Criticism following this round of debate was no surprise, and it’s easy to dismiss fundamentalist gems like this one by Earl Cox in The Jerusalem Post:

Anyone who supports a BDS campaign against Israel and claims to be a Christian is not telling the truth…. G-d will say to those counterfeit Christians, ‘Depart from Me. I never knew you.’ … They occupy church pews on Sunday but their knowledge of His Word is only superficial.

Cox doesn’t mention that the “depart from me” quote is taken from the Gospel of Matthew Chapter 7—which begins with Jesus’ apt advice: “Do not judge, or you too will be judged.”

It usually takes a right-wing fundamentalist with a literalist interpretation of the Bible to explain why all the stuff Jesus said about “blessed are the peacemakers” and “love your enemies” and “as you have done to the least of these you have done to me” have nothing to do with, say, Palestinian children in Gaza.

In response, I could be a left-wing fundamentalist and say that only true Jesus-following Christians support BDS. But I won’t. I know there are many reasons why people who actually care about things like peacemaking and human rights can’t get with BDS—some moral, some relational, some pragmatic (as in, people will stop donating to my church or organization if I support BDS).

What I can’t stand are accusations by self-described progressives or liberals against BDS that are simply untrue. These accusations come in the form of a question: What are these churches doing about [fill in the blank with thing ostensibly worse than Israel]?

While previous posts by myself and Dahlia Scheindlin drill down on this shopworn smear, a recent blog post by Mark Gammon on the religion site Patheos takes the “singling out” accusation to new levels, attempting to out-liberal the liberals by asking:

Have these denominations turned toward their own government’s moral failings? Have we divested from those who do business with the United States military, recognized by many worldwide as a tool of oppression? For that matter, have we given real thought to the fact that our ability to divest is predicated on our participation in an investment banking system that privileges profits over people – and has shown more than its fair share of moral and legal evil?

Gammon accuses BDS activists of a “breathtaking lack of historical consciousness” concerning Jews while displaying breathtaking ignorance about liberal activism. Every major mainline denomination has an advocacy office in Washington, DC, that lobbies on an array of social justice and human rights issues. I know because I’ve worked with several of these coalitions on issues like Latin America solidarity, domestic poverty, and anti-war activism. 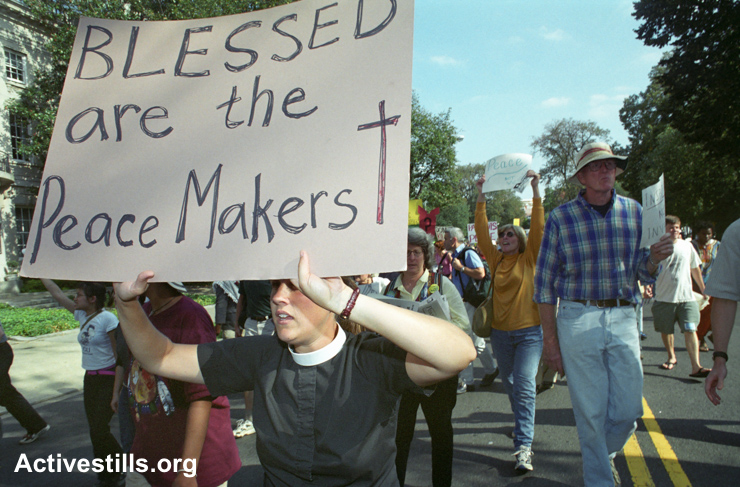 Photographic evidence that Protestant clergy protest things other than Israel. A priest marches in a demonstration against the U.S. invasion of Iraq, Washington, DC, 2002. (photo: Ryan Rodrick Beiler/Activestills.org)

In this context, it is not, as Gammon suggests, “hard to explain why Israel’s treatment of Palestinians has become a central liberal Protestant cause.” It is precisely because Israel has received more U.S. foreign aid than any other country—most of it military—that liberal activists are particularly interested. It would be a double standard if they were not.

If anything, BDS advocates could be excused if their activism was proportionate to the amount of their tax dollars at play. But every single church in question also provides significant humanitarian aid and human rights advocacy regarding the very countries often invoked as BDS foils: Syria, Iraq, Pakistan, Myanmar, etc.

The UCC is a prime example of a church already engaged in socially responsible investing that screens out investments in military contractors. Most other mainline liberal denominations do the same. Another major part of socially responsible investments is shareholder activism that attempts to influence corporations to behave more ethically. The UCC in particular engaged in shareholder engagement with corporations complicit in Israeli human rights violations, such as Caterpillar, whose equipment is used to demolish Palestinian homes. Divestment was considered only after years of such advocacy failed to produce results. 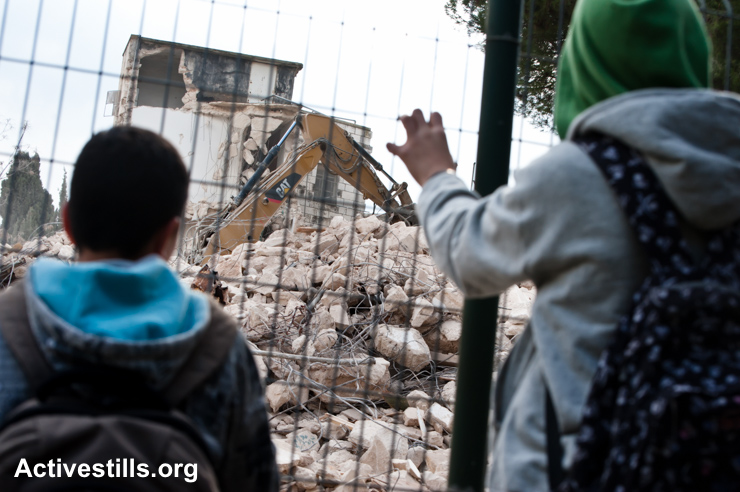 These churches have not “singled out” Israel. If anything, they’ve been extremely slow and hesitant precisely because of their historical consciousness. While there are certainly anti-Semitic elements within the ranks of the BDS movement—just like there are extreme elements within every activist movement—virtually all of the church resolutions include confessions of Christendom’s shameful history toward Jews, denunciations of anti-Semitism, and distinctions between the State of Israel and the Jewish people.

It is only because of the ongoing failure of the peace process and the call of Palestinians themselves—who can be excused for “singling out” Israel—that any of these churches have been willing to take a bolder stance.

But the heart of Gammon’s criticism is not the intention of BDS, but its effect:

The problem is singling out Israel as a special object of moral opprobrium while failing to acknowledge the Church’s role in cultivating a sense of existential threat among Jews. If Christian BDS supporters have to make a point of clarifying that they are not being anti-Semitic, certainly something has gone awry.

My translation: Christians can’t tell Jews that BDS isn’t anti-Semitic because Christians are primarily responsible for creating their existential fears in the first place.

This is where I would usually quote a bunch of Jewish supporters of BDS, including Israelis, to prove that BDS isn’t anti-Semitic. They don’t pretend to be “representative”—because they’re not arrogant enough to claim to speak for an extremely diverse community. But Jewish Voice for Peace is growing as the only nationwide Jewish pro-BDS organization in the U.S. and even liberal Zionists like Peter Beinart have lately been saying interesting things like, “Jewish kids are overrepresented in the BDS movement,” and arguing that mainstream Judaism must be willing to include “Jewish kids who are not Zionists, including the Jewish kids who are involved in the BDS movement.”

But while I think it’s good for church-based BDS advocates to lift up the voices of Jewish supporters, I also realize that one can also quote Clarence Thomas on civil rights. On questions of existential fears, I need to keep listening to the conversation taking place within the Jewish community.

As a white Christian man, I have no right to tell a Jew not to be afraid of me. Or people of color. Or women. I can only try to be an ally by standing with these communities when they are threatened. 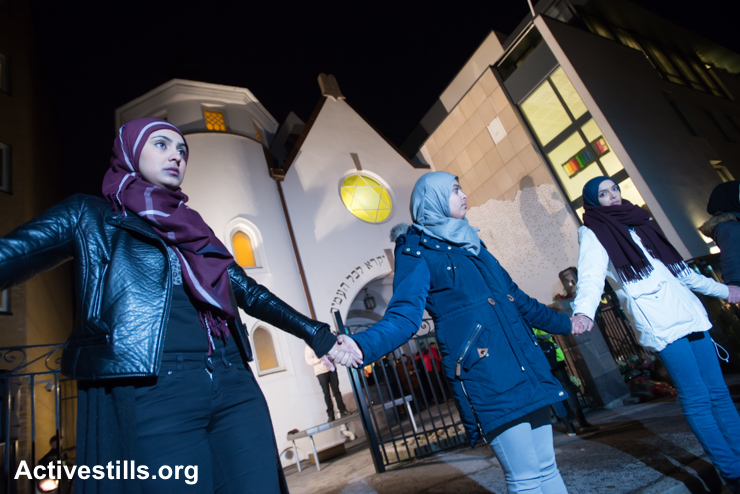 Young Muslim women stand hand-in-hand in front of the Oslo Synagogue during the “Ring of Peace” vigil, February 21, 2015. The vigil was organized by Muslim youth in solidarity with Norway’s Jewish community following anti-Jewish attacks in Denmark and other parts of Europe. (photo: Ryan Rodrick Beiler/Activestills.org)

As a member of a privileged group, I cannot tell a historically oppressed group when they should or should not feel offended or threatened. But the complexity comes when churches are responding to the call of Palestinians—a group that is not only fearful for their safety, but actually discriminated against on a daily basis.

Here is where notions of power, privilege, and liberal theology’s preferential concern for the oppressed clash: is it more important to avoid hurting Jewish feelings than it is to avoid hurting Palestinian bodies?

And that is at the core of divestment: not profiting from companies who are complicit in violations of human rights and international law. We are not just complaining about Israeli violations. We’re suggesting that churches should not profit from them.

Earlier this week I wrote for my own church publications the day before editing testimony collected by my Activestills colleague Anne Paq from victims in Gaza.

Anne interviewed Ahmed Al-Hashash, a school administrator from Rafah who lost seven members of his family. Israeli missiles killed his wife and all of his sons in the street as the family fled their home. With his own hands, Ahmed pulled shrapnel from the body of his four-year-old daughter Meena because no doctor was available to treat her wounds. 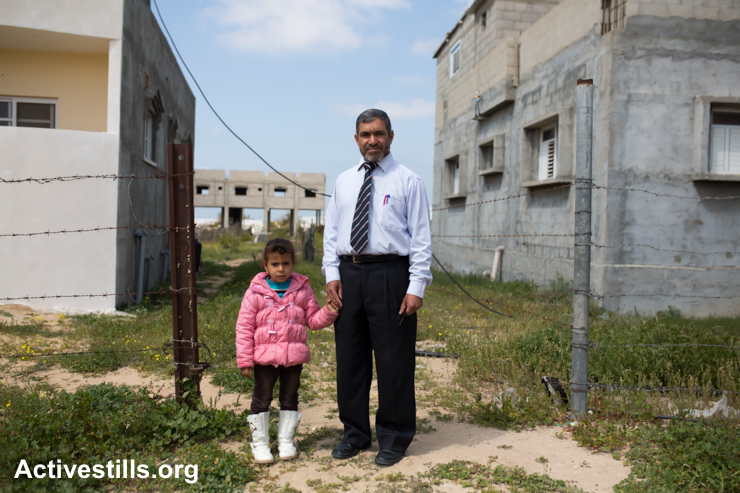 I thought about Ahmed and Meena as I recalled comments made by fellow Mennonites that divestment was too “edgy” and that boycotts could actually “harm” Palestinian workers in Israeli settlements. I thought about how the term “one-sided” loses all meaning when a single Palestinian family loses more loved ones than all the civilians killed inside Israel combined.

I’m still angry that my church did not pass its very carefully worded resolution, which did not even mention “divestment” or  “boycott” in order to be less controversial. They didn’t vote “no”—they just decided to wait two more years to vote. As a historically pacifist church, we tend to avoid conflict at all costs—even when “the least of these” are the ones who pay.

Israeli activist Sahar Vardi said it better than I could: