Amos Regev, the editor of Israel Hayom: “[An attack on Iran] would be difficult. It would be daring. But it’s possible.” 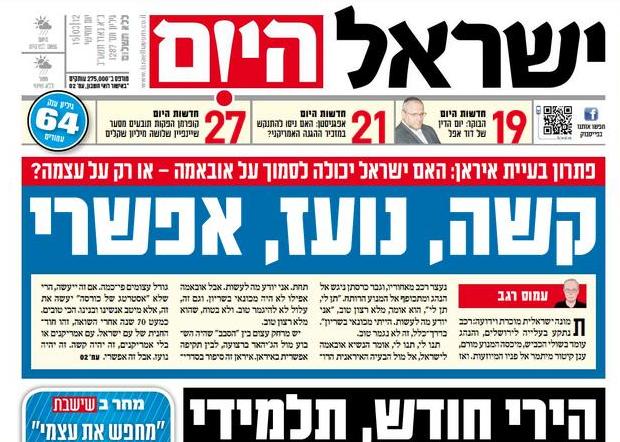 In an uncommon front-page, top-headline piece, Amos Regev, the editor of daily Israel Hayom, discusses the decision regarding an Israel military strike on Iran’s nuclear facilities. Regev, a member of Binyamin Netanyahu’s inner circle between his two terms as Prime Minister, attacks those speaking against the war, and concludes that “Yes, it’s possible to attack – and to succeed.”

Israel Hayom, launched in 2007 by international casino billionaire Sheldon Adelson, is known for its deep commitment to supporting Prime Minister Netanyahu. The paper – now the most widely read daily in Israel – is distributed for free; lately, it was revealed the paper’s senior political analyst is also employed for advising and speech writing at the Prime Minister Office.

On major issues, Israel Hayom has always reflected the personal position of Prime Minister Netanyahu. Regev’s long piece – more than 1600 words –  featured on the paper’s front page Thursday, titled: “don’t be cocky and don’t be afraid.” It opens with a critique of those expecting the United States to solve the Iranian problem for Israel.

A fair-minded observer might judge that Israel’s desire to not go gently into the darkness carries higher moral urgency than the political future of one man, even if he is president of the United States.

Regev claims that comparing the Iranian threat to the Holocaust is both historically and politically correct: “comparing the Nazis to Tehran? Absolutely. For one simple reason – it’s true,” writes Regev, before criticizing the American intelligence community for failing to grasp the threat, as they missed Al Qaeda’s threats before 9/11. “Beside, the US Army is not winning so much lately,” says Regev, referring to the war in Afghanistan.

The bottom line comes towards the end (my translation):

It would be very convenient for all of us if the Iranian crisis just disappears with the wave of a magic wand. But the problem is not going anywhere and is only getting worse each day. That is why we must solve it. And we can solve it. Some people say an attack on Iran will “set the Middle East ablaze.” Others say an attack on Iran would shock the Middle East, but after an initial spike in oil prices, will not trigger a dramatic change. It would simply solve the problem, they say, just as the bombing of the Iraqi nuclear plant destroyed Iraq’s nuclear program once and for all. If it took Iran 20 years to get to where they are today in their nuclear program, who is to say that they will recover from a military strike in a year or two?

The final paragraph states again: “With or without the Americans, it [an attack on Iran] would be difficult. It would be daring. But it’s possible.”

Not only the supporters (mouthpieces?) of Netanyahu at Israel Hayom think that the time for war is near. His critics at Haaretz are alarmed: in an another unusual piece at the liberal paper’s online edition, editor Aluf Benn, writes:

Read also:
War with Iran is closer than we think