The Bedouin community of Jabal al-Baba faces expulsion from their homes. The army eviction order says nothing about where they are supposed to go. U.S. President Donald Trump’s recognition of Jerusalem as the capital of Israel generated among many Israelis and Palestinians the fear that something terrible—a kind of political earthquake that could devastate the region—might come in response. Residents of Jerusalem know this quiet fear all too well. The wary looks on the light-rail, the absurd number of police in the streets, the increased security at every bus station. A city in eternal preparation for disaster, in which the terror ignited by faraway pyromaniacs has turned its daily routine into a hell of suspicion and fear.

The truth is that while we wait uneasily for the next great catastrophe, it is already unfolding all around us, and on a daily basis. Not far from the boundaries of the “undivided” capital, Palestinian communities in Area C, which makes up 60 percent of the West Bank, are threatened with eviction and demolition—part of Israel’s policy of demographic engineering in the area to preserve its “Jewish and democratic” character.

Entire communities, from Susya in the South Hebron Hills to Khan al-Amer near Ma’ale Adumim, are threatened with expulsion. The fact that the transfer of a native population in occupied territory is a war crime has not stopped Israel from pursuing a policy of ethnic cleansing in the area. War crimes don’t phase us anymore. When the Israeli army isn’t actively expelling Palestinian communities, it stands on the sidelines and gives settlers carte blanche to abuse and terrorize Palestinians shepherds.

The hope, perhaps, is that the Palestinians will eventually grow frustrated and acquiesce to leaving the territory voluntarily. Israel does not want Palestinians in Area C; it does not hesitate to use whatever means necessary to make that clear to them.

Now, it is the Bedouin community of Jaba al-Baba’s turn. Like many other communities belonging to the Jahalin tribe, they were also uprooted from the area of Tel Arad, an area of the Negev close to the West Bank. They then leased land from Palestinian landowners in the area where the settlement of Maale Adumim is currently located—private Palestinian land that belongs to the nearby villages and was seized by the settlement.

The community of Jaba al-Baba is located in a part of the West Bank called E1, between Maale Adumim and Jerusalem. Planned Israeli development in the area is intended to link the settlement to the capital city. For several years, this plan has been a red line for the American government, which blocked it on the grounds that, if realized, the E1 development would bisect the West Bank, separating Palestinian East Jerusalem from the rest of the West Bank and therefore eliminating the possibility of a geographically contiguous Palestinian state with East Jerusalem as its capital. E1 has been called “the last nail in the coffin of the two-state solution.” With a new occupant in the White House, the plan is likely to move forward.

In the 1990s, Israel moved two other Bedouin communities from the area to a different area adjacent to the Abu Dis garbage dump. Israel, put bluntly, is taking the Bedouin and throwing them in the trash. The residents of Jabal al-Baba now face a similar fate: after a series of demolished buildings and confiscated supplies, on November 16, the community received a military order to evacuate their homes within eight days, as the first step in the demolition of the village. They were not told where to go.

The order, called a “demarcation order,” was signed by the commander of IDF forces in the West Bank, General Roni Noma. This kind of order was first articulated in 2003, originally to apply to illegal Jewish outposts. Recently, the army has begun to use the order to expel entire Palestinian communities. The “demarcation order” allows for a quicker expulsion because it is more widely applicable and demands less bureaucratic and legal work; it does not require that each structure in a community be checked individually. A month ago, on October 16, the army demolished three caravans that housed four families, leaving homeless 27 people, including 18 children.

The road to Jabal al-Baba goes through Al-Azariya, northeast of Jerusalem. As we approach the community, the urban space decreases in size until we arrive at an unruly hill, on top of which the residents’ tents and tin shacks are scattered. As we wait for our host, Atallah Mazarrah, we witness an almost surreal scene: three men climbing up a tree on the top of the hill and decorating it in colorful Christmas lights. This Bedouin community celebrates Christmas? It turns out that this part of the hill, marked out by a fence, was given as a gift to the Pope by the King of Jordan. Hence its name: Jabal al-Baba, “Pope Mountain.” The trees in the fenced-off area are protected under Vatican auspices; the people outside of it are left vulnerable to Israeli caprice.

The community is comprised of 57 families, or around 300 people, half of whom are children. All are threatened with expulsion and demolition—individually and collectively. “The day after Trump’s speech,” Attallah tells me, “people from the army’s civil administration showed up. They went into every tent and every house, checked, and counted the people. It also seemed like they checked to see if we’re building something new, putting up a new tent or something. They didn’t speak with us, didn’t say anything.” Attallah has five children, the oldest of whom is 14. His house is set to be demolished. Of course.

“Half of the people here are children. They walk to school in Al-Azariyah, two kilometers on a difficult road. In the winter, it’s hard for many children to walk there so they stay at home. We wanted to make them a school here, but we were denied permission. Eventually, we made a kindergarten for the young children. They [the army] came and demolished it on the first day of school, in front of the children’s eyes.” The army confiscated the caravan intended for use as the kindergarten, as well as what was inside: 10 desks, 30 chairs, two storage closets, and a blackboard, all worth tens of thousands of shekels. They left the general’s order, instructing the community to evacuate within a week, on the ground where the kindergarten once stood.

“They didn’t tell us where we’re supposed to go,” Atallah says, “but judging from the experience of other communities we know that they’ll just put us on land owned by other Palestinians. They will destroy our entire way of life and also get us in all sorts of trouble with the landowners.” I ask if the Palestinian Authority has a role to play. “The PA is only good for television,” he replies. “The European Union is better, but Israel confiscated and destroyed what the EU built here too.” 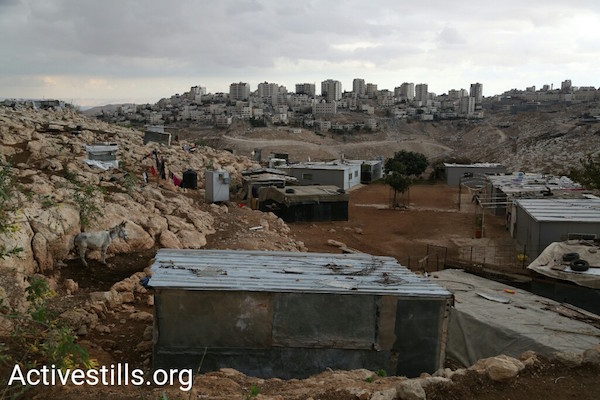 Rain clouds above Jabal al Baba. In the background, the Palestinian city of Al-Azarya (Keren Manor/Activestills)

In the early afternoon, the men are out with their flocks and the women are less than thrilled to speak with strangers. We stop to talk with Odeh, Attallah’s brother, and his wife Fatimah, next to the cabin that is their home. The parents of 10 children, they also watched their home be demolished two years ago. “We were born here, married here, and had children here. Where do they want us to go?” Fatimah asks. “When they destroyed our home, it was very hard for the children. We managed to take a few small things from the house. They’re always afraid that the soldiers will return.” What did you do after your house was destroyed? “We put up a tent next to someone else’s home. We’re all like family here, helping each other out until we can build a new house,” Odeh says. “They demolish more homes in winter because they know it will be harder to rebuild.”

“I used to work for the Jews a lot,” Odeh continues. “In the supermarket, in construction, in Jerusalem, in Tel Aviv, in Maale Adumim. But now it’s hard, they don’t give many permits. Most of us are shepherds. We just want to live. We have permission from the landowners to live here.”

As night falls, we return to the Christmas tree. The decorating has finished, and the tree is dressed in colorful lights. “When we light it at night, you can see it from the road,” Attallah says proudly. “Maybe we need to write some kind of message on it, some sentence to the world. We have no power against Israel, but the world has power.”

What would you want to write on it? I ask. Attallah thinks for a few moments and replies. “End the occupation. End it. Enough.”