In the absence of a UN deal and with the collapse of Israel’s mass deportation plan, African asylum seekers again face an uncertain future. 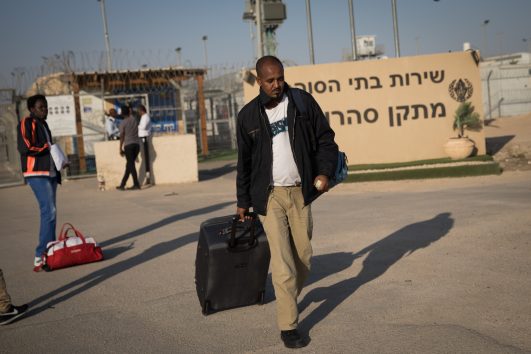 African asylum seekers who had been detained in Saharonim prison for refusing to be reported leave after the High Court ruled there was no legal justification to keep them in detention. April 15, 2018. (Hadas Parush/FLASH90)

The roughly 38,000 asylum seekers living in Israel, most of whom fled Eritrea and Sudan, again face an uncertain future. The Israeli government’s mass deportation plan collapsed last week after the government failed to broker a deal with a “third country” that would resettle refugees deported against their will. Earlier in April, Prime Minister Netanyahu announced a deal with the UN to resolve the refugee issue, only to scrap it less than 24 hours later.

The Israeli government now appears to be pursuing several new options simultaneously. Justice Minister Ayelet Shaked embarked last week on a trip to East Africa, which included stops in Ethiopia, Tanzania, and Kenya. Some asylum seeker advocates suspect that Israel is attempting to negotiate a deal with Kenya to accept refugees deported against their will.

Prime Minister Benjamin Netanyahu and Interior Minister Aryeh Deri announced last Tuesday that the government would re-open Holot – a desert, open-air detention facility for asylum seekers – following the collapse of the mass deportation plan. To do so, the government will need to pass a new law that reauthorizes the detention of the asylum seekers in the Holot facility, attorney Elad Cahana, of Tel Aviv University’s Refugee Rights Clinic, said by phone on Sunday. The governing coalition opted last December not to renew the law that kept Holot open, setting the stage for the mass deportation plan.

Prime Minister Netanyahu and other members of the governing coalition are also advancing legislation to strip Israel’s High Court of Justice of the ability to strike down laws as unconstitutional. Netanyahu and Shaked were expected to meet with Supreme Court President Esther Hayut on Sunday to discuss the various “court override” proposals. Last December, Shaked and Education Minister Naftali Bennett unveiled a bill that would allow the Knesset to override High Court decisions with a simple majority, bar the High Court from overturning laws on procedural grounds, and increase the threshold required for the Court to strike down a law.

If passed, a court override bill could have dramatic consequences. “It [would be] basically the end of constitutional protection of basic rights in Israel,” Alon Harel, professor of law at Hebrew University, told +972 Magazine earlier in April. “Having a parliamentary system without a judiciary is basically a dictatorship of the executive branch.”

Human rights advocates also warn that a court override bill would put the rights of the country’s Arab population and other minority groups at risk and set Israel up for a constitutional crisis.

With the ability to override the High Court, the Knesset could, in theory, pass a new law to allow for the mass deportation of the Eritrean and Sudanese refugees. Finance Minister Moshe Kahlon reportedly said that while he is opposed to a broader court override bill, he is in favor of a bill that would “solve the problem of the infiltrators,” using the derogatory label Israeli politicians have given to the African asylum seekers.

The High Court and successive right-wing governing coalitions have been engaged in a back-and-forth over the legality of the Holot facility and various attempts to deport the African refugees for several years. The High Court would order Holot closed, then the government would alter the criteria for detention and the amount of time detainees could be held without violating the Court’s rulings. A court override bill would end this back-and forth in the government’s favor, potentially freeing it from the Court’s previous rulings – giving the government carte blanche to deal with the refugees. 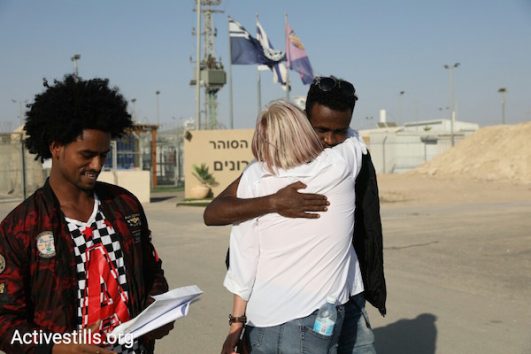 The Israeli government’s mass deportation plan began to fray in March and eventually fell apart last week. The Israeli government informed the High Court last Tuesday that the plan had collapsed after it failed to broker a deal with a “third country”— first Rwanda, then Uganda — that would accept refugees deported from Israel by force.

Earlier in April, Prime Minister Netanyahu announced a deal with the UN, only to cancel it hours later due to pressure from the Israeli Right. Under the UN deal, the UNHCR would have resettled 16,250 African asylum seekers in Western countries; Israel would have granted legal status to a portion of the asylum seekers that remained.

Massive anti-deportation rallies across Israel and around the world, investigative work by activists and journalists (including work by +972), international pressure on the Rwandan government, and strategic lawsuits challenging the details of the government’s plan all played a role in preventing the mass deportations from happening.

For the time being, asylum seekers and human rights advocates are watching Israel’s next moves with caution. Asked what’s next in the struggle for the rights of the refugees, Elad Cahana replied, “We need to see what the government decides to do.”

In the absence of the mass deportation plan — under which asylum seekers were given a choice between deportation and indefinite imprisonment — Israeli policy has roughly reverted back to what it was prior to the announcement of the plan last December. African asylum seekers must renew their visas every two months, businesses that employ them can be fined, and the government seizes 20 percent of their paychecks — which it returns to them only if and when they leave Israel.