When it comes to prosecuting its own soldiers, it seems the military investigation system is set up to allow the IDF to dodge accountability.

As we do every year, we recently published a data sheet about law enforcement regarding IDF soldiers suspected of harming Palestinians. This year, one critical piece of date point is absent: the IDF did not know how many complaints were lodged against its soldiers in 2014.

How did this come about? Well, let’s begin with the fact that a Palestinian who wishes to lodge a complaint about being harmed by soldiers cannot simply walk into an MPCID base and do so – for the simply reason that there are no MPCID bases in the West Bank. To lodge a complaint, a Palestinian must choose one of several paths, all of them twisted.

He can try to reach an Israeli police station in the West Bank, but in order to do so he would need a. an escort, as in some cases the station is within a settlement; b. hope there will be an Arab-speaking investigator on duty on the day he arrives, because there isn’t one as a matter of course; c. hope his complaint won’t get lost, and we have seen many complaints go missing on this journey.

Alternately, he can send the complaint through a human rights organization, which will pass it on directly to the military prosecution.

That’s not a filing system. That’s a system for losing files. 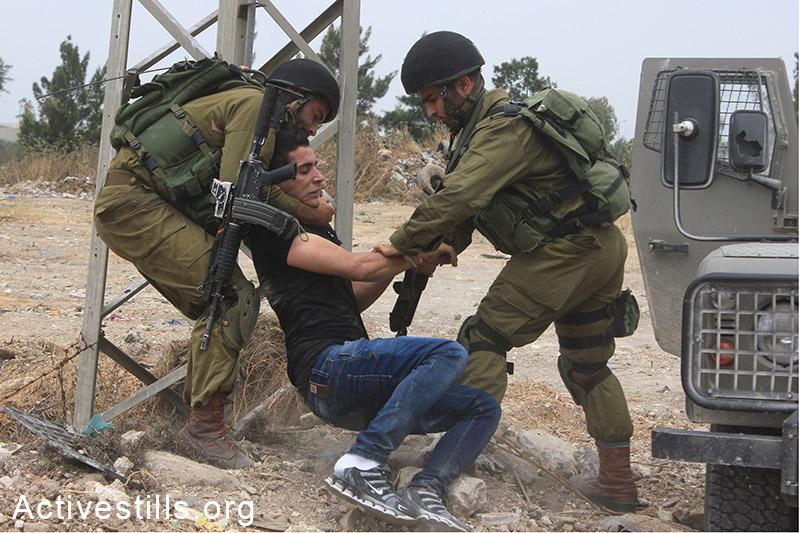 Israeli soldiers arrest a Palestinian man during the ‘March of Retun,’ held at the separation wall near Tulkarem, West Bank, May 31, 2014. (photo: Activestills.org)

Confused? Now put yourself in the shoes of a Palestinian who merely wants the soldier who hurt him to be investigated and punished. Now we can understand why the IDF does not have a clear idea of how many complaints were lodged against soldiers for harming Palestinians. The army can tell us it opened 229 investigations in 2014, but the military prosecution has no idea how many complaints or complainants reached it, because it does not differentiate between various kinds of information. It can receive “reports” from military units or from itself, which may refer to more than one event. Nor does it know how long any specific investigation lasts.

And that’s not the only problem — we’re only just beginning. Officially, the prosecution is supposed to oversee MPCID’s investigations. In practice, time after time it turns out it doesn’t have a clue. You ask about a specific investigation, and the prosecution simply has no way of knowing its status. In practice, to quote our data sheet, “the division between the two bodies creates a situation in which the IDF does not currently have one body which runs and centralizes the treatment of complaints, follows the advancement of the investigation and checking processes, measures the length of investigations and has a systematic view intended for heightening the effectiveness of investigations and their fulfilling.”

The Turkel Commission, which published its report in February 2013, noticed that IDF investigation procedures are not tight enough and demanded tighter controls and fixed time tables for investigations and prosecution decisions on cases. It realized that the element of time is critical: if an effective investigation does not take place within a short while, evidence will disappear and human memory will fade on its own, even without malicious tampering.

The Ciechanover Commission, which was supposed to rule on how to implement the Turkel Commission’s recommendations, recommended a period of 14 weeks maximum for the decision whether to open an investigation, nine months for the investigation itself, and nine more months for deciding what to do with the case. So far, the IDF has not implemented those conclusions, despite the fact that nearly three years have passed since the Turkel Commission Report was published. Feels like a standard MPCID investigation.

The time element is crucial for one additional reason: the Military Justice Law says one cannot try a soldier after six months since his discharge, or a year since the discharge in severe cases. This means that just like the examination of the case, its investigation, the re-examination of the investigation and the repeated re-numbering of the file are dragged out across many months, only increase the chances that even if the investigation does succeed, the prosecution would find it problematic to indict the felon, meaning the case will be transferred to a civilian authority.

The result of all this is a system that is not geared toward promoting accountability among soldiers; rather, it is a system geared to tell them everything will be fine, just count on us.