The death last week of Bil’in resident Jawaher Abu Rhamah, after she inhaled tear gas at a demonstration, has received a great deal of publicity, making her into a symbol of the violent means the Israeli army uses to maintain its control over the West Bank. Many commentators are parsing the incident as if it were an isolated one, but the truth is that violence and brutality are the norm. And while there is plenty of documentation to support that statement, most Israelis would prefer not to know.

A few months ago, at a Friday demonstration in Nabi Saleh, a border police officer threw a percussion grenade on my foot. I was standing on the main road of the village, taking photos of some Palestinian women who were pleading with soldiers to release a young man, when he removed a metal cylinder from the webbing on his chest, pulled a pin out of it and tossed it at me. He was grinning a little bit.

The cylinder exploded almost immediately, with a huge, Hollywood war-movie-style bang that made my ears ring and left me mostly deaf for an hour or so, as though I’d stood near an amplifier at a heavy metal concert. I had never seen a percussion grenade, so did not know that it only sounds like a real grenade; otherwise it just emitted metallic-smelling smoke that left gray powder on my leg and singe marks on my jeans, but did not cause any injury.

My voice sounded wild, fearful and hoarse, even through my ringing ears, as I screamed at the indifferent soldier. “What the fuck did you do? Are you crazy?! Are you fucking crazy?!” He just turned away and shoved his way through the crowd, disappearing into the chaos that was a Friday afternoon demonstration in Nabi Saleh. An Israeli photojournalist standing nearby shrugged his shoulders, smiled sympathetically and said, “I tried to warn you, but there wasn’t enough time.” The interesting thing, which only hit me much later, was that it never occurred to either of us that I should make a complaint against that border police officer. Because we all know that they function in a culture of near-total impunity. 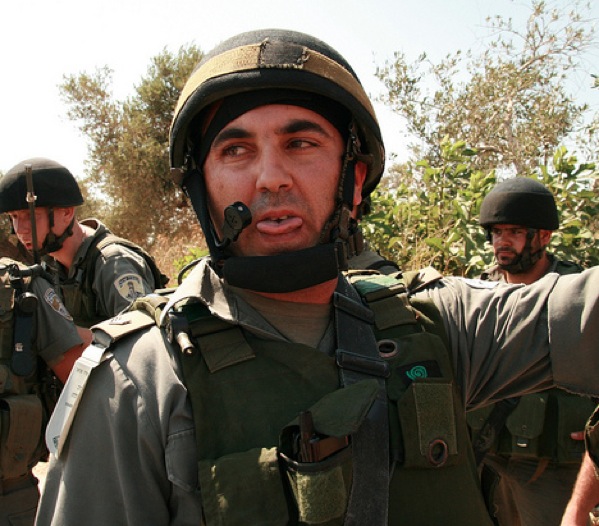 In the annals of brutality meted out by soldiers upon civilians in the West Bank, that incident was so minor that I was embarrassed to discuss it with the hardcore activists.  A few meters away, soldiers were aiming tear gas directly at unarmed demonstrators, rather than shooting in arcs in order to avoid causing injury, as one is supposed to do. Earlier that day, I had seen two old women stumble out of their home, retching and coughing up mucus from the tear gas that had seeped through the cracks around their windows and doors. Sometimes, tear gas canister break windows. 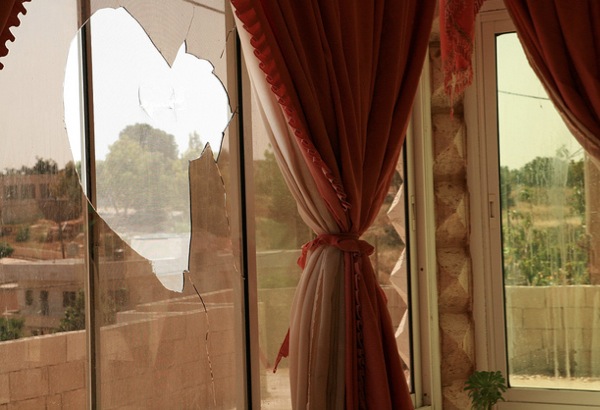 On other occasions, I had seen soldiers grab and arrest people who were just standing and observing a demonstration. I’d seen them shove people to the ground, twist their arms painfully behind their backs and hold their faces down on the burning asphalt, so hot from the summer sun that it seared through thin-soled shoes. I’d witnessed Palestinians and Israelis beaten and dragged while their hands were already bound in plastic handcuffs; and I’d seen 12 year-old kids grabbed and hustled off to jail.

In practice there are no rules or accountability in the Wild West Bank. Soldiers can do pretty much whatever they want, and there are plenty of video clips and testimony online to prove that. Once in awhile a particularly shocking video clip makes its way to television, eliciting condemnations and mutterings of bad apples. But, as Breaking the Silence documents in Occupation Testimonies (the oral testimonies of dozens of soldiers who served in the West Bank, collected over a 10-year period), it’s the occupation that’s rotten. Give heavily armed, poorly-disciplined soldiers with little-to-no accountability control over a population that is defined as an enemy, and which has no civil rights, and you will have soldiers who commit evil acts.

To my great sorrow, it is impossible to discuss these issues with most of my friends. Over the past couple of years, as I have spent more and more time in the West Bank, I have found myself feeling increasingly  isolated from my oldest friends, because they do not want to hear, or they do not believe me, or they think ‘the Arabs’ deserve what happens to them. Compassion is rare – partly, I think because the ‘other’ is behind a wall and mostly invisible. It has become difficult, for me, to just “be” in Tel Aviv, filtering out what is happening a short distance away. That is why I rarely write, anymore, about art galleries, restaurants and fashion. I don’t seem to have the heart for it.

At Bil’in on 31 December, the soldiers blanketed the village in massive clouds of tear gas. This happened, as Noam Sheizaf writes, while the demonstrators – who were armed only with flags and signs – were not even close to the fence. As Haaretz reports, the army has recently begun using a grenade launcher that allows them to shoot six canisters at once, creating a thick cloud of tear gas. The same article notes that the army’s own medical corps concluded in a 2004 study that a high concentration of gas can cause serious or lethal damage.

I was standing about 50 meters behind Jawaher Abu Rahmah’s house, which is about 200 meters from the fence. It was there, according to several eyewitnesses, that she was standing when she collapsed, and this is how my face looked when the wind blew a tear gas cloud in my direction. 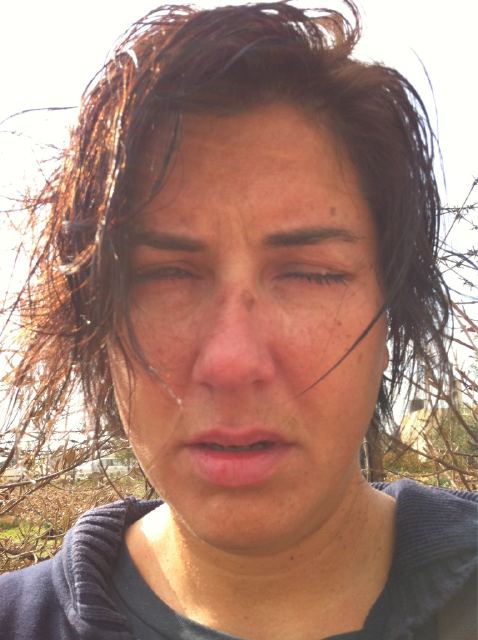 People around me responded in different ways to the gas. Some just crouched down and waited for the effects to pass; others leaned forward and retched, spitting up mucus and screwing their eyes tightly shut as the tears streamed down; still others complained of nausea and went to sit down.

This is a photo showing Mati Milstein, a photojournalist from Tel Aviv, caught in one of those tear gas clouds. As you can see, the concentration is very high. 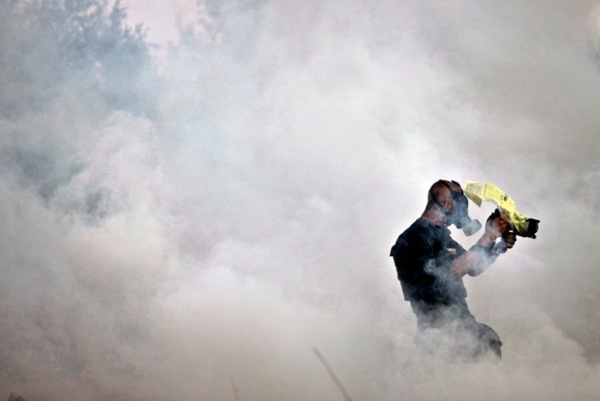 After the demonstration was over, I sat outside a village grocery store with a few other Israelis, eating cookies, drinking water and feeling very tired. Earlier that day we had slithered down steep, rocky hills for 30 minutes in order to circumvent army roadblocks on the way into the village, so we needed a ride back to where our car was parked. One of the activists, a grizzled older man named Israel, asked a Palestinian man, in Arabic with a heavy Hebrew accent, “Whose taxi van is that across the street?” And the Palestinian man, who had been sitting on a chair outside the grocery store watching us, answered in Hebrew, with a heavy Arabic accent, “It’s my taxi. Where do you want to go?”

So we piled in and directed him to a place that we all knew. Reached by badly paved side roads, which meandered through the villages, that place is just a couple minutes’ walk from a flight of concrete stairs that leads to the “Israeli” side of the barrier; I write “Israeli,” in quotation marks, because it is still inside the occupied West Bank, but it is on the side of the barrier that the Israeli authorities have decided belongs to them. There is no checkpoint and there are no soldiers there. And there are many spots like that; the barrier is, in fact, completely porous. It demonstrably does not keep Palestinians out of Israel. It is absurd to say that its purpose is to provide security for Israelis, when anyone can just walk through it – as long as one has the time and the money. The barrier just makes it much more difficult, time consuming and expensive to travel around the West Bank and from the West Bank into Israel. But try telling that to a friend who justifies the barrier on security grounds. Just try.

As we approached our destination, Yisrael asked the driver, “How much do we owe you?”

The driver answered, “Walla, it doesn’t matter. Whatever you like.”

“How about 60 shekels?” responded Inon, another Israeli in the group.

And so we paid him and descended from the taxi and walked along the road a few minutes as one of those banally beautiful Levantine sunsets threw the hills into a purple silhouette backlit by deep orange. We climbed a short flight of stairs to a parking lot on the “Israeli” side, and from there we drove back to Tel Aviv, leaving the Palestinians behind to fight what is, in the end, their own battle.

Someone asked me why I go to those demonstrations. After thinking about it for a minute, I said, “I guess I go to bear witness.”