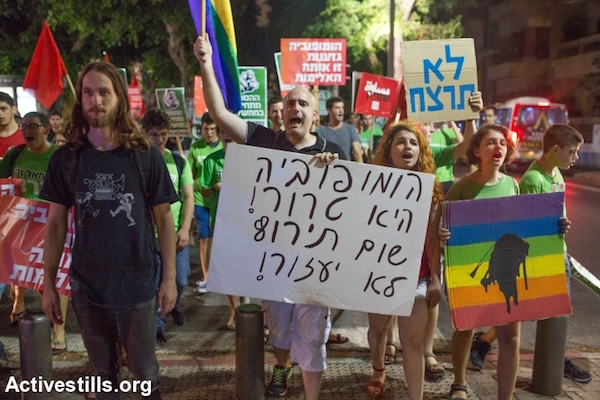 Israeli left-wing activists protest against recent Jewish violent attacks on the Dawabsha family and LGTBQ activists, Tel Aviv, August, 8, 2015. The protesters are holding signs saying “Homophobia is terror,” “Do not murder” and “Homophobia and racism are the same violence.” (Yotam Ronen/Activestills.org)

The state of LGBT rights in Israel can effectively be summed up in a series of events surrounding the Knesset’s first ever LGBT rights day. As much of an achievement as that was — although with caveats — the day was overshadowed by a number of proposed bills to advance LGBT rights that were shot down before before even getting off the ground.

A day earlier, a major gay rights advocacy organization released its latest set of figures on homophobia in Israel. The report showed an 80 percent increase in the number of documented anti-LGBT statements and incidents in 2015, compared with the previous year.

A second report published by a coalition of feminist organizations found that around two-thirds of LGBT women have suffered sexual harassment, a third have been subjected to physical violence and 81 percent felt compelled to hide their identity in some way or another. A report released earlier last year showed that half of Israel’s transgender population has been physically assaulted at least once.

These statistics are backed up by research undertaken by the Berl Katznelson Foundation last December, which found that the LGBT community was second only to Palestinians as the targets of online incitement in 2015. A social media monitoring service found 6,836 homophobic statements posted on Hebrew-language social media in January 2016 alone.

And 2015 was, of course, the year in which an ultra-Orthodox Israeli went on a stabbing spree at the Jerusalem pride parade — for the second time — killing one and wounding five.

To have the Knesset’s first gay rights day in this atmosphere was both a landmark moment and a red herring of sorts. Brought about by the Knesset LGBT Lobby — headed by MKs Michal Rozin (Meretz), Merav Michaeli (Zionist Union) and Yael German (Yesh Atid) — it was attended by over a quarter of Knesset members, although mostly from the opposition. As Michaeli told +972 Magazine, “it’s a legitimization [of the LGBT community and its rights], even if that should no longer be this complicated.”

But the day, and those that came before and after, only served to highlight the gap between perception and reality of LGBT rights in Israel, as Michaeli herself recognizes. “This is a Knesset in which we cannot get any legislation passed that has to do with equal rights for LGBT people,” the Labor MK explained. 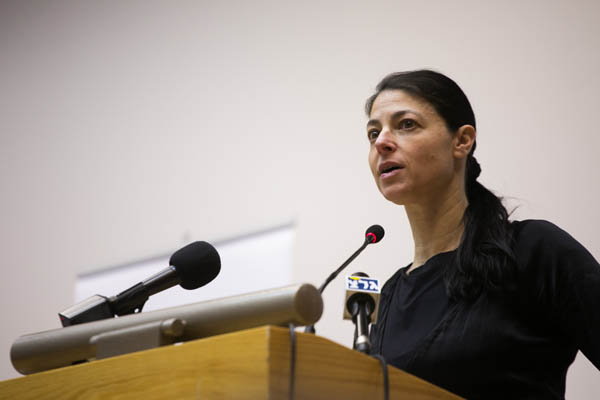 Asked what she feels the biggest obstacle is to advancing gay rights in the country, Michaeli is unequivocal: “The automatic surrender to very conservative and very dark ultra-Orthodox conditions. The same thing happens with all kinds of rights that clash with state and religion issues — it’s like a force of nature, no one tries to challenge it. There’s no attempt by the coalition to negotiate.”

Personal and family status laws in Israel are governed by the rabbinate, meaning that there is no civil marriage, no interfaith marriage and no same-sex marriage, primarily due to ultra-Orthodox Judaism’s deeply conservative and often homophobic attitudes.

Furthermore, says Khader Abu Seif, a gay Palestinian activist, the lack of Palestinian representation at the Knesset LGBT rights event undermined its status as a measure of true progress.

“It can’t be a real pride day if there’s no Arab representative,” he told +972. “It is a big step, but it feels as if it’s only for one section of the LGBT community in Israel.”

This reflects what Abu Seif feels is a broader problem at the cross-section between the LGBT and Palestinian struggles for rights. “There is no money going toward Palestinian LGBTs in Israel, and no representation in the government,” he said.

Asked about the lack of Palestinian presence at the Knesset’s gay rights day, Michaeli said that efforts to include Palestinian partners had been made but that, “for various reasons, in the end it wasn’t possible to bring them on board for this specific day.”

As for the surge in homophobia, Michaeli sees it as an indicator that progress is being made. “It’s a backlash,” she explained. “There’s always a backlash whenever there’s real advancement and more rights are being gained. When people are more able to be out in the open, the backlash will be stronger.”

“Of course, when the gay community could not walk the streets freely there were fewer incidents of homophobia,” she continued. “It’s the same with women’s rights, with every kind of tangible change that goes against very deep patriarchal tradition.”

While this is indeed true, and despite Prime Minister Benjamin Netanyahu’s pretty words on Tuesday, openly homophobic views are tolerated among Israel’s political echelon. In addition, almost nothing is done to stop the very real and very dangerous public incitement against the LGBT community here.

And, as with most advances that happen in Israel-Palestine, they happen for Jews first — with Palestinians coming last, or not at all. There are people in the Knesset working hard and with great willingness to improve the situation for LGBT individuals in this land, but ultimately they are working within the confines of an institution that inherently privileges the rights of one ethnic group over another. That undermines the very foundations of any minority struggle, and as American civil rights activist Fannie Lou Hamer said, “nobody’s free until everybody’s free.”