Abbas tells UN General Assembly that the PA cannot continue to be bound by previous agreements with Israel; calls for a multilateral approach to peacekeeping. 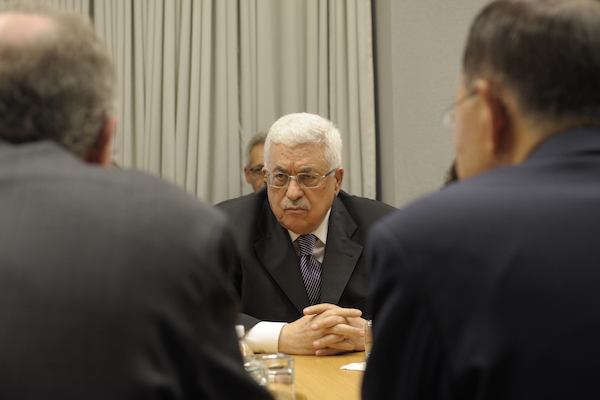 The Palestinian Authority cannot continue to be bound by previous agreements with Israel, Palestinian President Mahmoud Abbas told the UN General Assembly during his speech Wednesday, throwing the PA’s obligation to the Oslo Accords into question.

Accusing Israel of violating the Oslo Accords, Abbas declared that Israel, which Abbas called an “apartheid state,” would have to assume “all of its responsibilities as an occupying power,” after destroying the foundations of both political and security arrangements.

“It is no longer useful to waste time in negotiations for the sake of negotiations; what is required is to mobilize international efforts to oversee an end to the occupation in line with the resolutions of international legitimacy,” the Palestinian president said.

While full of passionate declarations about “settlement colonization” and the “racist annexation wall,” Abbas mentioned the word Gaza only four times throughout his entire speech, a far cry from his speech at the 2014 General Assembly, when he accused Israel of carrying out a “war of genocide” against the Strip during last summer’s Operation Protective Edge.

Prime Minister Netanyahu responded to Wednesday’s speech, calling it “deceitful” and encouraging of “incitement and lawlessness in the Middle East.” Meanwhile, Israeli opposition leader Isaac Herzog, who takes nearly every chance he has to outflank Netanyahu from the right, decried Abbas’ apartheid comparison, saying it only “serves the extremists among both peoples.”

While it is yet unclear whether Abbas will make good on his threats to drive a stake through security coordination arrangements or go forth with multilateralism, one must wonder: are we witnessing the end of the Oslo period?