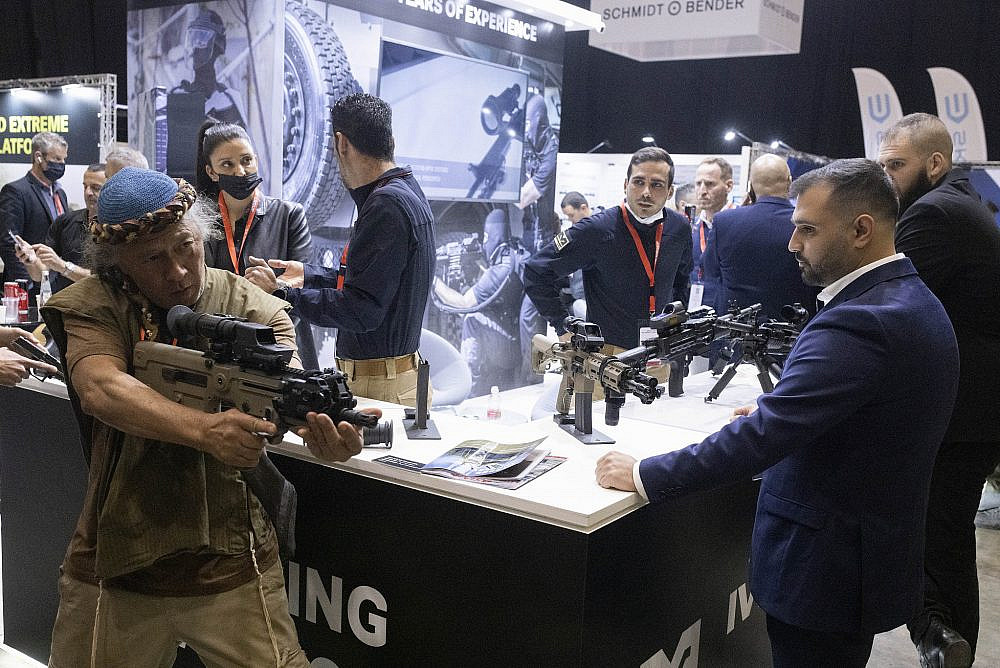 ISDEF, the largest defense and homeland security trade show in the country, takes place every other year at Expo Tel Aviv. The most recent edition, hosted between March 21 and 23, drew 12,000 visitors from 90 countries around the world; most of them were representatives of private technology firms, police agencies, and militaries.

This year, as part of a trend that began in 2016 and was accelerated by the COVID-19 pandemic, scores of smaller surveillance start-ups overshadowed the big names in Israeli arms exports. Many of these private companies advertised Artificial Intelligence (AI)-powered surveillance technologies — tested and refined in the occupied Palestinian territories as generic “security solutions” for a world in crisis.

Since replacing Benjamin Netanyahu as prime minister last June, Naftali Bennett has been pushing a new mantra called “shrinking the conflict.” The term, coined by Israeli philosopher Micah Goodman, calls on leaders across the Israeli political spectrum to give up both on trying to fully end Israel’s military occupation and on seeking to maintain the so-called status quo.

Instead, says Goodman, the political establishment should engage in various “realistic” steps — like easing restrictions on Palestinian movement and reallocating land in the West Bank for Palestinian economic development — to minimize the effects of Israel’s military rule on Palestinians in order to reduce violence and tensions. 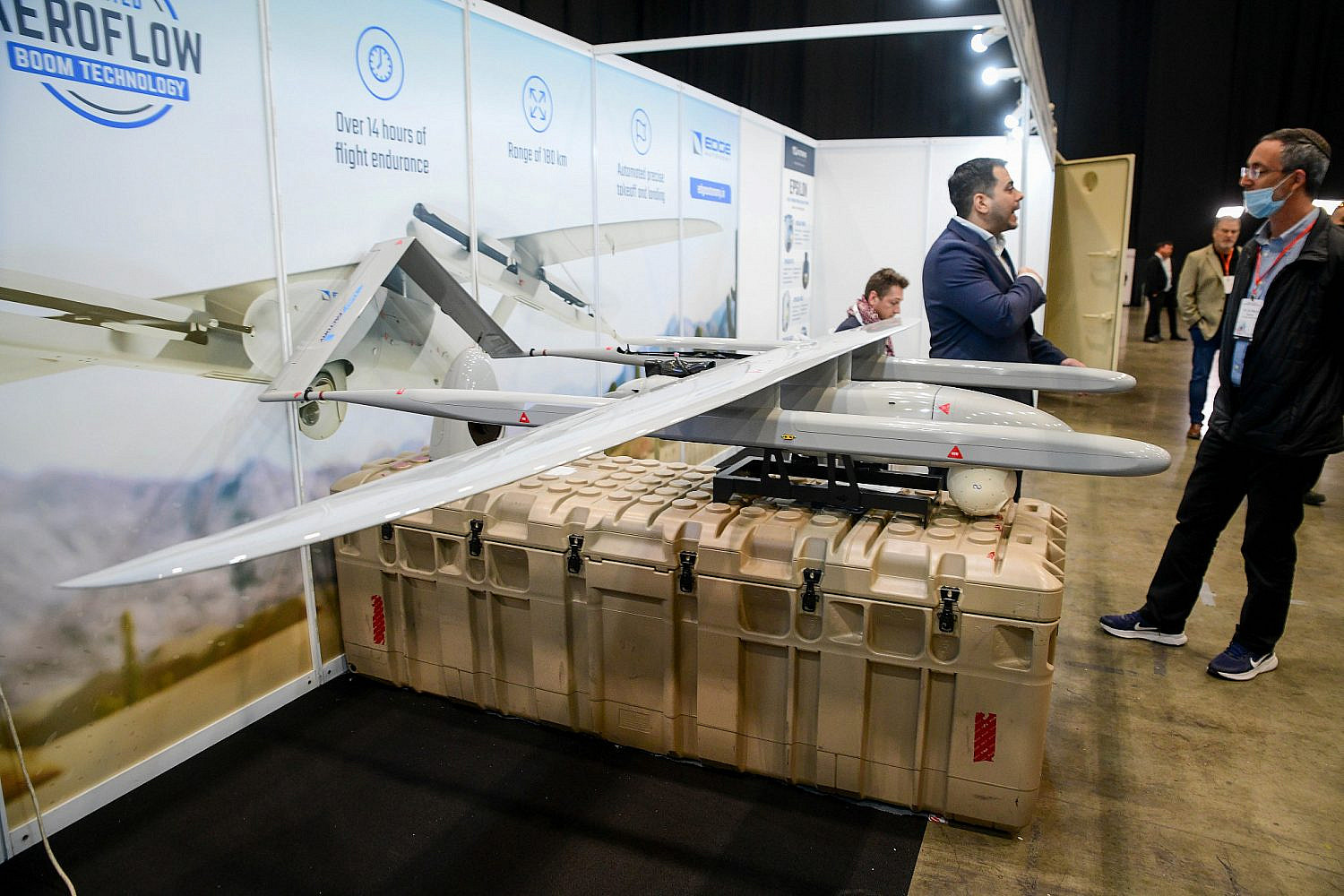 In recent years, innovations in surveillance technology have become key to this strategy. Facial recognition cameras at checkpoints, biometric databases, and unmanned aerial vehicles (UAVs) over urban space automate many components of Israel’s military rule. As the occupation stretches into its 55th year, the Israeli army argues that such technologies make its intractable military regime easier to manage.

The technologies developed in Palestine, however, are rapidly shaping surveillance trends around the world. And at ISDEF, Israeli firms marketed their military-grade surveillance tech as COVID-19 containment methods, smart-policing initiatives, and frictionless border control solutions worldwide.

‘This isn’t science fiction. We have these tools today’

Israel’s surveillance industry ballooned in the years following 9/11 when the country rebranded itself as an innovative “Start-Up Nation.” It was the dawn of the digital era, and surveillance infrastructure expanded across the region and worldwide. For the Israeli army, the crisis of the Second Intifada and the proliferation of digital communications demanded a dramatic restructuring of military intelligence. In “Migdalor,” the interior magazine of Unit 8200 (Israel’s equivalent of the NSA), which was circulated among intelligence soldiers in the early 2000s, generals praised the corporate structures of tech conglomerates like Google, saying that top-secret intelligence units should function as a “collection of mini start-ups.”

Units like 8200, which were previously devoted to largely passive signal intelligence (i.e. tapping into phone lines), became public-facing innovation labs. Army-trained engineers, developers, and analysts spent three to five years developing, managing, and deploying facial recognition cameras, drones, spyware, and biometric databases in the occupied territories. Once discharged, they were eager to put their skills to use in the country’s nascent tech sectors; recently minted veterans easily framed the labor of military surveillance as “product management,” “data analysis,” or “dev-ops.” 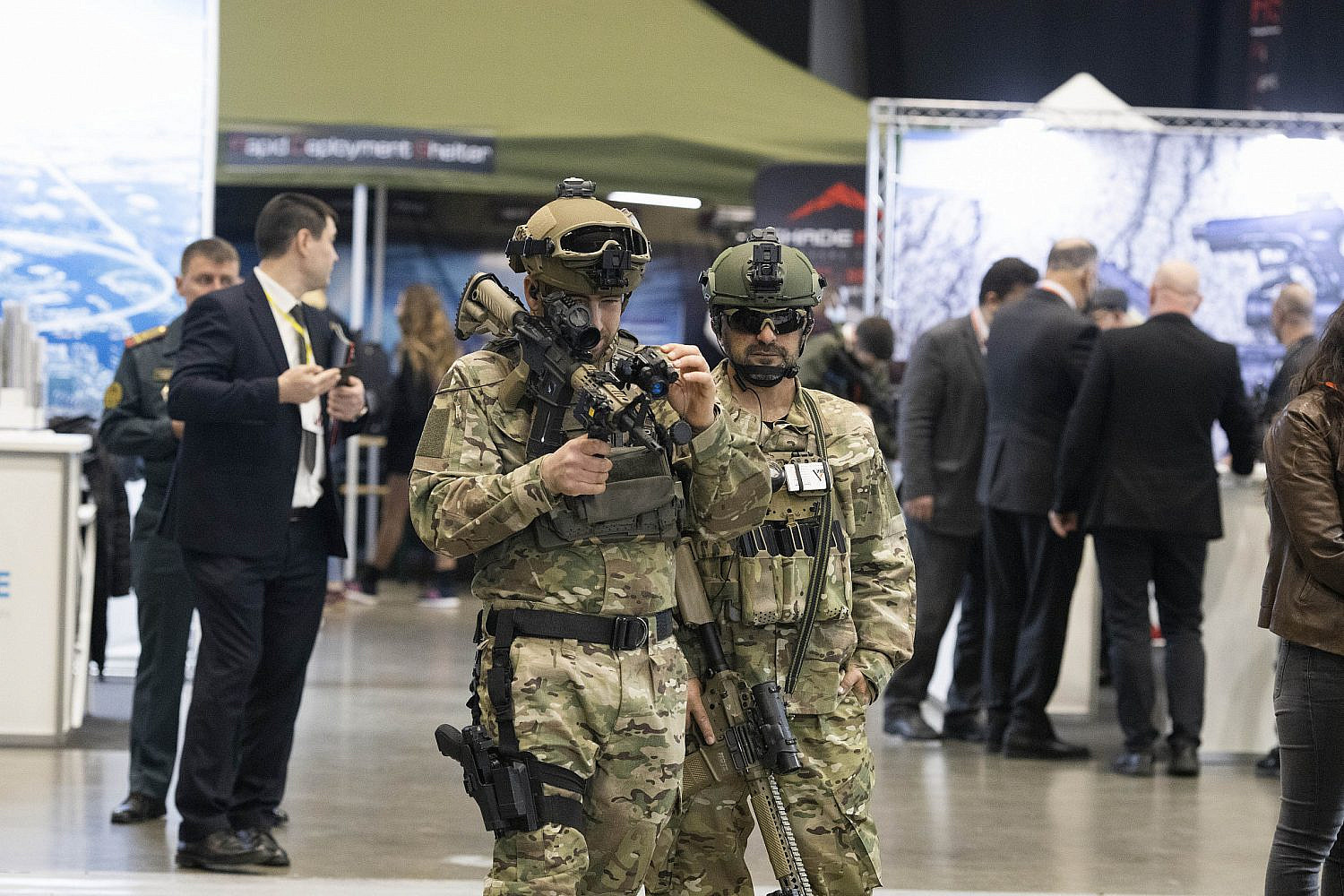 As Israel’s tech boom propelled the country into a period of unparalleled economic growth in the first two decades of the 21st century, Israeli politicians across the spectrum welcomed a new era of occupation. Innovations in artificial intelligence and image processing now allow many components of military rule to be carried out at a convenient distance, promising to reduce contact between Israeli soldiers and Palestinians, and therefore minimize harm to both sides.

“Why cause any risk to soldiers when most of the battlefield can be managed by robots?” said Yair Golan, former army chief of staff and now a Knesset member for the liberal Meretz party, in a speech at ISDEF 2019. “This isn’t science fiction. We have these tools today.”

These technologies also found a second life in growing global surveillance markets. As a permanent end to Israel’s military occupation receded further and further from view, politicians loudly touted Israel as an innovative start-up nation, which the anthropologist Rebecca Stein described as a deliberate marketing campaign by the Israeli government. Broadcast across state-run social media accounts, Stein says images of Israel as a tech hub sought to distract from the more sinister uses of many of these technologies.

Recent news revealing the extent of Israel’s surveillance system in the West Bank, however, has reframed the proliferation of surveillance technology in less promising terms, emphasizing the repressive and dehumanizing effects of the new tech. In November, the Washington Post detailed the Israeli military’s invasive use of facial recognition surveillance tech in the West Bank: since 2020, the army has built up a biometric database called “Blue Wolf” to profile and track Palestinians’ movement through expanding facial and iris scanners and CCTV surveillance.

According to the Post’s reporting, Palestinian children and the elderly are photographed without their consent, sometimes pulled out of bed in the dead of night by soldiers. Last month, Haaretz revealed that Israeli soldiers are required to add 50 people to the Blue Wolf database during each shift, leading to the targeting of Palestinian civilians regardless of whether they are connected to security concerns. Soldiers have even photographed foreign activists for the system. 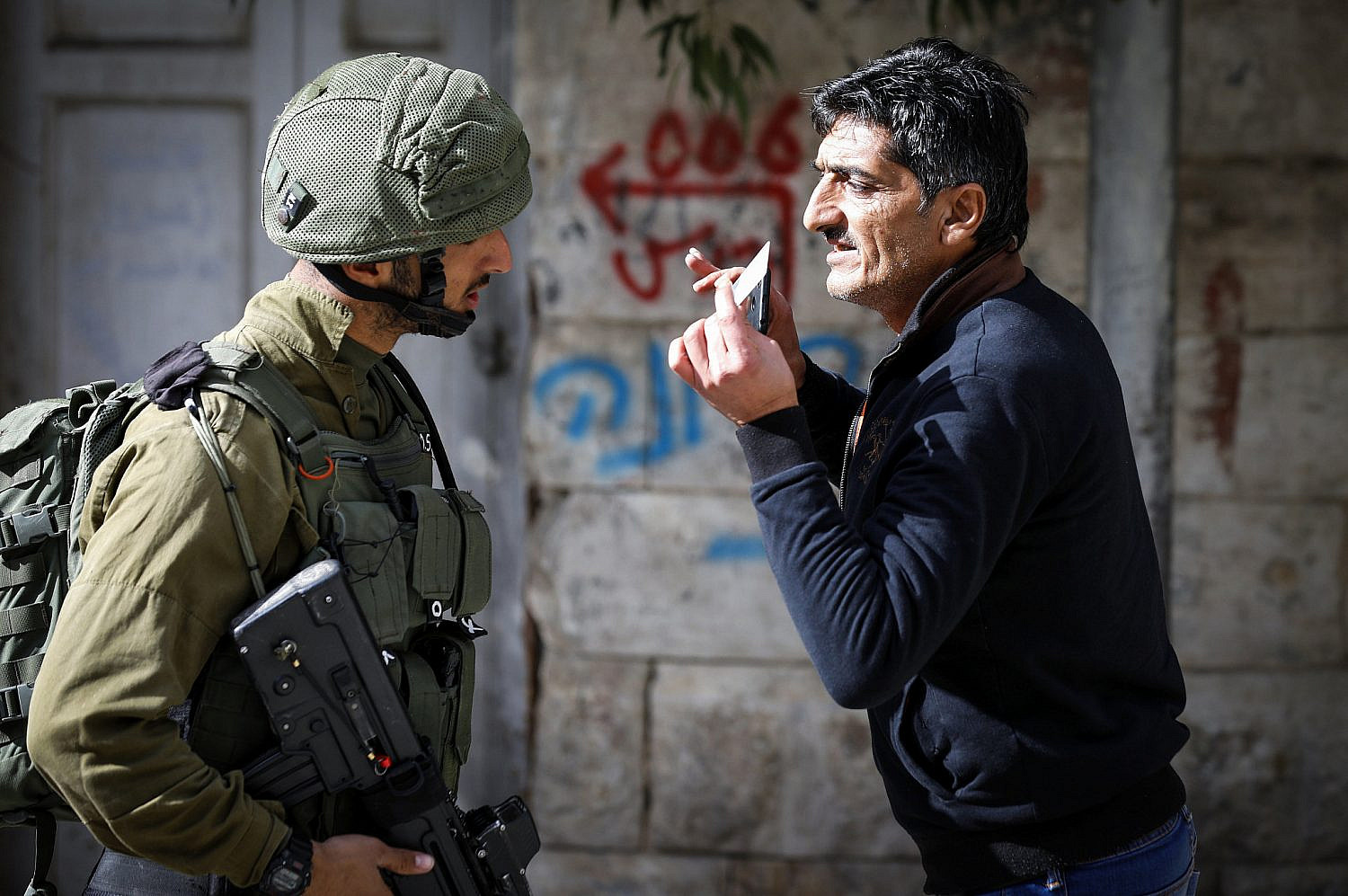 Israeli soldiers speaks with a Palestinian man the Old City of Hebron in the West Bank, Jan. 14, 2018. (Wisam Hashlamoun/Flash90)

The massive scale of Israeli surveillance in Palestine has provoked concern for many privacy advocates. Researchers allege recent practices violate international human rights law by exposing a civilian population to invasive surveillance with no recourse to privacy safeguards and protections. Palestinian digital rights advocate Mona Shtaya describes the systemic denial of privacy in Palestine as “disastrous.” “People start living in fear,” she explained in an interview on Al-Shabaka’s podcast last winter. “They start feeling afraid for their life.”

ISDEF 2022 made clear that Israel’s largely unregulated surveillance apparatus in the occupied territories is helping to drive the expansion of surveillance worldwide. Many of these technologies are sanitized of their carceral effects at Expo Tel Aviv, instead being promoted as convenient and humane security solutions: facial recognition scanners, fingerprint readers, and location monitoring allow speedy access to personal information, quick entry through borders, and large-scale public health measures.

The risks posed by many of these technologies are well documented in Palestine and other parts of the world. Experts warn that mass surveillance stifles freedom of speech, movement, and protest. Facial recognition technology is proven to heighten discrimination when used by authorities against certain demographic groups, particularly communities of color. What’s more, cyberespionage tools, like the NSO Group’s Pegasus spyware, have been used by governments worldwide to intimidate and censor journalists, political dissidents, and human rights defenders. 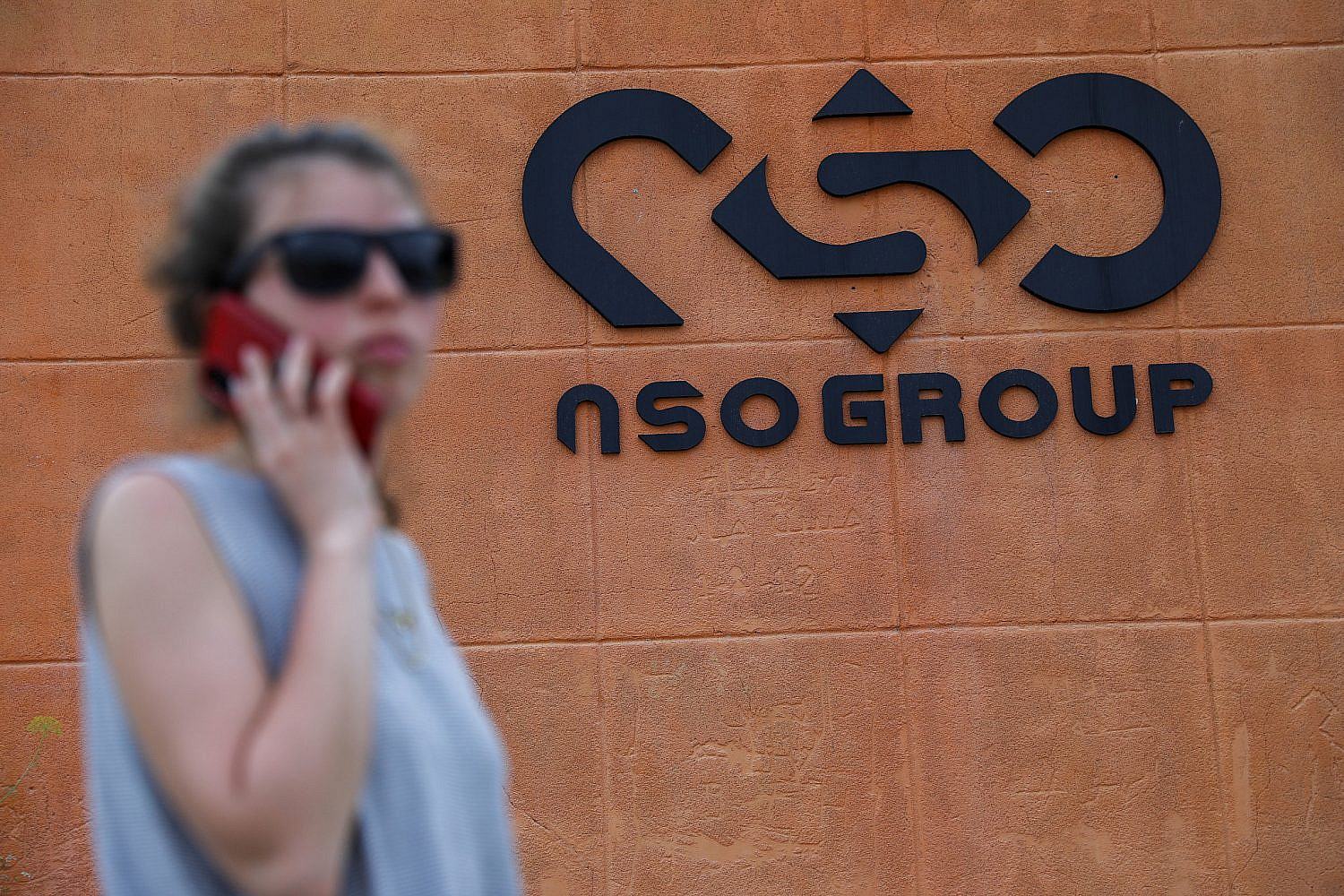 A woman standing with her phone next to the NSO Group company logo, outside the NSO Group offices in Sapir, southern Israel, April 2, 2022. (Noam Revkin Fenton/Flash90)

To date, regulations on the use and abuse of such tools have not kept up with the pace of technological innovation. For this reason, calls for moratoriums or outright bans on surveillance technologies at municipal, federal, and international levels are gaining traction.

Nonetheless, it is unlikely that Israel would adhere to new international regulations on the use of surveillance technologies. In the last weeks, 11 Israeli citizens — Jewish and Arab-Palestinian — were killed in violent attacks carried out by Palestinians, some of whom had expressed allegiance to the Islamic State. Israeli analysts across the political spectrum have argued that intensive security measures will be necessary to prevent the deaths of more civilians. Surveillance will likely increase in the wake of what top-level officials described as a security failure by Israel’s intelligence community, with broad support across Jewish-Israeli society.

As this trend grows, balancing fundamental civil and political rights with the necessity of ensuring everyone’s security becomes more critical than ever. With politicians’ claims of “shrinking the conflict” ensuring no end to the insecurity and violence of Israel’s occupation, it is the corporate CEOs and start-up executives using ISDEF to cash in on the booming private surveillance market who will be the biggest victors of this new era.

Sophia Goodfriend is a Ph.D. candidate in Anthropology at Duke University with expertise in digital rights and digital surveillance in Israel/Palestine. She joined 7amleh, the Arab Center for Social Media Advancement, as a researcher in the Summer of 2021 to investigate the impact of digital surveillance among Palestinian Jerusalemites. Twitter: @sopgood.