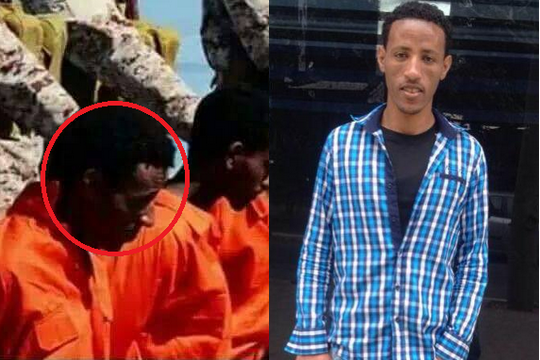 T. appearing in ISIS’ execution video (L), and photographed in Tel Aviv (R) (photo courtesy of the Hotline for Refugees and Migrants)

At least three Eritrean asylum seekers who lived in Israel and were deported to a third country were executed by Islamic State militants in Libya this past week, according to family and friends who recognized them in a video released by the extremist Sunni group. The Hotline for Refugees and Migrants is checking the possibility that additional Eritreans deported by Israel were also executed.

“I recognized my relative, T., from the photos published by ISIS that appeared on Facebook before the video was released,” says Mesi Fashiya, an Israeli-born Eritrean whose parents came to Israel in the 70s. “I thought it was him, but then ISIS announced that it was a group of Ethiopians, so I began to look into it. The people at the Holot detention center also saw the photos — they hoped it was only photos, and that they didn’t really kill them. After they released the video there was no doubt. I couldn’t watch, but my friends in Holot did and couldn’t sleep all night.”

T. a distant relative of Fashiya, came to Israel through Egypt in 2007. He lived with her for a period of time, and the two became close. According to her, T.’s mental state deteriorated after being sent to Holot, and despite her promises to try and do everything to release him, he eventually decided to sign a voluntary departure form and was deported to a third country — Rwanda or Uganda. T.’s brother, who lives in Norway, told Fashiya that T. attempted to reach Europe. He crossed Sudan and reached Libya, where he got on a boat to Europe that was turned back. The last thing they heard was that he was in a Libyan prison.

The video shows two groups of hostages being executed by Islamic State militants in Libya. One group is beheaded near a beach, while another is killed by gunmen. According to Fashiya, who works at the Hotline for Refugees and Migrants, both she and the prisoners at Holot identified two more asylum seekers in the group that was shot. “They are doing twisted things there, beheading them and then placing the heads on the bodies. It is terrible. It is difficult to believe that these things happen, even to people you don’t know. But when it happens to someone you do know, a relative who was promised a better life when he leaves, and this is what happens in the end — it’s unbelievable.

Fashiya says that since the executions, many in the Eritrean community in Israel have changed their Facebook profile photos to black as a sign of mourning. The community is worried about the possible ties between the Libyan authorities and ISIS, and worry that if ties do exist, this won’t be the last catastrophe of its kind, as many Eritreans who try to reach Europe do so through Libya. 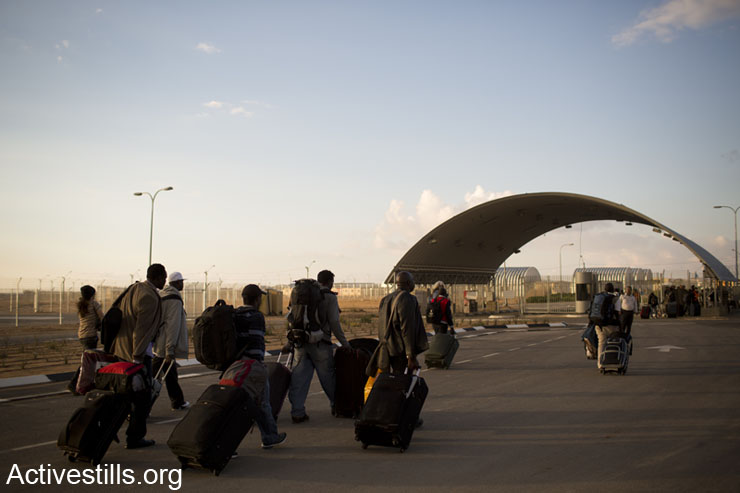 It is important to note that the three victims signed “voluntary departure” forms, although most asylum seekers and NGOs see this as another form of deportation, since the other option afforded to asylum seekers is indefinite detention at Holot in the middle of the Negev Desert.

The Israeli government recently announced its intention to begin forcefully deporting Eritrean and Sudanese asylum seekers. Refugee organizations are concerned that the state refuses to reveal its back channel deals with “third countries,” and worry that those same countries will not guarantee the safety of asylum seekers.

Perhaps now, after these horrendous murders, someone in the government will re-examine this policy. However, if Transportation Minister Yisrael Katz’s comments on the hundreds of migrants who drowned on their way to Europe are any marker, it seems that the answer is negative.