The approval of the ‘Prawer Plan’ concerning Bedouins in the Negev desert demonstrates that Israel’s principle of divide and rule, which has been perfected in the West Bank and Gaza, also applies to citizens of Israel living inside 1948 boundaries. 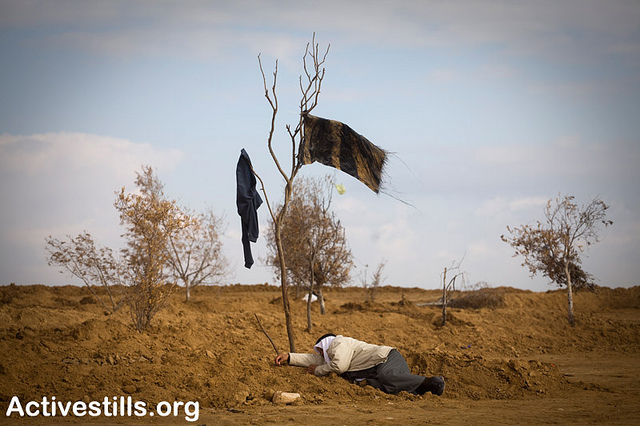 Bedouin resident in the village of Al Arakib after it was destroyed by Israeli forces (Photo: Activestills)

Perhaps the most violent component of Israel’s control over non-Jewish inhabitants since the founding of the state has been the (unequal) distribution and allocation of resources. In Area C of the West Bank, the area designated for full Israeli military and civilian control by the Oslo accords which makes up the majority of land in the occupied territories, Israel has demonstrated its ability to control the Palestinians of the West Bank through the allocation of resources such as water, electricity and building permits. In the West Bank village of Susya, for example, Palestinians are forced to purchase water at rates close to 10 times higher than an Israeli living in Tel Aviv. Their wells are destroyed by Israel’s civilian administration due to lack of permits which are almost impossible to obtain and many living structures are deemed illegally built and subject to demolition.

The deprivation of resources leaves Palestinians helpless in the face of bureaucratic measures which even Kafka could not have imagined. The point of this system is clear, make Palestinian life in area C villages so unbearable that they their only option is to move into cities in Area A, under Palestinian Authority control. The unclaimed land is then expropriated by Israel using out of date Ottoman laws. This amounts to an effective use of the classic colonial practice of divide and rule given the fragmented nature of Area A cities in the West Bank and the settlements which form almost natural barrier between them.

Interestingly, this is not just happening to West Bank Palestinians. Something similar is taking place to non-Jewish citizens inside Israeli territory. This morning, Israel authorized the controversial “Prawer Plan” concerning the resettlement of Bedouins in the Negev Desert.

Authored by Ehud Prawer, head of the Policy Planning Department at the Prime Minister’s Office, the report contradicts an earlier report on how to resolve settlement issues in the Negev desert. The first report, penned by former Justice Eliezer Goldberg, demanded that Israel make every attempt to respect Bedouins living in the Negev, noting in particular the need to allow them to remain in their villages and homes.

The Prawer report, which has been criticized by the Israeli civil liberties outfit, the  Association of Civil Rights in Israel, has proposed that as many as 30,000 Bedouins be removed from their homes and villages, against their will and for little reason. Removal has been approved by the government according to a report in today’s edition of Haaretz (Hebrew).

The decision to evacuate as many as 30,000 Bedouins and relocate them to large Bedouin towns such as Rahat, Khura and Ksayfe with some financial compensation  has been called by some a “declaration of war on the Bedouin.” It is actually a long time coming if the experience of the Bedouin village of al Arakib is any indication. The village has been destroyed almost 30 times by Israel in an effort to make way for a new Jewish National Fund forest in its place.

During the height of the hopeful J14 tent protests this summer, demands for better Bedouin rights could be heard filling conversations even in the heart of Tel Aviv’s Rothschild boulevard tent encampment. However, hope has taken a backseat in recent days as many of the tent protesters’ demands for Bedouin rights have been dropped, ignored or simply disappeared.

Israel policies of divide and rule, based on classical colonial principles, are not limited to its occupied populations. The adoption of the Prawer plan by the Israeli government has shown that Israel uses this mechanism of control to subjugate all non-Jewish inhabitants under its control from the Jordan River to the Mediterranean Sea regardless of the status of their citizenship.