German journalist Martin Lejeune was detained and interrogated for 24 hours before being deported. A journalist with political viewpoints not aligned with the regime’s is a real danger to democracy, it appears.

The good news is we can all sleep soundly tonight. A grave danger was thwarted in a timely manner. And not just temporarily, but for the next 10 years. The bad news is that the danger wasn’t related to us, but rather – and this is also doubtful – to the Israeli regime.

A full disclosure is called for: I know Martin Lejeune personally; he is a freelance reporter who during the summer of 2014, risking his own life and livelihood, reported from the Gaza Strip independently of IDF spokespersons or any corporate news agency. I met him in a Berlin café in 2014, just before his famous trip to the Gaza Strip. We have been in touch ever since. Lejeune, as someone dedicated to investigative reporting, is constantly exposed to hostility, not just in Israel, but also in Germany. He will survive; he’s a descendent of the Huguenots, and they have some experience with political persecution. However, the story is not just about Lejeune; it story touches all who, either by choice or by necessity, live between the Jordan river and the Mediterranean sea. The story is about the nature of Israel’s government – in actuality already for a very long time, but especially these days.

Here’s the short of the story: Earlier this month, at 10 p.m. on a Monday, after about 20 hours of detention and interrogation Lejeune was told that he was being denied entry to Israel because he is a security risk: “You are not a reporter, you have a political agenda.”

I will not get into the wisdom of this decision. There are indeed multitudinous mechanisms that stand between the citizen and the truth. Why resort to such a far-reaching action that will certainly cause a stir? Israel has, on multiple occasions, denied entry of public figures into territories under its unfettered control and did so mainly to enhance its reputation in the world.

So Lejeune now has the honor of joining the list of intellectuals, journalists, artists, activists and, of course, regular citizens, who were not born with the proper Jewish privilege and are not allowed entry into Israeli territory. It is not up to me to mimic dark government offices that deliberate and make decisions that are supposed to shield Israel from its enemies, both imagined and real.

Indeed, this type of regime not only requires many enemies, but also knows how to occasionally reward its loyal servants. Thus, censors, generals, police commanders, intelligence agency heads, and other self-perceived gatekeepers, sycophants and activist cheerleaders are promoted within government ranks and who defend nothing but the system itself. So why should it surprise us that all sorts of military and security sector appointments are turned into media hype in the Sparta of the Middle East?

To be sure, this is not the first time that Israel has harassed Lejeune and interfered with his investigative reporting. Of note is this exchange between him and Ron Paz, defender of Israel (against what?) in his role in the Foreign Press Department of the Government Press Office (GPO), during [Lejeune’s] application for a press card. “How do we determine if a person is a reporter or an activist?”, Paz asked himself rhetorically. “Many borderline cases enjoy the Israeli benefit of the doubt”, argued Paz as he basked in the liberal generosity of the Israeli regime in comparison to … the Hamas regime in Gaza. Indeed, the functionary has chosen to seek justification vis-à-vis the truly lofty. How long are we to be consoled by the relative advantages of the Israeli regime over that of Hamas and its ilk?

Paz continued and made clear to Lejeune that his case, as opposed to the borderline cases that the regime tends to accede to, is clear and therefore relatively simple. Lejeune, it seems, can be classified with those indisputably extreme and incorrigible cases who do not approach news in Israel with journalistic ethics, but have adopted, God save us, a critical political approach. The regime’s representative permits himself to decide all this.

Exactly what is that great danger that lies in store for Israel from a 35-year old reporter who does not subscribe to the ultimate Zionist truth? Mr. Paz did not find necessary to elaborate. Instead, he lists Lejeune’s transgressions against the enlightened political entity reigning over Zion: “regular” participation in anti-Israel demonstrations, and participation in the Gaza flotilla, “not just to ‘report,’ but with a political agenda.” Mr. Paz admits that he refrained from adding on a long list of deviations from the Zionist line apparently expected of a visiting reporter, and justifiably so. By doing so, he would have to admit that he conducted surveillance of Martin Lejeune for some two years. A celebration of democracy. All for naught; Israel has tagged Lejeune, the reporter, as a pro-Palestinian activist. Heaven forbid.

Then Mr. Paz bombards Lejeune with questions, as if the accusations would be deemed grave enough for listeners to cover their ears: have you participated in a number of pro-Palestinian demonstrations in Europe? Did you deliver an address at the University of Hamburg titled “What really happened in Gaza?” Have you presented yourself as anti-Zionist and as a reporter? Have you called on Germany to stop exporting weapons to Israel? And, of course, the question of funding that we are all so fond of here. And so on and so forth. Mr. Paz valorously sums up: “This is, in my opinion, a case in which Israeli democracy must defend itself.” Israeli democracy: it is now safe from the likes of Lejeune for 10 years. Ten years. This, just because he is not one of the regime’s fans.

Meanwhile, he was detained while awaiting deportation. And the brilliant justification for the official denial of entry: “Avoidance of illegal immigration.” Very funny. 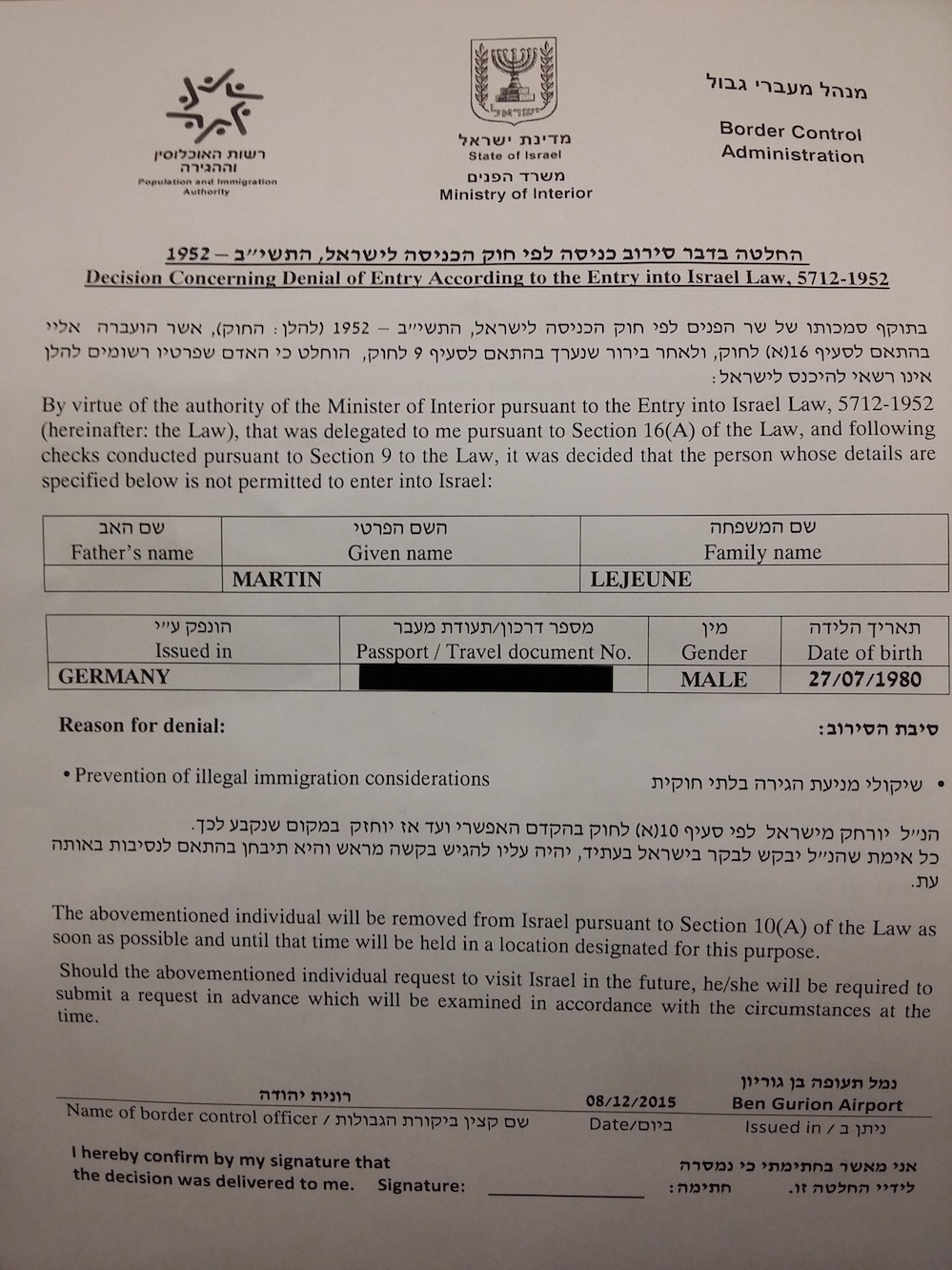 It sometimes seems that the authorities rather like these kinds of challenges. Then it will tell its citizens that they are both in the same boat. This is, of course, a big advantage for the government: most Israelis do not consider the difference between society and state. This becomes well apparent in the colloquial language that politicians and journalists like to bandy about: eternal confusion between the state, the regime, on the one side and its inhabitants, society, on the other side – “The whole nation”, etc.

And anyone who has passed through the Israel education system and is attentive to its media communications will fall into the trap – unless s/he belongs to the population sectors most egregiously discriminated against – particularly discriminated against so that the others will identify with and feel kinship and common interests with the government. It is well known that the most efficient way to dominate and repress people is by differential distribution of privilege. And this pays off for the government. Even those who go out and demonstrate against government policy are equipped with Israeli flags, the flag of the regime that represses them. It would be interesting to know if these demonstrators are thought to have a “political agenda.”

So everything happens in the first person plural – including criticism of the government. And the “last one” [Netanyahu] hears this and laughs all the way to the bank. As long as the majority believe as Louis IV, in spite of everything, that the state and he are one and the same – then the corrupt regime is secure and at ease.

It is not easy to follow the news. A specialized body is required for this: thick elephant skin, rhinoceros horn, obtuse heart and more. The question is what else must we become inured to in Israel: poverty, unemployment, public summary executions, hate demonstrations, racism, house demolitions and more.

A reporter wanted to enter Israel. So he wanted to. He has been banned entry for 10 years. Is it still possible to talk about ethics within the context of Israel? It is very doubtful. As the German jurist Carl Schmitt, who contributed his talents to the service of the Nazi regime until the latter became sick of him, once said, “This is not legitimacy, but dictatorship.” And indeed, this is dictatorial administration. Not “like”. Not “reminds of”. Not “corresponds to”. Not “amorphous.” Not “might be construed to be.” Entirely, without quotation marks. And without diversions. Without the chasm that separates the designator from the designee. In actuality, this is beyond administration. It is dictatorship.

It is not easy, therefore, to follow the news, but also it may not be so important to do so and it is mainly unsatisfying. Beyond all this, it is worthwhile that we begin to quietly and seriously ask ourselves: Who is this regime good for?

Idan Gillo is a doctoral student in German literature at Stanford University. This article was first published in Hebrew on Haokets.