Over the past three months Israel has seen a surge in European firms adjusting their business ties with the Jewish State. The knee-jerk response of its politicians is telling: the point of no return has been reached. 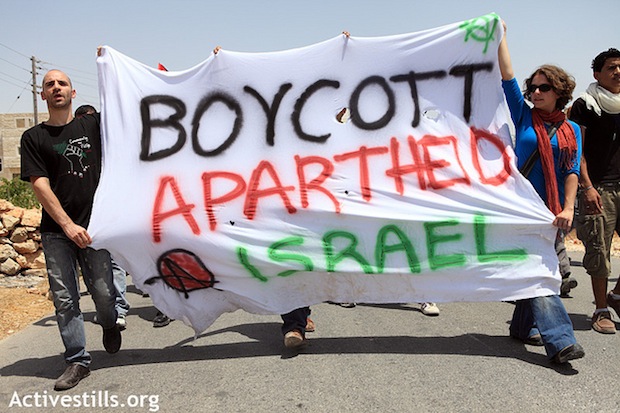 There’s been a lot of talk lately about how the BDS (boycott, divestment and sanctions) movement against Israel is gaining traction. It’s pretty much a fact no one can dispute – those three letters are seen more and more in just about every news item about the Israeli-Palestinian conflict. But there has also been some speculation about a certain “tipping point” concerning the campaign, and when exactly it will arrive.

That point has been reached over the past three months, based not only the number and weight of businesses imposing various sanctions, but also on Israeli reactions to them.

This Economist piece from February 8th has an excellent summary of some of the latest developments, mainly the decision of Denmark’s largest bank, Danske Bank, to blacklist Israel’s Bank Hapoalim due to its involvement in the funding of settlement construction; the decision of the Norwegian Ministry of Finance in January to exclude the Israeli firms Africa Israel Investments and Danya Cebus from its Government Pension Fund Global; and Dutch water company Vitens decision from December, which provides water to 5.4 million people in the Netherlands, to discontinue all joint ventures with Israel’s national water supplier Mekorot, in protest over the Israeli company’s operations in the West Bank.

The Economist also quickly mentions the Sodastream-Scarlett Johansenn affair –  which brought unprecedented scrutiny to the apartheid reality that exists in the West Bank. The Sodastream affair was one of the biggest smacks to the faces against the occupation in recent memory. I personally found my own Facebook feed full of many who were indeed aware of the occupation, but were extremely surprised to find that Israel and its businesses were using the good ol’ colonialist theme of “we’re good for the natives.”

However, Since the Economist piece was published, there have been some more developments – and more importantly, Israeli reaction showing real nervousness. Just this morning, Haaretz reported that boycott pressure has caused two foreign bidders to drop out of a tender to build facilities in the ports of Haifa and Ashdod:

Royal Boskalis Westminster, a Dutch operator of ports that had submitted a proposal under the name Holland Terminal in the prequalification stage last December, dropped out shortly thereafter. More recently, Italy’s Condote de Agua withdrew after passing the prequalification process.

The companies that had initially expressed their interest in the PQ stage last April made their decisions to drop out in recent months as boycott pressure on Israel has grown. The deadline for submitting bids was Monday.

In addition to the companies that withdrew from bidding, a third company – Jan De Nul from Belgium – only agreed to submit its bid after it was permitted to do so through a company registered in Luxembourg called Ludreco, out of fear of jeopardizing its business in the Arab world.

But what has seemed to really agitate Israeli politicians was the decision by Germany’s Deutsche Bank to “flag” Bank Hapoalim as a “morally questionable investment” on Monday. Deutsche decided to include Hapoalim on a list of companies whose conduct is ethically questionable, possibly due to its activity in the settlements.

This time, it was Prime Minister Benjamin Netanyahu who lashed out on Facebook:

That’s right, the Israeli prime minister stooped so low as to use the Holocaust for political purposes. Wouldn’t be the first time, though.

Here’s what Likud backbencher Ofir Akunis had to say:

[Translation] Let’s say someone told you a German bank was boycotting an Israeli bank due to “immoral” investments.

A German bank boycotting Jews? Could it be? These things have happened before…

In light of history, this bank better reverse its unethical decision!

And Dani Dayan, former head of the settler “Yesha Council” and today an international spokesperson for the settlement movement said on Facebook:

[Translation] A few words on ‘Deutsche Bank’ that ruled that investment in a certain Israeli bank is immoral.

In 1933 after Hitler rose to power, Deutsche Bank fired its three Jewish board members.

By November 1938 the bank was involved in stealing 363 businesses from Jews. In the bank they called it ‘Aryanisation’.

Deutsche Bank was the bank of the Gestapo and the bank that funded the construction of the Auschwitz death camp.

These were 60 seconds on Deutsche Bank and morality.

I cannot remember a time when I have seen so many Israeli public figures on both sides of the political map so obsessed with Israel’s standing in the world – most of them shivering with fear of global isolation. Palestinians living under the occupation – and Israeli activists who support their cause – should be well aware that the non-violent tactics they have taken over the past years seem to be working better than any violent uprising.

But let’s be clear: Deutsche Bank, Danske Bank and the others are not joining BDS because they care about Palestinians. They are huge financial entities with only the bottom line on their mind. They fear losing business, as any good capitalist should. With the number and sheer importance of these European firms over the past three months, and seeing as how Europe is Israel’s largest trade partner, combined with knee-jerk Israeli reactions, it is now safe to say that Israel and the occupation have become an economic liability.

Whether this is enough to end Israeli apartheid, we’ll have to wait and see. But what can be said is that 2014 will be remembered as the year BDS reached its tipping point.