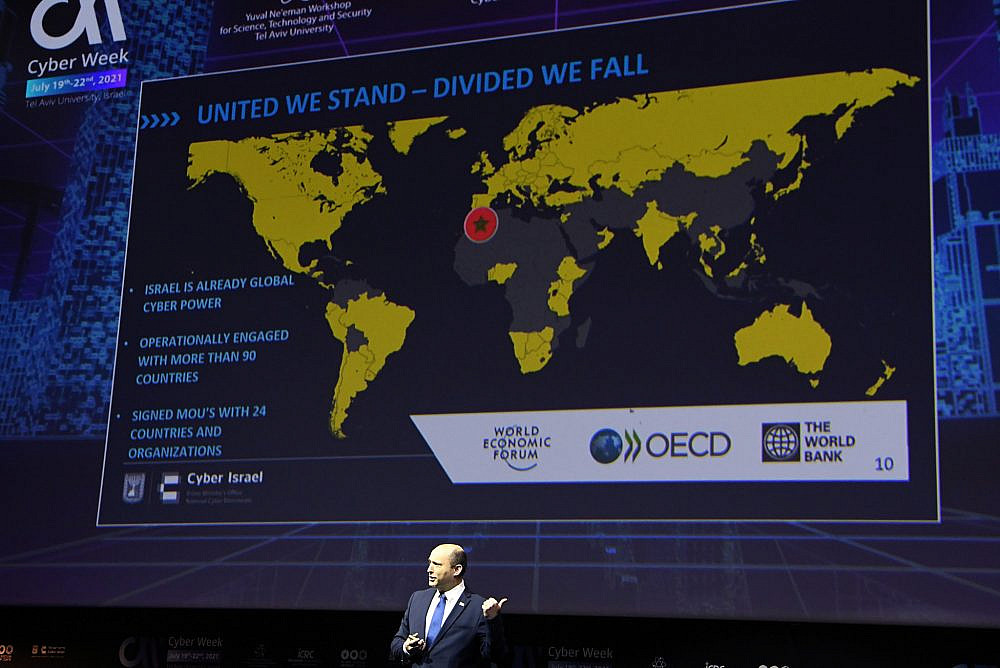 Nadav Zafrir’s old colleagues from the Israeli army’s elite intelligence unit, 8200, describe him as the ‘James Bond’ type. The ex-director of Israel’s high-tech spy unit – the equivalent of the U.S. National Security Agency (NSA) – appears like a cross between a Silicon Valley venture capitalist and a commander of special operatives. On the one hand, he wears dark sunglasses and dresses in a smattering of contemporary designer clothes that is rare for career generals in the Israeli military, known for their open collar shirts and leather sandals. On the other hand, his stint as an Israeli paratrooper means that he carries himself with the flex of someone who spent years in an elite infantry brigade.

In a speech on June 28, during Tel Aviv University’s annual Cyber Week, Zafrir described a new military landscape, one where governments outsource the tools and tactics of high-tech warfare to private firms, entrepreneurial citizens, and corporate conglomerates alike.

“You are seeing cyber offensively and defensively crowdsourced.” Zafrir said, “You’re seeing the integration of government capacity, whether it be civilian, government, military, private sector, and nation-states.”

The blurred line between the private technology sector and Israel’s military is par for the course at Cyber Week, a conference founded 11 years ago by Isaac Ben-Israel. A decorated Israeli general, mastermind of Israel’s cyber policy, current head of Israel’s Space Agency, and military philosopher, Ben-Israel once wrote a book promoting the use of post-structural theory in military intelligence operations. In the 2000s, he taught the IDF how to calculate the number of targeted assassins needed to maintain an edge over the Gaza Strip according to the entropy equations of physics.

Ben-Israel hoped Cyber Week would, like his own career, blur the line between the academy, the military, and the technology industry. But these days, Cyber Week feels like an exercise in corporate speed dating between heads of state, career generals, and venture capital (VC) fund managers. They offer visions of virtual warfare waged on behalf of militaries by private firms and their financial backers, rather than soldiers and their commanders. 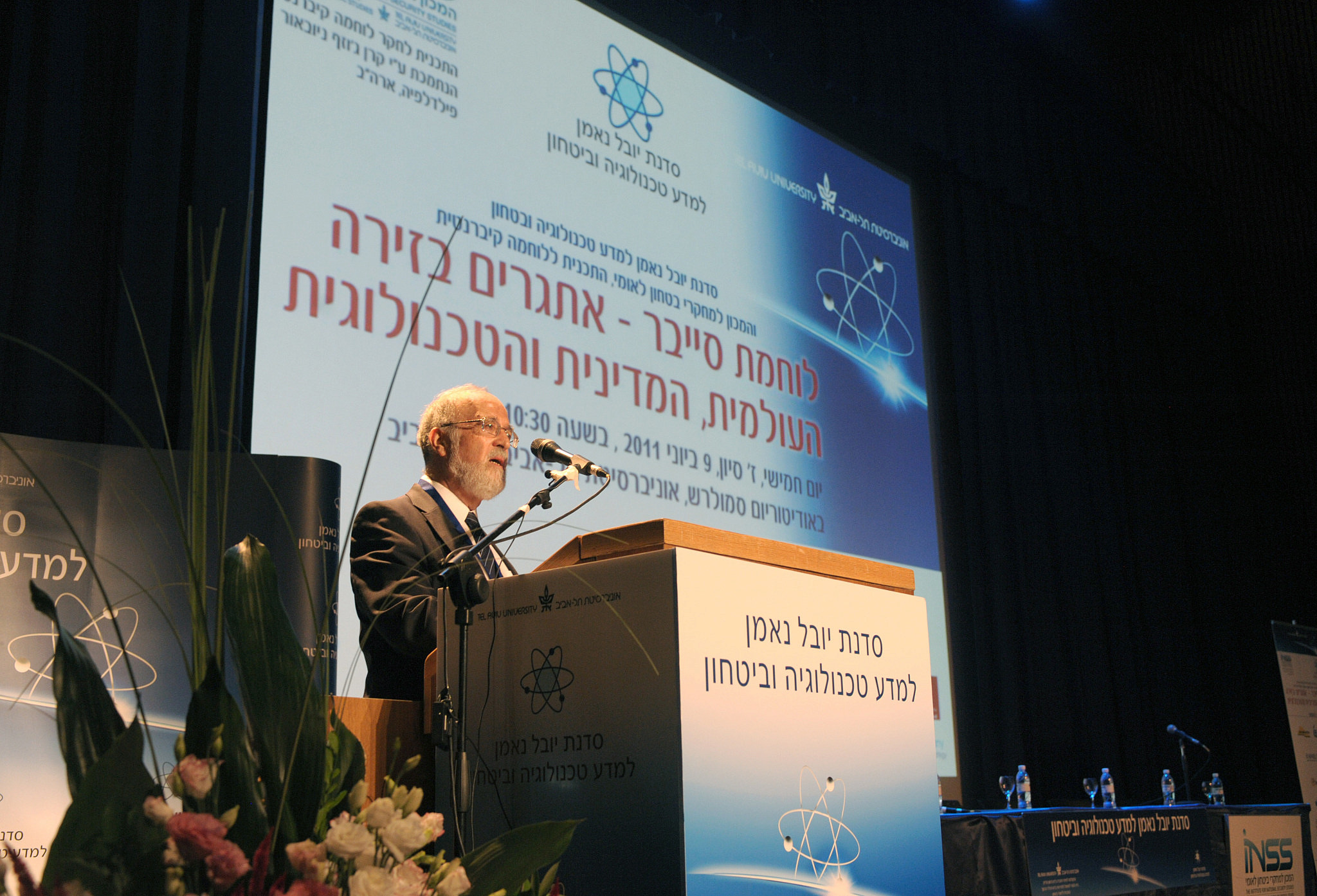 Most of the big names at this year’s Cyber Week have moved from decorated military postings to managing venture capital funds or advising startups. Zafrir, for example, spent the better part of his army career at Israel’s Military Intelligence headquarters, located beneath a mall in central Tel Aviv. Once he retired, he took a handful of talented generals with him to start a venture capital fund, called “Team 8,” bent on getting cybersecurity startups off the ground. When Zafrir launched the fund, business experts said Team 8 represented a “new military-industrial complex” where private firms operate “almost like mercenaries,” providing cutting-edge cyberweapons to companies and governments alike.

Team 8 has worked strictly in the defensive cybersecurity realm since its inception, funding firms that ward off rather than carry out attacks. But Israel’s high-tech scene demonstrates that the line between offensive and defensive cyber capabilities is fragile and often taken advantage of. Privatizing the tools and tactics of digital warfare has led to the proliferation of more sinister firms like the NSO Group, which target human rights advocates and politicians alike with invasive surveillance.

These days, even long-time technology executives are worried. “Cyberweapons belong in the hands of the military, not private businesses,” said Guy Barnhart-Magen, a cyber security CEO and a speaker at Cyber Week, during an interview this spring. “When your incentive is monetary, who is thinking about what happens when it falls into the wrong hands?”

For Barnhart-Magen, the rise and fall of NSO group — which faces bankruptcy after being blacklisted by the United States — exemplifies the risk of states relying on private firms to develop new technologies. But events like Cyber Week demonstrate that the cash flow isn’t ending soon. New firms are cropping up quickly, and alongside cyberweapons they are flaunting killer robots, lethal lasers, and Cambridge Analytica-style psyops.

Despite the hype around events like Cyber Week, there is nothing new about militaries outsourcing their operations to private tech firms. Israel is following in the footsteps of bigger military superpowers, like the United States; Silicon Valley was, after all, the creation of the U.S. Department of Defense. From the 1960s to the 1990s, the Defense Department pumped millions into computer companies, which churned out the processors that guided nuclear missiles and launched spy satellites. But the rise of global tech conglomerates and privately-funded startups in the 1990s left intelligence establishments worldwide scrambling to keep pace with civilian innovation. 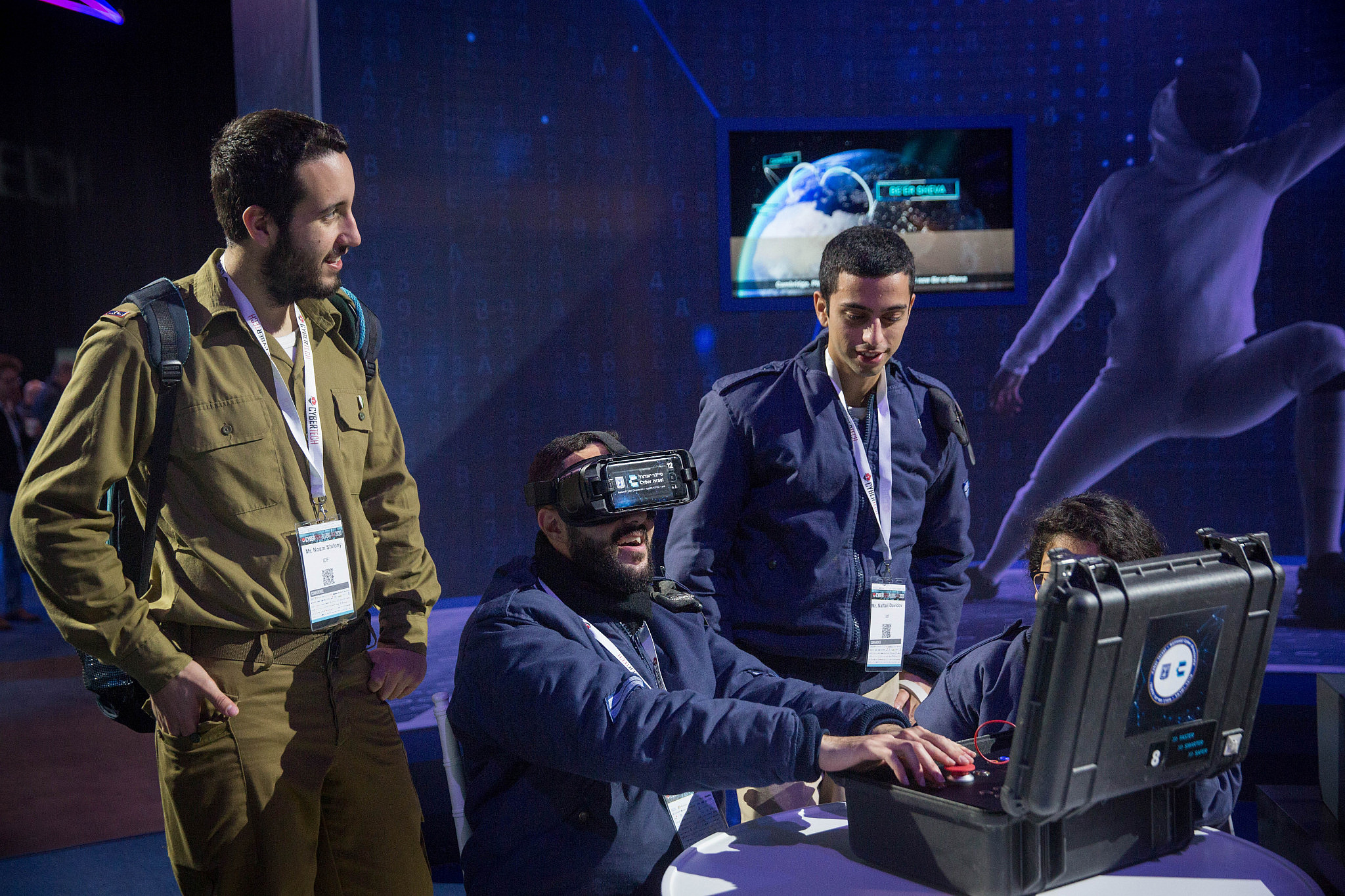 In the United States, this anxiety spawned In-Q-Tel, the very own venture capital fund of the Central Intelligence Agency (CIA). Founded in 1999, In-Q-Tel delivers cutting-edge surveillance tech from the startup world to the U.S. intelligence community. The Q in the name is a homage to James Bond’s Quartermaster, or Agent Q, who supplies Bond with fantastical and often lethal new technologies. The Hollywood reference was aspirational: then, companies like Google were churning out new technology the military hadn’t dreamed of possessing. The CIA hoped In-Q-Tel would help renovate their analog spy-arsenal to meet the demands of the digital era.

In-Q-Tel set a new model for how militaries would outsource research and development to the private industry, especially for Israel. As one career general in Unit 8200 put it during an anonymous interview this spring: “We realized we needed to make better use of the private sector — we had to start thinking about it differently.” The general, who served in the upper ranks of intelligence for three decades, recounted how military leadership realized “that soldiers didn’t necessarily have to be wearing uniforms.”

The army began contracting with small firms to carry out surveillance and produce new tech. Some, like Black Cube — which also carried out espionage for Hollywood mogul turned convicted sex-offender Harvey Weinstein — had worse reputations than others. Most, though, were staffed by veterans of elite intelligence units and had high-ranking generals sitting on their boards.

Military funds also started flowing into Israel’s startup scene at a dizzying rate as the army became another kind of capital investor. Today, several of Israel’s intelligence arms run their own VC funds modeled on the CIA’s In-Q-Tel.

Outsourcing research and development to private firms means new technologies can be prototyped and refined quickly, without the hassle of government bureaucracy. However, monitoring and regulating the private companies developing new technologies is difficult. It is especially challenging when ex-generals become CEOs, and the intelligence outfits they once led fashion themselves as private investors. 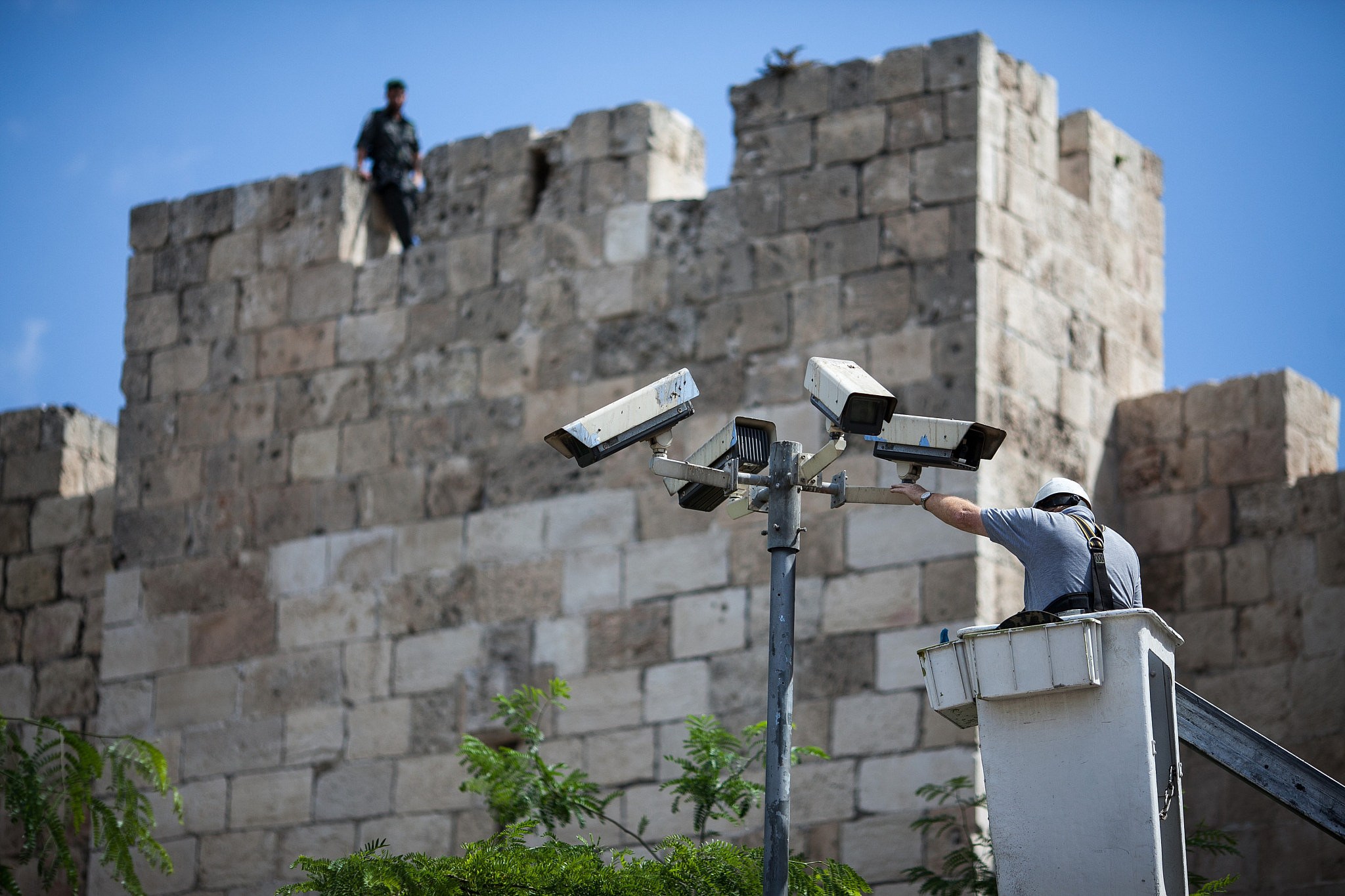 A technician fixes security cameras located near the Old City of Jerusalem, May 20 2012. (Noam Moskowitz/Flash90)

The revolving door between the national security state and the private tech sector is especially pronounced for “the Startup Nation,” where the blurred line between the military and the high-tech economy is a national brand. Even so, armies worldwide keep pumping money into a militarized technology market that advocates — from elite coalitions of scientists to Human Rights Watch — characterize as lawless. To date, there are zero overarching regulations on developing and deploying AI-powered surveillance tech and weapons.

Journalists and activists have long warned of this status quo’s brutal impact in Palestine, where Israel’s military deploys autonomous and remote-controlled weapons — from killer drones to spyware — on a civilian population living under occupation. Israeli generals promise a revolution in artificial intelligence and virtual warfare is just around the corner. Tomorrow’s war, they say, will be less bloody and more efficient. Yet many of those doing the talking also chair, advise, or invest in the very firms that pledge to revolutionize conflict, which means it is difficult to take them for their word. For now, new technologies seem to make the missiles and bullets fall at a more frequent and more deadly pace: 2022 is on track to be a record-breaking year for the number of Palestinians killed by Israeli forces in the occupied West Bank.

The human cost of warfare is hard to remember when the business of militarism is dressed up like a Silicon Valley work retreat. At Cyber Week, generals talk up the future of military conflict the same way big-tech executives brag about the Metaverse. Both adhere to a genre of techno-utopianism that distracts from a present reality of pervasive surveillance and endless war. It is hard to tell what is just the discharge of hot air and what new technologies a militarized technology industry is capable of churning out. But it is clear that war is as lucrative an investment as ever, and Israel’s military establishment is eager to keep it that way.

Sophia Goodfriend is a Ph.D. candidate in Anthropology at Duke University with expertise in digital rights and digital surveillance in Israel/Palestine.  Twitter: @sopgood.