After major public campaigns inside Israel and abroad, pressure on the Rwandan government not to accept refugees deported by Israel, and ultimately effective legal challenges, Israel announces it will scrap its mass deportation plan and work with the UN to resettle African asylum seekers in Western countries. This is a huge victory but there may be more fight ahead.

[Important update added at the bottom of this article.] 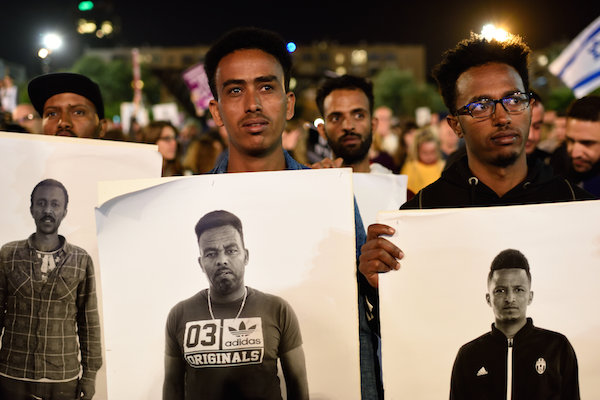 This is a huge victory, primarily for the thousands of asylum seekers hopefully headed to countries that, unlike Israel and Rwanda, are willing to accept them. For those refugees who will finally get to stop living in fear of deportation, indefinite imprisonment, increasingly hostile laws targeting them and their livelihoods, and the insecurity of living without any legal status, this is among the better foreseeable outcomes.

It is also fairly clear that the massive anti-deportation movement played a pivotal role in pushing the Israeli government to agree to grant status to at least some of those African asylum seekers who are not resettled by the UN. Paradoxically, it was likely the deportation plan itself that motivated the UN to make its part of the deal happen.

The combination of anti-deportation rallies across Israel and around the world, activists and journalists (+972 Magazine included) working to expose how Rwanda and Uganda refuse to actually absorb the refugees Israel deports there, public and international pressure on the Rwandan government, strategic lawsuits challenging the deportation plan itself, and the right timing, all played a role in stopping the mass deportations.

Speaking through tears Monday afternoon, Michael, a 25-years-old Eritrean asylum seeker, described the news as a huge victory. “It’s all because of our struggle. God and the nation of Israel helped us — first they stopped the deportation, but now they are going to get us status, and that is really great.”

“They wanted to send us to Uganda and Rwanda,” he said, getting cut off between sentences as passersby on the street stopped to congratulate him. “That would have been a disaster. But the people of Israel fought for our rights and in the end we won. I simply have no words.”

“This is an example of how men and women on the ground succeeded in finding legal cracks and created change in public perception,” said Sigal Avivi, a prominent refugee activist. “If we had just remained silent — the deportation would have happened and people would have been sent to find refugee again, at great risk to their lives — which has already claimed many lives.”

Now for the cautions.

All of that said, the bottom line is that the plan to deport tens of thousands of African asylum seekers to Rwanda, a country that never had any intention of absorbing them, has been called off. The African asylum seeker community in Israel can breathe a huge sigh of relief today. Even if there is a lot more to fight for ahead, the worst outcome seems to have been averted.

Late Monday night, Benjamin Netanyahu announced that due to pressure from his political base —which is angry that he would agree to settle any African asylum seekers in Israel — he is suspending the UN plan. Whether the resettlement plan is ultimately re-instituted or not, Netanyahu’s admission that it is no longer viable to deport asylum seekers to Rwanda remains a fact. And while the fate of tens of thousands of Eritrean and Sudanese asylum seekers is once again in limbo, hopefully they can sleep just a little bit sounder tonight knowing that forcible deportation to Rwanda is off the table.