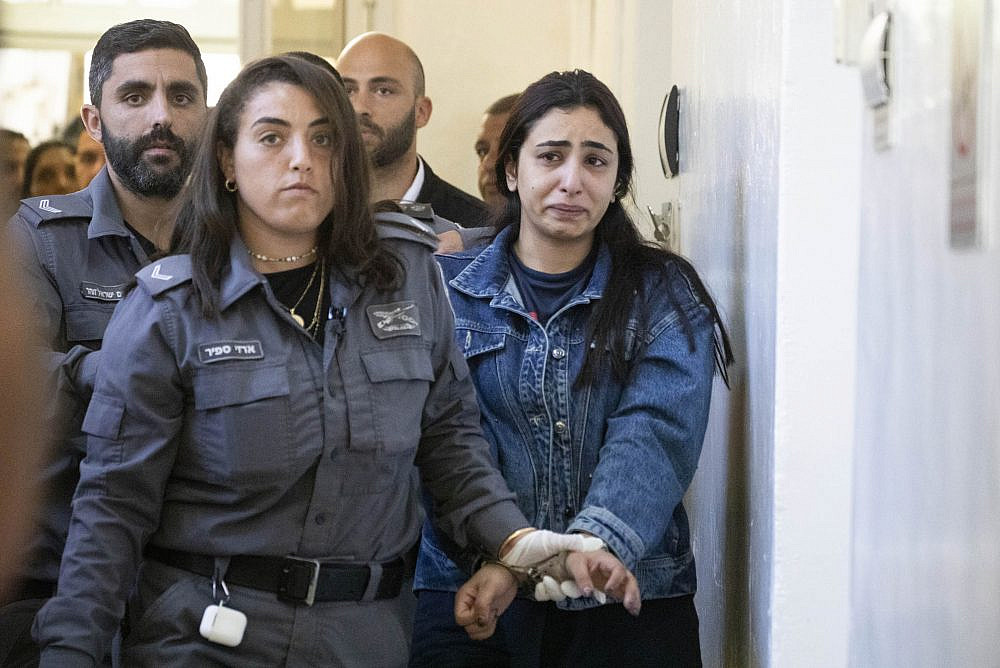 Palestinian journalist Lama Ghosheh is led into a hearing at the Jerusalem Magistrate's Court, accused of identification with a terrorist organization and incitement to violence because of Facebook posts, September 12, 2022. (Oren Ziv)

An Israeli court indicted a Palestinian journalist on Monday for identifying with a terrorist organization and incitement to violence, based on 11 posts taken from her personal Facebook profile. The indictment claims that in some of her posts, Lama Ghosheh praised the activities of Palestinian militants in the West Bank and Gaza, after they were killed by the Israeli army.

Ghosheh, 30, was arrested last week at her home in the Sheikh Jarrah neighborhood of occupied East Jerusalem. The prosecution asked the Jerusalem Magistrate’s Court to prolong her detention until the end of the legal proceedings; on Monday, the court extended Ghosheh’s detention until Sept. 18.

As she entered the hearing, Ghosheh cried out in tears that she wanted to see her children, and that she was being kept in harsh conditions in Hasharon Prison, near the Israeli city of Netanya. In addition to Ghosheh’s family members, around 30 Palestinian journalists and photographers, working for local and foreign networks, came to the hearing at the court, to report and to express solidarity.

Following an appeal by Ghosheh’s lawyer, the Jerusalem District Court agreed on Tuesday to her release to house arrest on conditions of NIS 50,000 bail and a prohibition on using the internet.

Working as an independent journalist, Ghosheh’s articles have appeared, among other places, in the Al-Qastal news network, an independent media outlet covering Jerusalem. She has previously published a series of articles in which she interviewed released Palestinian political prisoners. According to a police statement published before the indictment was filed, “the suspect tends to interview released prisoners and cover various events, and shares these publications on social media,” suggesting that the reason for her arrest may not only have been social media posts. The statement made no mention of the fact that she is a journalist.

Since 2020, Israel has imprisoned 26 Palestinian journalists, many of them on charges of incitement on social media. The police say that when monitoring her online activity, they found “content of incitement to violence, support and identification with a terrorist organization and other crimes.” Journalists in East Jerusalem, however, believe that Ghosheh was arrested to convey a message to others. “It’s not random that they chose her,” said one Palestinian journalist who is familiar with Ghosheh’s work, and who asked to remain anonymous for fear of reprisal from the Israeli authorities. “Many in East Jerusalem share posts about what’s happening in Nablus and other places. Every so often, someone is chosen and arrested so that the others will be afraid to speak out.”

He noted that while thousands, perhaps tens of thousands, share similar content, the police prefer to focus on well-known journalists and activists. “For Palestinians, this is routine content that gets posted on social media, but Israel doesn’t see it that way,” he added.

The indictment details 11 Facebook posts made by Ghoshe from the past few months, including during the latest Israeli military assault on Gaza. In none of the listed publications is there a direct call for violent action.

As is customary in indictments relating to social media publications, next to each publication is indicated the number of “likes” it received. In the case of Ghosheh, some of the posts received a few dozen likes at most.

At Monday’s hearing, the police representative stated that Ghosheh is a public figure, and that her Facebook profile had 5,741 followers. This is not a particularly large number, and there are other journalists in East Jerusalem with tens of thousands of followers on social media.

Ghosheh’s Facebook profile has been deleted since she was arrested, apparently by the authorities, so it is not possible at this stage to compare the police translations with the original posts. At the hearing on Monday, her lawyer asked to examine the complete investigation materials, including the screenshots of the posts that appear in the indictment, to make sure that the translation is accurate. In the past, police have inaccurately translated Arabic posts by Palestinians, most famously in the case of poet Dareen Tatour who spent months in prison and years under house arrest between 2015 and 2019. Palestinian poet Dareen Tatour speaks with her lawyer Gaby Lasky before the hearing in her case begins in the Nazareth Magistrate’s Court, May 3, 2018. (Oren Ziv/Activestills)

The indictment states that Ghosheh “uploaded to the Facebook profile content of this kind that was widely circulated, and which also provided a platform for others to symbolically and overtly express their support for the content through ‘likes.’” The document does not contain screenshots of the posts or content, only a description of them in Hebrew.

One of the posts that appeared in the indictment was uploaded on May 25. It showed, the indictment claims, “a photograph of masked armed activists, wearing headbands of the Islamic Jihad organization.”

The photo was accompanied by the following text: “It is clear that the phenomenon of armed units is a model that will be replicated in the cities of the West Bank, first in Jenin, the proud, stubborn and unbroken, and then in Nablus, the Mount of Fire, I am absolutely sure that the one that comes next will lead to many clashes, the glacier of fear is already broken and the blood is returning [to flow] in the veins.”

The indictment states that the hashtag “resistance is an unending gift” was added to the publication, and that it received 37 likes and three comments.

Another post mentioned was uploaded on Aug. 9, after soldiers killed Ibrahim al-Nabulsi of the Al-Aqsa Martyrs’ Brigade in Nablus. Ghosheh wrote several posts on the subject; according to the indictment one of them said: “Why was it easy to announce the rebel’s martyrdom. Everyone is accustomed to the habit of life. Everyone wants a miracle. But the nature of life or you will perceive it. Without the knowledge and sharpness of the living hero. The echo of the bullets for an ultimate verdict. For the clear model of action.”

In another post mentioned in the indictment, Ghosheh shared a video in which, according to the prosecution, stones are seen being thrown as a military jeep. Accompanying the video, the prosecution claimed, is a text that reads: “In Silwad, stones rain down on the occupation.” The prosecution stated that “the accused added the words: ‘Good morning Silwad,’ with a red heart [emoji].” This post, according to the indictment, received a total of 6 likes and 2,187 views. Following the hearing, Nasser Odeh, Ghosheh’s attorney, told reporters that this is the first time such an indictment has been filed against a journalist in Jerusalem.

“We told the court that a large part of her work is related to freedom of expression, and we also asked the court to release her so that she could see her children,” Odeh said. “However, the prosecution rejected our request, and asked to extend her detention until the end of the proceedings. The judge refused to give a decision on the request, and decided to postpone the hearing until [Sunday] Sept. 18.”

“In the hearing on Sunday, the judge will make a decision either to extend the journalist’s detention until the end of the proceedings or to release her under strict conditions [i.e. house arrest], which will prevent her from working as a journalist, accessing the internet, and using a computer.”