The very first thing visitors to Israel see when they walk through Ben-Gurion International Airport’s arrivals hall is an illuminated, panoramic landscape photo showing an area where the West Bank meets Israel. Right smack dab in the middle of it is none other than Israel’s separation barrier. (The road can be seen in the center, with two barbed-wire outer fences on either side and a lighter weight fence in the middle.) 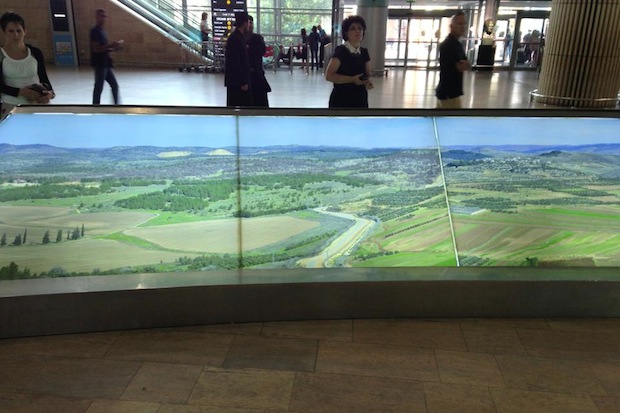 It is as if Israel is proudly saying to its visitors: Welcome to the land of milk and honey, segregation and oppression. As if the wall/fence/barrier has become such an integral part of the landscape that whoever installed this lovely photo montage didn’t even notice.

Or maybe they forgot to photoshop it out and it’s a major oversight (that somebody made a real f–k up)?

Either way, this is mind-boggling – and it certainly takes Israeli hasbara (state PR) to a whole new level. Could it be Israel has reached a point where it is so sure of its own policies that parading around a photo of the ugly separation barrier is totally normal? Considering the way it has been parading around new settlement construction during peace talks, I wouldn’t be surprised.

(I put in a call to the Israel Airport Authority for comment, and still have not been able to get through to anyone.)

The photo was uploaded to Facebook Monday morning by Hagit Ofran, settlement director of Peace Now, and published here with her permission.