With over 14,000 demolition orders issued against Palestinian structures in Area C since 1988, Israel is maintaining a vast system of control-by-threat that at once dispossesses and undermines social stability. 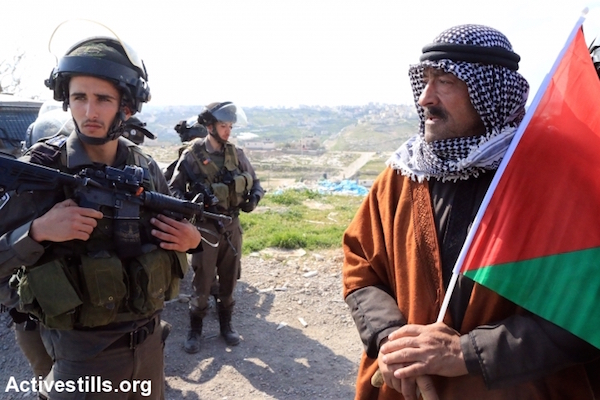 Palestinian, Israeli and international activists protest against Israeli plans to annex parts of the West Bank area behind the wall (E1) to the Jerusalem district, at the city of Eizariya, West Bank, on Israeli election day 2015. Over 15,000 Palestinians live in what Israel terms as the ‘E1 area’ in 45 communities. Eizariya, West Bank, March 17th, 2015. (Ahmad Al-Bazz, Activestills)

Israel has issued over 14,000 demolition orders against Palestinian structures in Area C of the West Bank since 1988, according to a new report released by the UN’s humanitarian agency. Nearly 3,000 demolitions have been carried out in that time, leaving more than 11,000 orders outstanding that affect over 17,000 structures.

OCHA-oPt, the UN’s Office for the Coordination of Humanitarian Affairs in the occupied Palestinian territory, derived its report from figures released earlier this year by the Civil Administration, Israel’s governing body in the West Bank.

Demolitions in the West Bank have been under scrutiny recently, following a period of intensive activity in which Israel demolished 143 Palestinian structures in the span of a month. Israel justifies demolitions by arguing that the structures in question have been built without a permit. However, it is almost impossible for Palestinians in Area C to obtain building permits: between 2010 and 2014 only 1.5 percent of permit requests were granted to Palestinians, the report states.

In addition, 77 percent of the demolition orders have been issued against structures located on private Palestinian land; permits for building in these areas were likely refused because of the lack of a planning scheme or “outline plan.” Currently, only one percent of land in Area C has been designated for Palestinian development.

The Coordination of Government Affairs in the Territories (COGAT), Israel’s military government under which the Civil Administration operates, issued a response to the report via the Israeli Foreign Ministry. The statement claimed that the statistics in the report do not reflect the facts on the ground and said that 13 master plans for Palestinians in Area C are being processed by the Civil Administration; four of these have apparently completed the planning process.

COGAT’s response does not cite which statistics it believes to be inaccurate, nor does it address the fact that OCHA took its information from a Civil Administration database. COGAT has not yet responded to a request for clarification on these issues, as well as a request for confirmation of what percentage of Area C land the proposed master plans cover and how many of its 300,000 Palestinian residents they will cater for. If a response is received, an update will be added to this post. 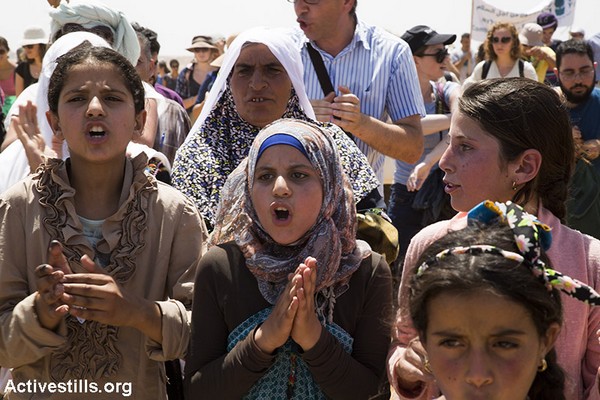 The figures presented in OCHA’s report illustrate the scale of the threat of demolitions for Palestinians living in Area C. Although only a minority of demolition orders have been executed, they do not expire, “leav[ing] affected households in a state of chronic uncertainty and threat.” This exerts tremendous psychological pressure on affected individuals, who are forced to live with the sword of Damocles dangling over their necks. When orders are carried out they result in homelessness, loss of livelihood and deepening poverty. Moreover, the Israeli army has at times used demolitions both as bargaining chips to pressure Palestinians into stopping anti-occupation demonstrations, or as a means of collective punishment.

Yet these statistics, while headline-grabbing, are not the most telling aspect of the report. More revealing is the information presented regarding the spatial distribution of demolition orders: nearly 60 percent of demolition orders are hanging over communities which partly lie in Area A and/or B.

However, for many communities in the West Bank, only built-up areas were designated as Area A or B. Much of the land that fell into Area C was empty and should in fact have been left available for those Palestinian communities in built-up areas to expand into. This created a situation in which Israeli settlements have vast swathes of open space into which they can expand, while Palestinian towns and cities will gradually asphyxiate from lack of space needed to accommodate population growth. 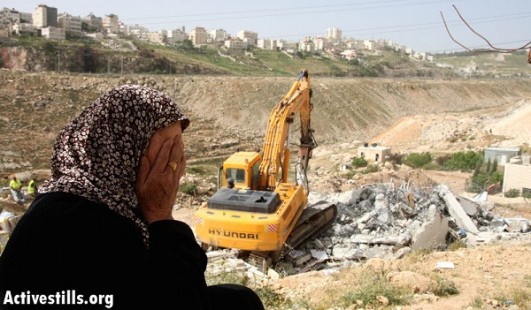 House owner weeps while Palestinian contract workers for the city of Jerusalem, demolish her house in Anata, April 14, 2008. (Meged Gozani/Activestills.org

It is this, more than anything, which reflects Israel’s policy in the West Bank: to control and coop up its Palestinian population while engineering optimal conditions for its own deepening hold on the area. The demolitions are simply one facet of this policy, which has many other faces: military training exercises and designation of land as a firing zone, archaeological sites or conservation areas, all of which pushes Palestinians off their own territory; theft of Palestinian water resources; collective punishment; and, perhaps most drastic of all, forced transfer of Palestinians under Israeli government plans (or, in COGAT-speak‘s horribly euphemistic and mildly dystopian terms, “regularizing the communities of Palestinian Bedouin”). Particularly affected are Bedouin communities in the Jordan Valley, which are regularly subjected to the measures listed above as part of Israel’s strategy of driving the Palestinians out in order to eventually annex the area.

This web of activities amounts to a policy of death by a thousand cuts. Individually, these measures are devastating to those affected. Collectively, they destroy communities and drastically undermine social stability. And for those with that fateful piece of paper at home which will one day cause them to lose their house, their land, their means of subsistence or their way of life, they are forced to live with one eye on the clock.