Like the failed peace process or the policy of severing Gaza from the West Bank, the plight of the Bedouin in Israel is one more long-term problem that there is just no time to solve.

Two Israeli sisters, 10 and 13, were wounded yesterday by Hamas rocket fire in the Negev. One of them is in critical condition with stomach wounds and underwent emergency surgery in Be’er Sheva, according to Israeli news. Maram and Atir Wakili are Bedouin; their grandfather Ibrahim, interviewed on Channel 10, explained that they live in far-flung areas where they are unable to hear sirens. And if they had heard one, they had no protected area where they could take refuge.

Ibrahim heads a council that represents unrecognized Bedouin villages. These clusters of tents and shacks scattered around the region lack basic infrastructure and services, including water lines and electricity grids, because they do not formally exist. Some have been destroyed by government order dozens of times; after more than six decades of neglect, recent government attempts to formalize their status were roundly criticized by human rights organizations and some Bedouin groups. They argued that the community had not been sufficiently consulted in the process, and that the solutions were coercive and unfair as a result. 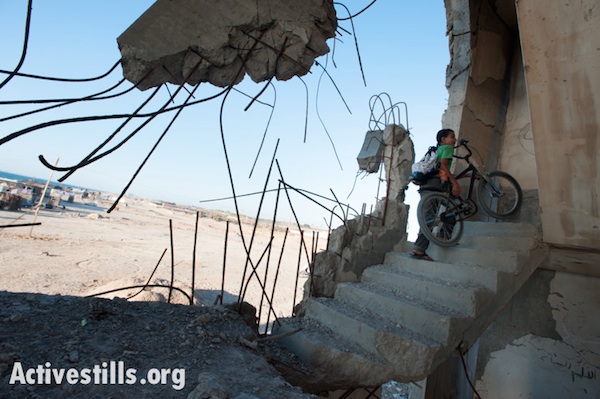 A Palestinian child plays among the ruins of buildings destroyed by Israeli air strikes in the 2008-2009 war known as Operation Cast Lead, July 4, 2012. (Photo by RyanRodrick Beiler/Activestills.org)

The plan has been scrapped. The villages remain unrecognized and under-serviced. “We asked the government and the Home Command to provide us protection,” said Ibrahim Wakili, speaking of the rocket attacks. “But to this day, nothing has been done.” He continued, “We don’t want wars, we are against wars. We don’t want our children to die, not in Israel and not in Gaza.”

They are not the first Israelis physically wounded in the conflict. But perhaps because there have been so few, each story stands out. One elderly woman was at home when a rocket landed in her living room, she told reporters from her hospital bed, speaking in Russian through a translator. In Ashdod, a direct rocket hit on a gas station created a large ball of fire. One driver, partly disabled from injuries in the Yom Kippur war, was unable to flee his vehicle and was seriously wounded. A 16-year-old teenager in Ashkelon sustained medium to serious shrapnel injuries when a rocket landed about 30 meters away from him.

Read +972′s full coverage of the operation in Gaza

It is hard to grasp each such sickening story among Palestinians, with over one thousand wounded – not to mention over 190 killed – and zero contact with any, hardly even through the news. Israeli psychology depends on their victims being numerous and faceless. Israel trembles at the thought of more individual symbols of Palestinian suffering. Just not another Mohammed Abu Khdeir, or Mohammed al-Dura. Eighteen family members in Gaza killed by IDF airstrikes are hardly discussed here.

So what will the Bedouin sisters’ situation mean to most Israelis? They may confront two immediate thoughts: how terrible it is that the state doesn’t provide the Bedouin towns with sirens or shelters because it doesn’t recognize them; and how terrible it is that Hamas fires rockets at Bedouin just because it hates Israel. Most will reflexively relate only to the latter.

Further, another major news item will help blot out nagging doubts: the IDF released footage of an aerial attack on a Gaza target that was aborted when the pilot discovered there were children in the area. Broadcasters and headlines puffed with pride showing footage that was clearly supplied for “hasbara” purposes. This item has made its way across the airwaves all day yesterday, part of the barrage of narrative nuggets coming faster and thicker than rockets: Israel is precise. Israel is the most moral army. When there’s a war, we do better than anyone else.

But like this whole war, the obsession with daily strategy and short-term legitimacy means deeper and longer-term issues are the real victims.

The Bedouin of the Negev are cut off from Palestinians in Gaza or the West Bank, distinct from other Arab communities in Israel, rebuffed by Jewish Israeli society. Now their children are among the youngest Israeli victims of the war so far, as a direct result of their status: “lower than fourth-class citizens,” their cousin told Haaretz.

Like the failed peace process, like the policy of severing Gaza from the West Bank, like the years of rocket fire on Israel’s southern residents, the 47-year military occupation of Palestinian territories and the stateless wandering of so many since 1948 – the plight of the Bedouin in Israel is one more long-term problem that there’s just no time to solve. We’re at war.

Related:
The unfolding lie of Operation Protective Edge
The occupation will last forever, Netanyahu clarifies
How Netanyahu provoked this war with Gaza