Update: The IDF has confirmed that the mortar shell that killed a 4-year-old Israeli child Friday evening was not fired from a UN-run shelter for Gazan refugees, as earlier reported by Haaretz.

On the 46th day of Israel’s Operation Protective Edge at least 113 projectiles were fired into Israel from Gaza. A mortar attack early Friday evening  killed four-year-old Israeli child Daniel Tregerman – the first child fatality on the Israel side since the start of hostilities more than six weeks ago. This was also the first Israeli fatality since a temporary ceasefire between Hamas and Israel broke down last Friday and fighting resumed.

Haaretz reported that, according to a military source, the mortar that killed Tregerman was fired from a school used by the UN to house Gazan refugees in Gaza City. 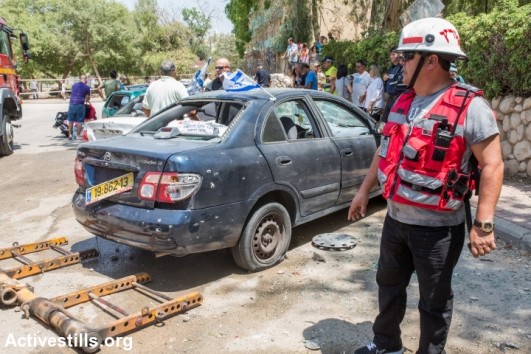 Israelis check the scene in which a rocket shot from the Gaza Strip has hit a street in the city of Beer Sheva, August 22, 2014. (photo: Activestills)

Meanwhile, Friday’s death toll in Gaza reached seven, a day after Israeli airstrikes killed 38 across the Strip. More than 65 Palestinians have been killed since Israel relaunched its assault on Gaza late Tuesday, bringing the total Palestinian death toll in the six-week assault to more than 2,090.

According to Ynet, after Israel killed several senior Hamas military chiefs on Wednesday, the group’s military wing executed 18 alleged collaborators on Friday. Seven were killed by Hamas militants in a central Gaza square in what were reportedly the first public executions in the Strip since the 1990s. Eleven other alleged collaborators were killed by firing squad at an abandoned police station. 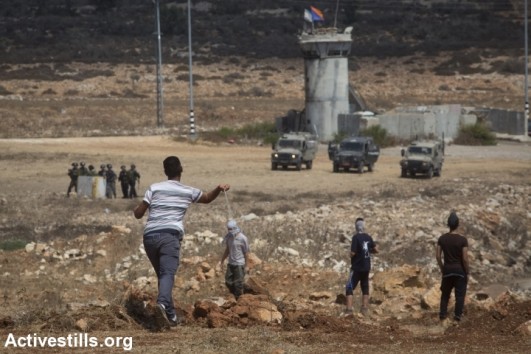 Palestinian youth throw stones during a weekly protest against the Israeli occupation and a solidarity protest with Gaza, in the West Bank village of Nabi Saleh, August 22, 2014. (photo: Activestills)

While in the West Bank, hundreds protested all over in solidarity with Gaza, particularly in Hebron, where Hamas supporters clashed with Palestinian Authority security forces. According to media reports, tear gas was used to disperse the crowd, which was advancing towards a nearby Israeli army checkpoint.

Related:
Photos of the week: Ceasefire begins and ends
Israel kills three top Hamas commanders in Gaza
What would Israelis say to families of civilian casualties in Gaza?