The Knesset passed a law allowing courts to order doctors to force feed Palestinian hunger strikers. But the doctors, it appears, aren’t  so keen on violating basic principles of medical ethics. 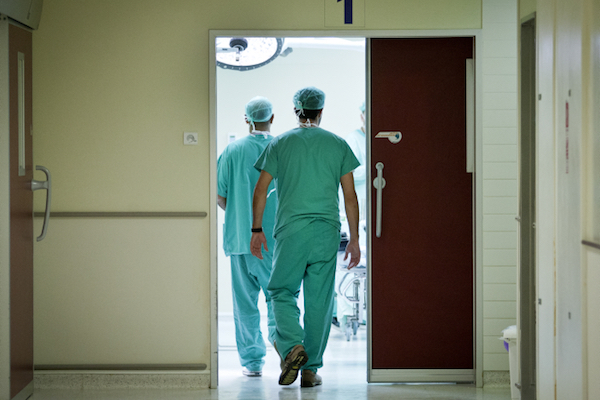 Illustrative photo of Israeli physicians at a hospital. (Moshe Shai/Flash90)

A human, medical and political drama unfolded over the past few weeks at Asaf Harofeh Medical Center, just outside of Tel Aviv. At the center of the drama were two Palestinian men being held by Israel without charge or trial — Anas Shadid, 19, and Ahmad Abu Farah, 29 — and hospitalized due to their deteriorating medical condition brought on by extended hunger strikes. The pair were arrested in August of this year, and began their hunger strikes less than a month later, soon after being placed in administrative detention.

A few weeks ago, after the Israeli High Court of Justice rejected the two men’s petitions seeking to be released from administrative detention, they stepped up their hunger strike — declaring that they would also stop drinking water. They are refusing to undergo physical medical examinations, blood and other laboratory tests, imaging, and heart monitoring.

Shahid and Abu Farah managed to reinvigorate the debate surrounding whether physicians are compelled by Israel’s law allowing the forced-feeding of hunger strikers. The ‘Force Feeding Law’ was passed in July 2015 but the state has yet to use it against a hunger striker. The law allows authorities to seek a court order compelling physicians to force feed or treat hunger strikers with infusions or force-feeding tubes against their will. The state is supposed to approach the courts when medical personnel believe a hunger striker’s life is in danger and they are refusing treatment and sustenance.

The basis of all medical treatment is the relationship between doctor and patient. It is a relationship based on trust and the knowledge that the physician will act for the good of the patient’s health and recovery, all the while taking into consideration his or her autonomy, and the principle of informed consent. In practice, there are prohibitions against force feeding in the medical ethics rules because doing so violates the principle of patient autonomy, ignores the lack of informed consent, and constitutes harmful, inhumane and degrading treatment that can even be considered torture. 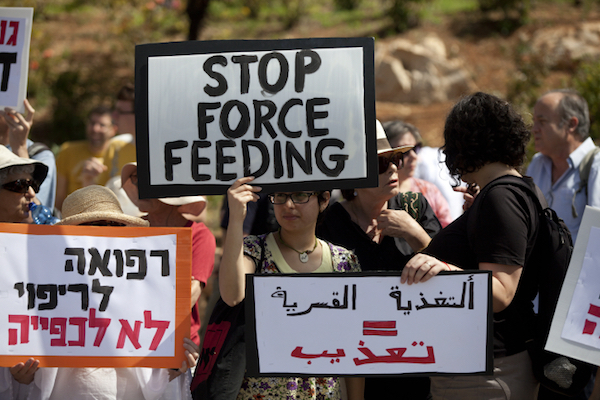 The discussion that took place surrounding the legislation of the force feeding law saw strong objections from the Israeli Medical Association and the Israeli Bio-Ethics Council, due, among other things, to the fact that the doctors believe hunger strikers can be given treatment in accordance with the Patient’s Rights Act. The Health Ministry, on the other hand, supported the law.

Since the passing of the force feeding law, many Palestinian detainees have held hunger strikes in protest of being held in administrative detention, a practice through which Israel imprisons Palestinians without charge or trial, sometimes indefinitely. Some of these hunger strikers eventually had to be hospitalized in Israel; many of them drank only water without vitamin or mineral supplements, and refused to undergo any medical examinations, including blood tests. That kind of situation makes medical treatment very difficult. The principles of treating hunger strikers include an ongoing dialogue between doctor and patient: the latter must understand the consequences of any actions at all stages of treatment, and must state whether he or she is willing to accept treatment at every stop along the way, or restate their opposition.

A hunger strike is a form of nonviolent protest, used only when someone sees that there is no other way to oppose the injustice he or she faces — in this case, administrative detention. The administrative detainee is up against the state, the Israel Prison Service, and the entire security establishment, which on the one hand do not want to give in to public pressure, but on the other hand are worried about the potential consequences of the hunger striker’s death while in Israeli custody.

According to research by Physicians for Human Rights-Israel, hospital staffs across the country have stood up to the security establishment’s pressure to break the hunger strikes and punish the strikers. Since the law passed, there has been only one case in which the state has threatened to use the law. However, since most doctors have refused to force feed patients, authorities understood enough to decide not to attempt to use the law. In most cases, the medical personnel have respected the will and autonomy of their patients, refusing to contravene basic principals of medial ethics.

It is interesting to note that hospital-level ethics committees have actually granted doctors permission to force feed patients in cases where their health was deteriorating. Yet the medical personnel “on the ground” refused to do so, arguing that using force and strapping patients to their beds during the course of treatment (which could last at least a couple of days) could threaten their health and life.

The medical personnel’s steadfastness despite the pressure on them is praiseworthy, and should force a revived discussion about legislation that contravenes principles of medical ethics. Such initiatives may serve political goals, yet the force feeding law demonstrates that they are bound to fail. Medical ethics were intended to protect all patients and prevent the violation of their human rights. The medical community understands well that ethics protect every doctor in situations in which political or security considerations are prioritized over pure medical decisions.

Thus, any law that violates basic human rights while trampling upon medical ethics is bound to fail. The solution to security and political dilemmas need to be found in accordance with the ethics and norms of human rights — otherwise, they will never be implemented.

Dr. Birmans is a member of the Ethics Committee of Physicians for Human Rights – Israel. This article was first published in Hebrew on Local Call. Read it here.