In its coverage of the elections, the Israeli media generally portrays political parties with pictures of their chairpersons — that is, except for the joint Arab list. 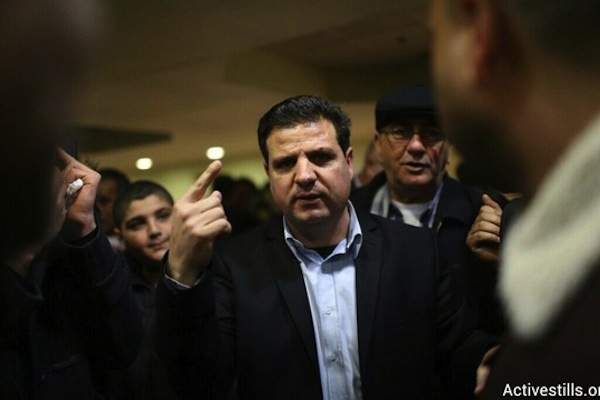 Why is the Israeli media representing the Arab ‘Joint List’ with images of Amhad Tibi instead of the head of the list, Hadash Chairman Ayman Odeh? Pictured, Ayman Odeh. (Photo: Oren Ziv/Activestills.org)

Earlier this week, Oren Persico called out the Israeli media for its representations, or lack thereof, of non-Jewish Israelis. The story, in case you missed it, is that the Israel Hayom newspaper decided only very late in the game to include head of the Arab Joint List Ayman Odeh in its portraits of Knesset candidates. The change, as late as it came, is praiseworthy, and we should hope that Israel Hayom won’t stop there.

The problem with the Israeli media’s representation of the Arab public, however, is more widespread than that. In their election graphics, a number of Israeli media outlets, from Yedioth Ahronoth to news websites “Mako,” “Reshet” and “NRG,” all display images of MK Ahmad Tibi and not Ayman Odeh, the head of the election slate both men are running on, the Joint List. For the other parties, those headed by Jews, the party chairpersons are the people whose likenesses the news editors chose to display.

The harm of symbolically eradicating Arabs from the media’s coverage of elections — as was the case in Israel Hayom until yesterday — is clear. But replacing Odeh with Tibi is surprising: why does the media refuse to accept that Odeh is the head of the Joint List?

There is one explanation, which is fairly technical. Tibi is well known and Odeh is not; the newspaper editors don’t want to make their readers think too hard. Similar behavior is often seen on interview programs, which give preference to better-known personalities. When choosing children’s books, educators recommend flipping through the first few pages and counting the words your child doesn’t know. The higher the number of unfamiliar words, the harder and more challenging the book will be for your child. Out of fear of losing readers, media outlets don’t want to burden people with names and personalities whom they don’t know.

A technical explanation, however, is not enough. Ten, sometimes 11, Jews — and it’s too hard to highlight even one unknown non-Jewish candidate? It’s not only paternalistic to decide who the Arab representative is, and it’s more than the fear of bringing home an unfamiliar Arab. It’s the racist idea that all Arabs are the same.

There is diversity among the Jews: right wing, left wing, religious, secular, etc. Among Arabs there is none; if you’ve met one Arab, you’ve met them all. Why bother learning about Odeh or his political positions? By forming a joint list, the Arab parties saved newspaper editors from having to decide whether to represent the Arabs as one bloc or in four different political parties. The Arabs are all the same.

A long time ago there was an Israeli comedy show called “Nikui Rosh” (“Clearing your head”). One of its episodes was a satire of the 1970s American sitcom “All in the Family.” In it, Archie Bunker tells his wife that Ahmad didn’t coming to work that day. “But Archie, our Ahmad is named Abdullah,” his wife says. “Abdullah, Muhammad, Mustafa, what’s the difference? They’re all Ahmad,” Archie responds.

Elad Harlev is a Master’s student of communications at Tel Aviv University. This article was first published in Hebrew by The 7th Eye media watchdog website. It is reproduced here with permission.