facebook twitter email link
Now that negotiations have officially failed, it’s time for the U.S. to join three South American countries and endorse Palestinian unilateralism. True, a viable Palestinian state will not be ready by August 2011, but that’s besides the point. This declaration is only a means to an end 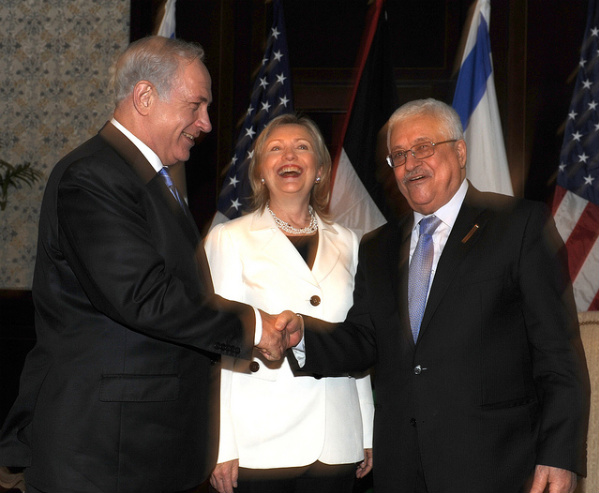 Remember when we used to laugh? (Photo: Israel Foreign Ministry)
As expected, the negotiations between Israel and the Palestinians are now officially dead. Last night, Israeli and U.S. officials confirmed that the Obama administration is abandoning its effort to renew the freeze on settlement building in the West Bank. As the NY Times reports:

After three weeks of fruitless haggling with the Israeli government, the Obama administration has given up its effort to persuade Prime Minister Benjamin Netanyahu to renew an expired freeze on the construction of Jewish settlements for 90 days, two senior officials said on Tuesday.

The decision leaves Middle East peace talks in limbo, with the Palestinians refusing to resume negotiations absent a settlement freeze and the United States struggling to find another formula to bring them back to negotiations. It is the latest setback in what has proved to be a tortuous engagement for President Obama.

Dust yourself off, start all over again

Tortuous indeed. And now that the talks have officially failed, the region is once again on the verge of very dangerous and violent times. Before things spiral out of control, now is the time for President Obama to embrace this failure and move on to the only step that can save the two-state solution, playing the Wild Card: endorsing Palestinian unilateralism (more on the Wild Card option here).

The White House must begin to fully appreciate this option, since there are calls in Palestine to begin steps towards unilateralism in the very near future, and not wait for Palestinian PM Salam Fayyad’s declaration of independence in August 2011. In fact, just this week, three South American countries – Brazil, Argentina and Uruguay – have decided to announce their recognition of the Palestinian state.

What the Obama administration must understand is that unilateralism should not be perceived solely as a route taken out of frustration from the failure of another. It is a solution, a route that will be taken to set into play a new dynamic – and a new set of international laws that will begin to be applied to the Palestinian state.

But many say, despite PM Salam Fayyad’s partial success in institution building, that there is no way a viable Palestinian state will be ready by the summer of 2011. This is true, Fayyad has done well but the Palestinian economy is not prepared to breath on its own. The only thing that keeps it alive is donor aid, and there is little to make for a vibrant private sector – not to mention the daily obstacles of occupation.

So no, of course a state won’t be ready. But that’s not the issue. The issue is about shifting the problem from “should there be a Palestinian state” to “how do we get this state to work properly and give it full sovereignty over its territory”. This is exactly what happened in Kosovo 2008. The Russians vetoed its declaration, just as the U.S. will most probably do (unwisely, I must add). But Kosovo is in a way a “fait accompli”. The question today is not whether there should be an independent Kosovo any more – it’s about how to make it work now that it’s there, now that it’s a fact on the ground.

Stop trying to sit them down – at least for now

Going back to the negotiating table would be a big mistake. As Yossi Alpher points out, continuing with fake negotiations will jeopardize not only Fayyad’s acheivments, but also those that the U.S. itself has invested so much in, such as the work of American General Keith Dayton, who recently left the region after five years of hard work as the U.S. Security Coordinator for Israel-Palestinian Authority in October. Amongst other things, Dayton oversaw the training of Palestinian Authority forces, and is considered by many to be a key factor in the drop of terror emanating from the West Bank:

“Rather than trying to sit the reluctant sides down to reach an elusive comprehensive solution within a year, the US should be capitalizing on Dayton’s achievement in order to foster an indirectly-negotiated but internationally-recognized partial solution that capitalizes on the Palestinian unilateral state-building initiative and concentrates on borders, settlements, water and security.”

In his op-ed from the 14th of November, Zvi Barel articulates why the recognition of a future unilateral declaration will actually help the process:

“International recognition of a Palestinian state should not undermine the negotiations. Except that under the new circumstances the negotiations will be between two states of equal status. If Israel announces that it will cease negotiating as punishment, well, that is already what has been happening for a while. Israel will annex the settlements, as further sanctions? In any case they function as an inalienable part of Israel and even without official annexation they are part of the whole, at least according to the prime minister.”

And to all those who threaten that a unilateral move would be a violation of the Oslo accords, Barel sets things straight:

“For its part, Israel is threatening that if the Palestinians will take such a unilateral step, it will consider this a fundamental violation of the Oslo Accords and can consider itself free of all its obligations. Interesting. In an interview on Israel Radio in 2002 Netanyahu said that “the Oslo Accords are null and void – after all, what is left?”

Although all the recent signs point to Obama vetoing any Palestinian move in the Security Council, now that the talks have died his administration should think again about the current route and consider the Wild Card as an option. Anything is better than sitting around and watching Israel obstruct any movement forward.