Following a growing number of online grassroots peace initiatives, activists are calling for the first significant demonstration against the sounding war drums.

First came the Iranian women, with a series of video clips made especially for International Women’s Day, speaking out against war from a feminist perspective. Then came the Israeli reply, with the Coalition of Women for Peace publishing a declaration stating they “oppose the inflammatory rhetoric of war mongers and the recently advertised plan of the Israeli government to attack Iran. Such an assault is not likely to stop the Iranian nuclear plan, but is likely to lead to regional war, loss of human life and a long term environmental damage.”

To this the Iranian group responded with enthusiasm, and called for an end to militarization and sanctions. In an interview with Ha’aretz (Hebrew), one of the Iranian women said that while her group began the struggle, resistance to the war is spreading throughout many groups in Iran.

Then, on Saturday night, online anti-war activism took a sharp rise following an Israeli couple’s initiative to dedicate “love posters” to the Iranian people. The Israeli posters were soon answered by Iranian ones, and today a new Facebook photo album started giving voice to Iranians who are not only against the war, but also openly criticize their government’s nuclear vision, stating they seek only peace and democracy. 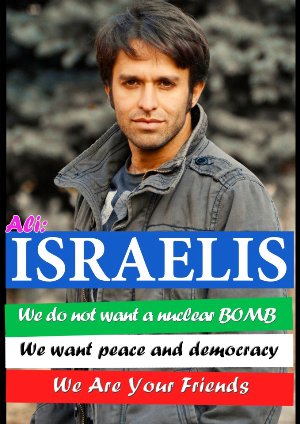 Iranian man against the war and the bomb (source: Iran for Peace and Democracy)

Perhaps it was all of these web grassroots initiatives that led several Israeli activists to declare an anti-war demonstration, set to take place this coming Saturday night. Within hours, some 700 Israelis said they would attend – a considerable number in such short time and for such a cause, in local terms. “We will not agree to an irresponsible Israeli attack in Iran, leading to a war with an unknown end-date and casualty count,” write the activists. “Polls show: Most of the Israeli public opposes the attack being planned by Netanyahu. Even the leading brass of the Israeli security establishment, past and present, opposes such an attack.”

They then go on to blame Netanyahu for planning a war in order to divert public attention from burning social and economic questions that set ablaze the summer J14 protest, and could get people out on the streets again this coming spring or summer. “But this week, we saw something amazing. The internet allowed us to convey messages to citizens on the other side and receive messages back from them. Messages of peace, solidarity and hope. This exciting and refreshing dialogue leads to one clear conclusion: we, the citizens of Israel and Iran, are not enemies. Our leaders are inciting a disastrous war – and we’re all trying to prevent it. Instead of being dragged into a regional war – we demand a solution of peace among all the region’s peoples.”

Poster advertising the demonstration on Saturday

It now remains to be seen if the same fear of war, the same faith and hope, the same humanly brotherhood and sisterhood that got Israelis to write messages of love and peace to Iranians – will also get them out on the streets to protest against the government’s war plans.

Iranians in the elevator: Getting to know the chosen foe