If Israel’s PM doesn’t show his racist and incompetent Interior Minister the way out immediately – he should face consequences, too. 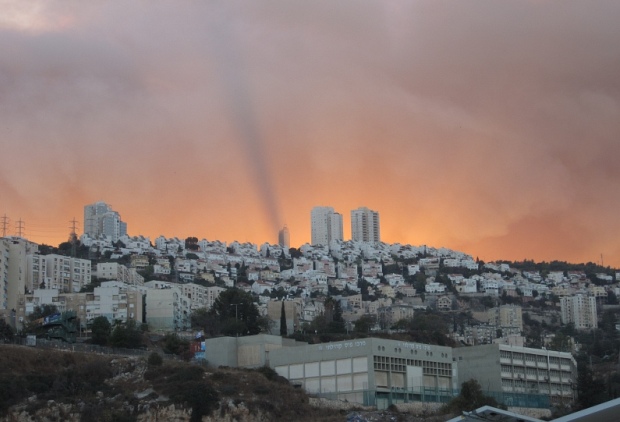 The flames of the Carmel fire seen on the background of the town of Nesher (photo: grebulon/flickr)

Israelis and international forces are still fighting the fire that started yesterday morning on the Carmel Mountain near Haifa. 41 people, most of them from Israel’s prison service, died when their bus was trapped on a forest road. Haifa’s chief of police is in hospital, fighting for her life. This is the biggest and most lethal fire in the country’s history.

The direct responsibility lies with the Ministry of Interior, which is in charge of Israel’s fire services. The fire department has suffered from lack of funding and budget cuts for years. The results were evident yesterday, when the firefighters failed to stop the flames in the first critical hours.

In recent years, there were numerous reports in the press on Israel’s deteriorating fire services. Just a week ago notable environmental journalist Aviv Lavie (Maariv) told the story of fire department officials that are trying to sound the alarm, claiming that they lack the means to battle major bush or city fires. “One day our luck will end, and they [fire department officials] will end up testifying before a national inquiry committee,” Lavie concluded.

By yesterday evening the supply of chemicals used in fighting flames ran out, and the firefighters had to settle for water. Israel issued an urgent request for help to other European countries, but for the casualties and their families it was too late. It seems the inquiry committee will come much sooner than even Lavie expected.

Eli Yishai is the Interior Minister. Yesterday, when PM Netanyahu did the right thing and showed up at the emergency command center in Haifa, Yishai was nowhere to be found. Earlier, he tried to spin the story, blaming the finance ministry for the budget cuts.

I don’t remember Yishai mentioning this issue before. The Ministry of Interior’s main political project last year was a failed effort to have 1,200 foreign workers’ children deported out of Israel, as part of a larger demographic battle against all non-Jews in Israel. He was also very vocal in his insistence on continuing construction in East Jerusalem. Apart from his attempts to sabotage the peace process and his xenophobic initiatives, Yishay didn’t do much.

But Yishay is the easy case. This huge government – the biggest in Israel’s history – has failed miserably on every front. Aside from picking up fights with the international community, introducing embarrassing pieces of legislation and deepening Israel’s hold in the West Bank, this coalition of hawks and racists doesn’t have anything to show for. All they offered the Israeli public was empty Zionist rhetoric – the oldest trick in the incompetent politician’s handbook.

Yesterday they met their Katrina. Yet it’s hard to believe even this disaster will make this government – let alone the man leading it – change its ways.

Read more about the Carmel Forest Fire on +972 Magazine:

The Carmel Disaster: My forest is on fire, by Ami Kaufman

Carmel fire: the price of the treasury’s policy, by Yossi Gurvitz