facebook twitter email link
The weird vibes actually started the day before. Something just didn’t feel right. And then it began. Cellcom, Israel’s largest cell provider, crashed. Totally. For the whole day. 3.5 million users with dead phones. Cellcom also happens to be the supplier of phones to the newspaper I work in – which meant that either reporters kind of had a day off, or if they were responsible enough – found a land line and got in touch. I even talked to a few of them through Facebook. Social media saves the day…

Thursday, around noon – Mom sends me an SMS with an amazing pic she took while doing some errands in Haifa. Message says “fire on the Carmel”. I immediately go onto the news sites, and it’s up. Looks pretty big. There are rumors about injured or dead near the Damon prison, where mostly Palestinians are held.

2pm – Dad calls, they evacuated Haifa University. His office is on the 20th floor of the Eshkol tower. He heads downhill. He stops in a market. The rumors about dead are now fact, and it seems that most of them are prisoners. One person at the market tells my Dad “Oh well, they’re Arabs anyway, they should burn”.

4pm – Turns out it’s a bus of prison guard cadets, over 40 dead. Wish I could see the face of that schmuck in the market.

My dad sends me this pic from their balcony 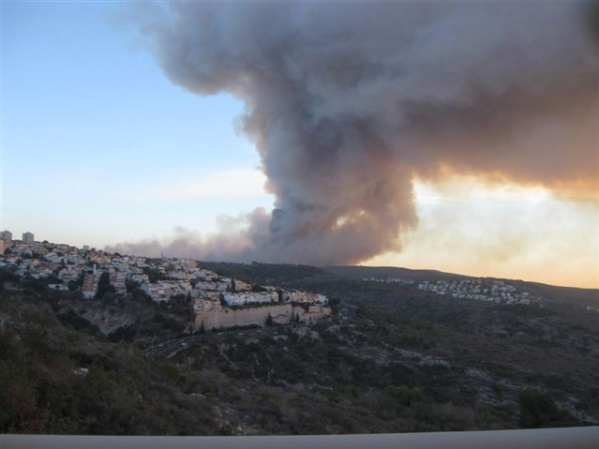 5pm – I read on Yossi Gurvitz’ blog what happened to him in another market somewhere in the center of Israel (my translation):

“This morning at the market, I heard a woman say that we should catch the Arabs who set the fire and burn them just like the 40 cadets who perished in the fire. I butted in. “And what if they’re yeshiva boys?” “What?” “I’m asking, what if the fire was caused by yeshiva boys, just like last time. Would you like to burn them too?” She muttered something and disappeared”.

6pm – As information rolls in, it turns out that most of the cadets who died are probably Druze. In many areas in Israel a sigh of relief is heard. Trust me. (UDATE – As of Saturday, reports switch and say a majority were Jewish)

My dad sends me this pic from their balcony 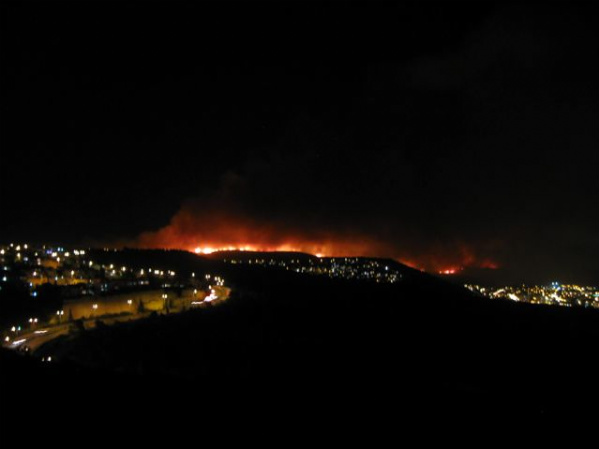 More from the balcony

We finally put the kids to bed, Karen goes off to meet her best friend visiting from the States. I sit in front of the tube, watching my forest go up in flames. I say “my”, and really feel it. A lot of Haifa people feel it. Even though the fire hasn’t reached the city (yet), the Carmel forest is Haifa’s back yard. Almost like our natural Central Park.

I remember countless Saturday mornings and afternoons in the forest with my folks, barbecuing, frisbeeing, just goofing around. You could always find a nice quiet spot and feel like you had the whole place to yourself.

Now it’s all black and charred. I remember the last time there was a big fire, the stench of the burn lasted for weeks, if not months. 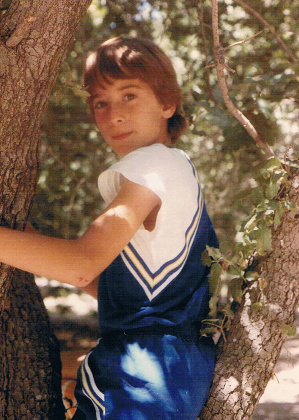 Embarrassing pic from the 80's in the forest 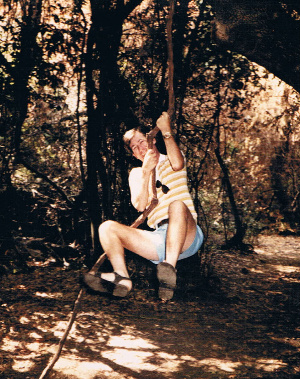 Dad having fun in the forest 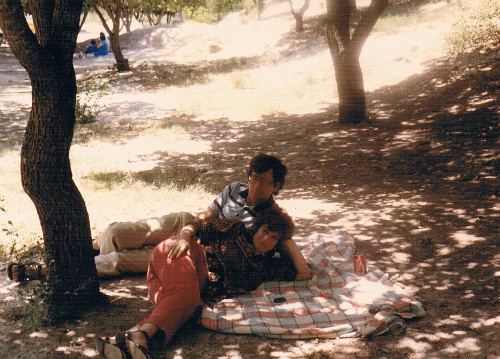 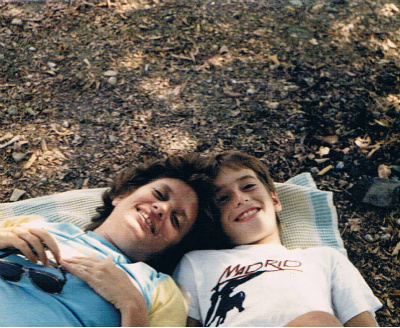 Me n' Mom in the forest

Midnight – I call Dad and tell him to stay alert, even though they’re about to go to bed. The tube says the winds are picking up, and the posh neighborhood of Danya could be in danger.

Friday, 7am – Lea wakes us up exactly at 7. She’s like a Swiss clock. I turn on the tube, it’s still raging. I take the girls for a ride on our bike, down to the sea and through the old city of Jaffa and its port. We sit on a bench overlooking the Med and Tel Aviv’s skyline, watching the choppers go up and down the coast.

1pm – My friend Ada calls me. She’s trying to get her folks in Haifa to come and stay with her for the night in Givatayim. They won’t budge. I tell her we’re going up to Haifa for Hanukkah, she says I’m nuts.

3pm – Dad calls and says the coastal road to Haifa is sometimes closed, sometimes open. I should pay attention before I head out, he recommends.

5pm – We head out to Haifa with the kids. All the stations have the “disc pigua” on. Disc pigua literally means “Terror attack disc”. It’s the term for what all the stations put on when there’s a terror attack and many killed, or any other disaster. Slow music, few BPM’s nothing too loud. We’re mourning. Just like the sirens on the memorial days where we stand silent, the disc pigua simultaneously makes me feel proud of Israel, and scared shitless of the  power it has over its people.

5:45 pm – We reach Atlit, 15km south of Haifa. It’s already very dark. We don’t see any flames, but a large dark cloud is visible. And the we smell it, even though the windows and vents are shut. Car smells like smoke till we reach Haifa.

UPDATE, Saturday 1pm – Reports now say that most of the passengers on the bus were Jews. My criticism for Cohen’s remarks still stands.

6:30 pm – We get to my folks. We light our Hannukiah. It’s a special one, given to us by my grandfather. His family perished in the Holocaust, he was one of the only ones to leave the farm outside Bratislava. Before the Nazis came they buried the Hanukia in the back yard. After the war, Poppy went back and dug it out of there. Now it stands proud, a beautiful piece of Judaica, and we light it with olive oil and floating wicks.

9pm – On the way back. The Atlit junction is much more smokey, the wind has really picked up. And then we see the flames. They’re huge. The whole side of the mountain is orange, glowing in the dark. Dozens of cars stop on the side of the highway to gaze at the spectacle. I just try not to hit anyone, while I glance to the left myself at the awesome sight.

One of my favorite Mati Caspi songs is on the disc pigua, it’s his duet with the amazing Riki Gal. This song always manages to get a lump in my throat. Dedicated to those young cadets:

On the radio there are reports saying the fire may have started in the Druze town of Usefiya. Great. So now, not only will they start blaming the Arabs for it, they’ll say it’s poetic justice that most of the cadets were Druze (UPDATE – reports now say a majority of the passengers were Jewish) .

11pm – Reports about Druze from Usefiya arrested for arson.

Things that warm my heart

Jordanian firefighters come to the rescue. Even the Turks are helping out. The Russians brought a huge plane, everybody is hoping it’ll hose everything down fast. The Greek are helping out, too, which is kind of funny that it’s happening on Hannukah, when you think about it.

All over the country people are opening their homes to the thousand who have been evacuated, and the volunteer groups are telling people to stop coming – they already have too many. I know, I know, it’s kitschy, people all over the world come together during disasters, but I don’t care – bite me. It’s cool.

And to top it off, the news flash says that Palestinian PM Salam Fayyad has offered fire trucks from the Palestinian Authority. The next news item is that Hamas shot some rockets to the Negev. If you ever needed any proof of how fucked up this place is – there you got it.

Carmel fire: The price of the treasury’s policy, by Yossi Gurvitz