The High Court of Justice declines to make a ruling on the evictions of over 1,000 Palestinian villagers from what Israel calls ‘Firing Zone 918.’ Villagers’ attorneys say referral to mediation process is a sign the court wasn’t satisfied with the state’s arguments. International writers sign petition against evictions. 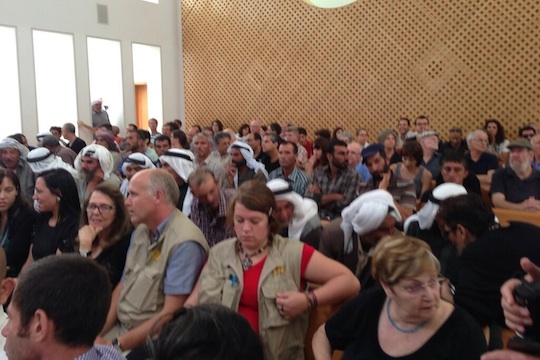 Palestinian residents of the South Hebron Hills, supporters and observers at the High Court of Justice for a hearing on Firing Zone 918, September 2, 2013. (Photo: Irene Nasser)

Israel’s High Court of Justice referred to mediation a petition against the eviction of dozens of West Bank Palestinian families to make room for a military training area in the West Bank on Monday, pending the State’s acquiescence to the suggestion.

The courtroom was packed with representatives of the Palestinian villagers, foreign diplomats, Israeli and international activists and journalists.

Some 1,000 Palestinians in eight villages live in what the Israeli army has declared Firing Zone 918 in the South Hebron Hills. For 14 years, the state has years sought to evict the traditionally cave-dwelling Palestinians from their homes and grazing lands inside the designated area. A number of Jewish settlements within Firing Zone 918, however, have not been served with eviction orders.

In the High Court hearing on Monday, the state argued that Firing Zone 918 is of military necessity because it reduces logistical costs of training exercises due to its proximity to a nearby army base. 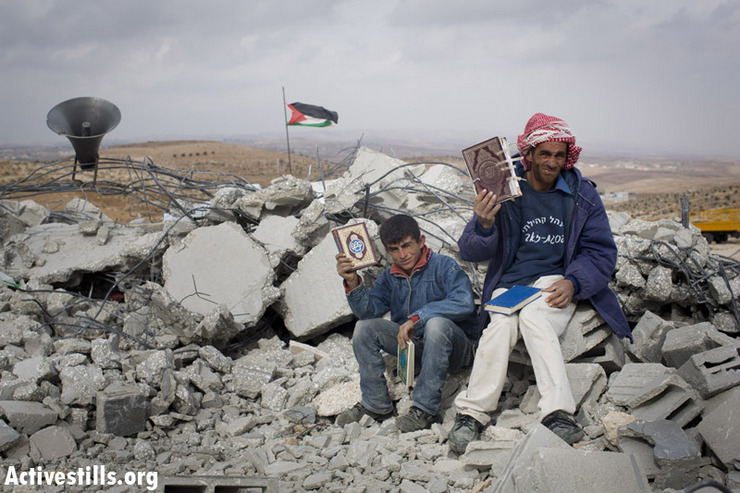 Fadel Hammadi and his son, Abed, hold copies of the Koran as they sit on top of a mosque that was demolished by Israeli forces in the West Bank village of al-Mufaqara, south of Hebron, on December 4, 2012. The village is located inside what the Israeli army has designated ‘Firing Zone 918’. (photo by: Oren Ziv/ Activestills.org)

Following the hearing, Attorney Sholomo Lecker said he believes the court referred the case to mediation because it did not want to make a decision, but rather to signal to the state that it should change its position.

The referral to mediation would not be the first attempt to resolve the issue of Firing Zone 918 out of court. In 2002, villagers and the State entered a previous round of mediation, in which it sought to relocate the Palestinian residents to a smaller, nearby area. Residents refused, however, and in 2005 the process ended without any result.

Ahead of the most recent court cases, filed by the Association for Civil Rights in Israel and Atty Sholomo Lecker on behalf of the villagers, a group of well known Israel authors signed a petition opposing the eviction of Palestinians from the South Hebron Hills.

“In a reality of ongoing occupation, of solid cynicism and meanness, each and every one of us bears the moral obligation to try and relieve the suffering, do something to bend back the occupation’s giant, cruel hand,” they wrote.

Ahead of the Monday’s hearing, 50 international authors joined their petition, calling on Israel “to halt its displacement of the Palestinian villages located in Firing Zone 918.”

The full list of authors and the petition text can be found below: