The discourse around the Nakba law–which tries to stop public institutions from marking the Palestinian disaster, through funding cuts–feeds Israel’s persecution complex. Trying to legislate history out of existence means losing touch with reality 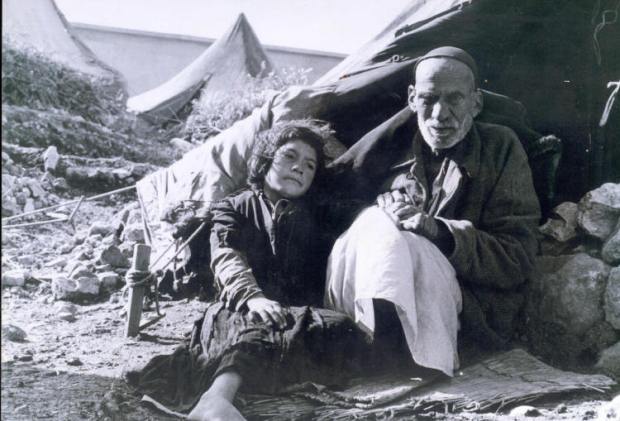 A Palestinian man and a girl in a refugee camp, 1948 (photo via Wikimedia, license CC)

Years ago, I commented to someone that after twenty years of occupation, Israel should not have been entirely surprised by the outbreak of the first Intifada in 1987. My interlocutor, an Israeli with a security and intelligence background, accused me of a broad spectrum of cognitive failings before I stood up and walked out.  Then just a few days ago, a senior Israeli government official said (I’m paraphrasing an unofficial conversation), “why are we always surprised when something dramatic happens? And then next time it happens – we’re surprised all over again.”

Perhaps we are surprised because the best minds of our generation are buried in minutia, and avoiding the big picture at all costs. Micro-policy in Israel is more popular than micro-chips. It’s the Goldstone report, not the Gaza policy that counts; it’s the two-month settlement freeze, not the two-state solution that counts. We have a great macro economy but no macro analysis. Failing to read the big picture leads to big failures.

When the Nakba Law passed , some argued that the actual, “softened” text is really not so bad – or even that it’s great. The law does not ban observation of the Nakba – the experience of the Palestinian people of Israel during the war of Independence. It merely allows (doesn’t require) fines (not full funding cuts) for public institutions (not private) that teach the Nakba. Anyone who wants to commemorate the Nakba privately on Independence Day is welcome to do so. How much will really change? (Note that the same argument is applied to the equally dangerous “admission committee” law, which – according to the letter – bars discrimination based on race and ethnicity, but in practice, legitimizes this very discrimination through legal protection.)

Sometimes the devil is not in the details.

In the big picture, Israel is laying the emotional groundwork for ethnic conflict.

Palestinian citizens of Israel feel every shot fired at them, literally and symbolically, by the state of Israel. With Jewish-Arab relations in a free fall, this bill communicates to them: “The state rejects you and will deny your history however possible.” If there was any doubt, the discourse from the hate-spewing Israel Beitenu surrounding the law, quoted in Ynet, makes it very clear:

Yisrael Beiteinu MK David Rotem explained in a speech before the plenum that “when we are at war against a harsh enemy, we will legislate laws that will prevent him from hurting us.”

It is heart-wrenching to know that our national representatives sat there and let Rotem describe 20% of the Israeli citizenry as a “harsh enemy.”

Likewise, when ultra-nationalist civil society group Im Tirtzu prints pamphlets that read as if they were written by frat jocks on steroids, writing that the entire aim of the Nakba is “a pack of lies…to justify the struggle to destroy Israel,” one simply has to doubt their intellectual sincerity (and faculties). The screaming, hysterical – but naked – text (apologies to Ginsberg, again) also informs us that the Nakba exists to destroy the international recognition of the State of Israel’s right to exist, and to convict Israel for crimes it didn’t commit. All this before launching into a long lamentation of Arab violence against Jews.  If Arabs in Israel hear, over and over, that they are seeking the final destruction of Israel, they might eventually begin to believe it – and no one should be surprised. However, I credit them that they will not be mindlessly manipulated.

In the big picture, the debate surrounding this law has spawned hate-mongering and low-intelligence provocation.

Such accusations have a tendency to go reciprocal, contributing to what Stuart Kaufman, a scholar of ethnic conflict calls a “security dilemma,” in which each side perceives the other as an existential threat and therefore each side’s security policy must cause insecurity to the other. In the 1980s, Serbian nationalist Dobrica Cosic’s writings about Albanian conspiracies against Serbs in the 1980s, ratcheted up Serb nationalism that stoked one of the bloodiest wars in post-war Europe. Former Balkan International Crisis Group director Christopher Bennett said that Cosic’s writings were:

Every conceivable event from Serb history was dredged up and distorted to feed the persecution complex of ordinary people…The atmosphere was so heated and the campaign so all-encompassing that people lost touch with reality.

Im Tirzu’s rantings are of the same ilk. In the bigger picture, the discourse around the Nakba law feeds Israel’s persecution complex. Trying to legislate history out of existence means losing touch with reality. Israel already fantasizes that it can cling to the status quo regarding the conflict and do nothing. This law builds an internal national fantasy that we can excise the reality of one-fifth of our citizenry and the seminal events of our country. The precedent of legislating away history is awful: why not deny Dir Yassin or Kfar Kassem next? And if that happens, why not just strike the law of refusing illegal orders, a legislative symbol of combat morality, as well?

In the bigger picture of Israeli democracy, the Nakba law is one more limitation on free thought, speech, and action, as many have already observed. Instead of reading laws through blinders and then deciding they’re really not so anti-democratic, we should recall that the earlier version called for full criminalization of commemorating the Nakba, including a three-year prison sentence as punishment (Hebrew).

So if democratic values continue to erode, we shouldn’t be surprised.

And yet, none of this is inevitable. The cycle can still be stopped, and it’s upon us, the citizens, to put all our resources into shifting course, since the government is too blind to see the big picture. Here’s are some suggestions:

1. National Nakba Learning Day: All citizens, institutions and public or private schools who care to preserve both democracy and ethnic relations can undertake a day of learning our shared history. Jewish Israelis will benefit by acknowledging our history and letting it form part of their conscience. Palestinians will benefit by knowing that they have partners in Israeli society who seek mutual respect and understanding –and value the truth.

Democracy values whole truths, not half or one-sided. If the country undertakes a nationally organized Nakba teach-in, the material can be developed by experts from all communities, to produce the most comprehensive possible narrative in which neither Jews nor Palestinians have exclusive claim to the dubious privilege of being victims.

2. Civil Disobedience: National Nakba Learning Day can be observed on Independence Day, to protest a law that is totally inappropriate for a healthy democracy. Breaking such a law constitutes no clear and present threat to anyone – this is far less thorny disobedience than refusing a military order. Do it.

3. It is worth noting that democracy should celebrate painful truths, but not pain for its own sake. That’s why free speech does not cover incitement to violence, for example. On this point, the Nakba law legitimately seeks to curtail speech supporting terror activities, and incitement to racial or ethnic hatred. If these are stripped of national or ethnic connotations, applied equally to every single citizen, de-linked from the Nakba, and the name of the bill is changed – let the bill remain as a tribute to the value of free and civil discourse among all the people of Israel.

Otherwise, I fear, the Nakba (Law) will take its revenge.