Israeli consumers don’t want to know what’s happening on the other side, the station’s foreign editor explains. ‘We don’t serve the regime, we serve the consumerist regime.’ 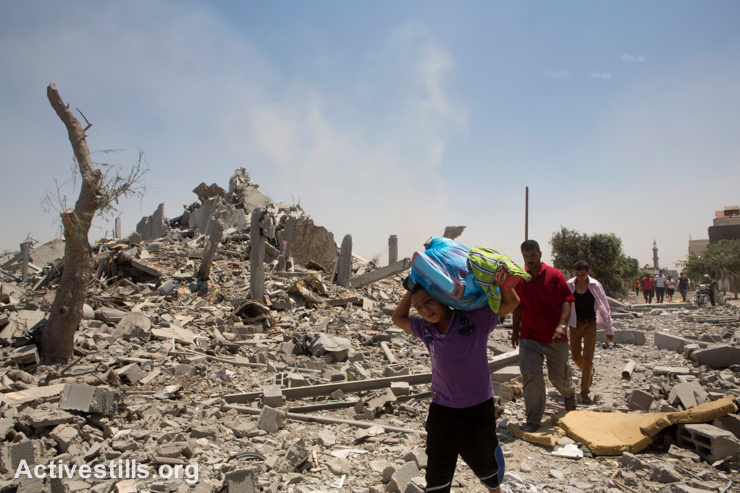 Palestinian children carry goods salvaged from the Gazan village of Khuza’a, which underwent of intense attacks and was largely destroyed during the Israeli offensive, Operation Protective Edge. (Photo by Activestills.org)

During this summer’s Gaza war officials in the Prime Minister’s Office and Defense Ministry contacted Israel’s Channel 2 News, asking why they were not broadcasting more images of destruction caused by the army’s bombing in Gaza.

Speaking at a panel discussion at Netanya College last week, Arad Nir, the company’s foreign news editor, said the news channel did not comply with the government’s request, instead decided to show what its viewers demanded.

The panel, which also included journalists Dror Feuer, Prof. Motti Neiger and Attoney El-Ad Mann, dealt with freedom of speech in Israel and the Israeli media’s coverage of Protective Edge.

“The Israeli media allows itself to be controlled by its consumers — it does this of its own volition,” said Nir.

“My personal, in-house claim is that if we provide our audience with a different type of journalism, even in certain doses, if we make it good enough and interesting enough — the public will know how to handle it,” he continued. “The media here has a kind of patronizing and arrogant attitude toward the public.”

Nir also spoke about the differences between the Israeli media’s coverage of the war as opposed to global media coverage.

“I have some news for you,” Nir went on. “Even the decision makers in Israel […] wanted us to show what was happening on the other side — they were under the impression that the public doesn’t understand how much they were doing or how hard they were hitting the other side. So they complained to us.”

“I know for a fact that there were phone calls by the Prime Minister’s Office and the Defense Ministry in which they asked us: “Why aren’t you showing what’s happening on the other side?” he detailed.

“During all the wars we covered on Channel 2 News, during our post-mortem meetings there were many times that we made a mea culpa and admitted that perhaps the public’s feelings of bitterness in the wake of the war were because we did not show what was happening on the other side,” he admitted. “That is, we didn’t show the public the blood spilled in its name on the other side. Not because someone cared about what was happening there, not because someone thinks that this isn’t the way to behave, that we must think differently. Rather the opposite – because this is the way, because this is what we must do. But we didn’t show that.”

At a different point in the discussion at Netanya College, Nir admitted that the “reign of the consumer,” as he terms it, causes Channel 2 News to not only shape its content to the will of the people, but also the identity of its presenteres. Responding to a question by Mann regarding the make-up of Friday night’s highly-rated, primetime “Ulpan Shishi” news show, Nir responded: “Friday’s panel is influenced by Saturday morning’s ratings — unequivocally.”

More on the Israeli media’s war coverage:
For the Israeli media, Gazan lives are little more than expendable
Dispatch from Gaza: Why Palestinians should speak to Israeli media
Gaza deaths aren’t worth a mention in leading Israeli newspaper