facebook twitter email link
The Israeli army will be collaborating with the Chinese, and Izzie wants in on it
Bzzzzzz!
Izzie: What is it Ruthie.

Izzie: Right, I almost forgot about that one. Thanks Ruthie, send him in.

Izzie: Jesus Avi, I thought I told you to cut down on the burekas. You look like crap.

Izzie: Good. Look, yesterday I caught this item about you guys collaborating with the Chinese army.

Izzie: It could be the People’s Liberace Army, for all I care. Don’t piss me off this early, Avi, it’s only 9 o’clock.

Izzie: So, when does this collaboration start?

Benayahu: Tomorrow morning, they just landed today. I’ll be doing the introductory workshop, and the PLA spokesperson will be attending, General Huang Xueping.

Izzie: – Avi, shut up. Seriously. He can shop for whatever he wants to. Take him to Azrieli, maybe they have those wang things. Just make sure you make these guys happy. Now get out of here. I’ll see you tomorrow. 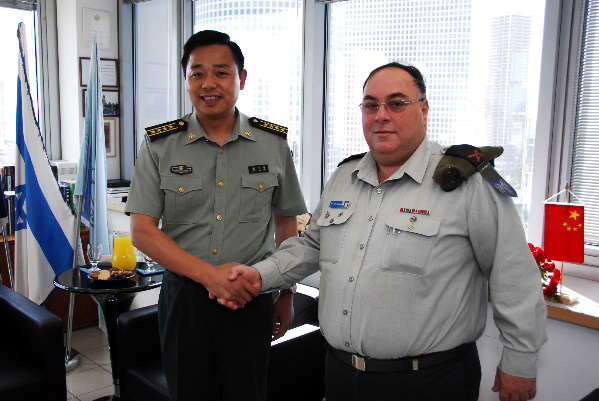 Next morning, at the Kirya in Tel Aviv. Izzie walks in, 20 minutes late.

Benayahu: General Huang, allow me to introduce you to our leader, Ms. Israel HolyLand. Ms HolyLand, this is the PLA spokesperson, General Huang Xueping.

Benayahu: Mam, what are you doing?

Izzie: I thought they switched their L’s and R’s. You know, liver and river and all those jokes.

Izzie: Fucking Wikipedia. Spent the whole night practising that one. Just get this thing started already, and remember – these guys better be happy.

Benayahu turns to the class of Chinese soldiers

Benayahu: OK guys, listen up. Today I’ll be talking to you about some of the stuff we’ve gained a lot of experience in, such as public legitimacy and spokesmanship in urban combat situations and in public diplomacy.

The first thing you have to remember is that the media is weaker than you. Once you understand they need you for all their info, you’ve basically got them wrapped around your hands.

Izzie likes hearing this. She notices the General smiling, too. “I’m gonna get this guy the best Sushi he’s ever had”, she thinks to herself, “better than the stuff he gets back home”

Benayahu: Now, in China things are a bit more complicated. You guys, how shall I put, go the extra mile, if you know what I mean, hehe…

Benayahu wasn’t expecting this. He glances at Izzie, who tenses up immediately

Benayahu: Well, you know what I mean. Not that I’m saying it’s true, you know, but all those atrocities they claim you do in Tibet after you conquered them.

Benayahu starts to sweat. He could really go for a shawarma now

Benayahu: Yeah, I guess you got me with that one, hehe. But, let’s take the Falun Gong, for example.

General Huang: You mean, persecution based on religion? Funny, I thought I read something this morning about a new segregation bill that wouldn’t work out too well for Arabs…

Benayahu feels his heart racing. His ulcer is picking up, too. Izzie looks like she’s about to go balistic on him. Suddenly, she jumps out of her chair and points her finger at General Huang

Izzie: Oh yeah?!?! Well what about Tiananmen Square?!! Huh? What about that!!! At least we don’t kill our own civilians!!

General Huang looks at her calmly

Now, if you don’t mind, we’d like to continue the workshop.