With the growing number of calls for J14 to address the “elephant in the room” that apparently no one is willing to talk about – the occupation (shhh!), it’s important to understand something: there is no elephant 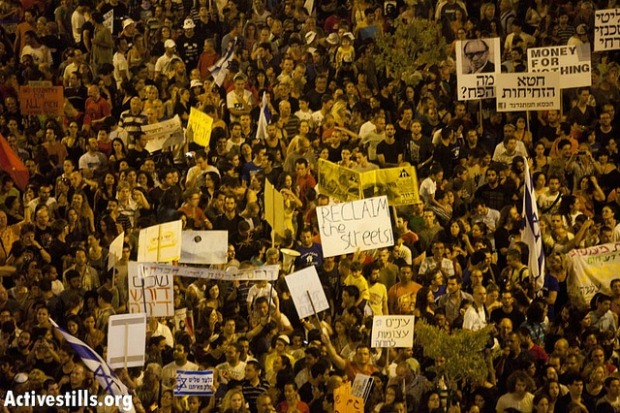 Lately there have been calls on the Left, including here on +972, for the #J14 movement to talk about the elephant in the tent: the occupation.

Allow me to begin with the latter. What is J14 about? Well, the symbolic slogan of this movement is “the people demand social justice.” This slogan also serves as the trigger for those calls from the Left: “Well, how can you talk about social justice when there is no justice for Palestinians?”

Although the protesters are demanding “social justice,” what they’re really asking for is “more money!” – as painful as that may sound. What they’re really shouting is, “Hey! How about a little less capitalism, and a tad more socialism!” Let’s not forget what triggered these demos: Daphne Leef couldn’t afford her rent and set up a Facebook page. It doesn’t get more financial than that.

This revolution is all about money. Sure, there are also elements of “justice” in it (better education for all, health services for all, better taxation, the end of rampant privatization and more) – but the engine of this movement is the realization of people that the system is screwing them. The system gives too much to the rich, and less to them. They are what Guy Rolnik of Haaretz calls “the unconnected”:

“We called them unconnected because they had nearly no chance of ever connecting to the nodes of power and the center of the discourse. The tent protest is the first time this many of the unconnected have woken up, united and decided to speak out. They suddenly realized that their life – their economic and social future – has been obscured by the security smokescreen and the dispute between right and left, religious and secular. They realized the “start-up nation” story of high-tech creating social mobility and growth is important – but relevant to only a small group.”

I couldn’t be more proud to say that Israelis are now at the forefront of one of the most important battles being waged around the globe. It’s the battle of those “unconnected” against “capitalism gone wild”. Let’s be clear – the occupation is a crime, but “capitalism gone wild”, led by Wall St., by the humongous, uber-powerful international corporations and by Western states is just as big a crime that has caused death and extreme poverty across so many nations and continents, it dwarfs the death and destruction wrought by the Is\Pal conflict.

Show me another nation that has put 5% of its population on the streets for this battle. Go on, show me.

Israelis are fighting a dictator no less ruthless, no less sly than Hosni Mubarak or Bashar Assad or Muammar Gaddafi. The dictator they fight is the silent system of ruthless capitalism, a system that is all numbers and figures and toxic assets hovering somewhere in an unreachable sphere right above their heads. They don’t understand it, because it’s just too complicated. Only a select few do. We can’t. We’re unconnected.

But we’re not only “the unconnected”, as Rolnik calls us. We’re also the “indignados” of Spain marching towards Brussels as we speak. We’re also the Greeks rioting against their government’s failures. We are also the “hooligans” of London – yes, there’s a reason why they’re out there (I’m not justifying rioting, but come on – read into it a bit. They’ve been unconnected for decades). And we are the Americans, whose disgust from Wall St. put Barack Obama in the White House, and we are the amazing Americans who finally got off their back sides in Madison, Wisconsin and took over their state capital half a year ago.

This thing is about money, about wealth distribution, about “capitalism gone wild”.

It’s the capitalism that all of us began to finally understand after the crash in 2008. It’s the “economic awareness” that the world has been developing, and which is developing very, very fast in Israel. Israel used to have one financial daily, Globes, and now there are three, with The Marker and Calcalist. Not to mention the countless economic shows and consumer shows on prime time TV. Israelis today see with much more ease where all this wealth goes to. We look at the skies to see that promised “trickle down economy” – but the rain drops seems to stay up there in the clouds.

As renowned economist Professor Nouriel Rubini, also know as “Dr. Doom”, told the Wall Street Journal [Heb] yesterday, there is a line connecting all this:

“We are witnessing mass demonstrations in developed economies such as Israel, where a rise in housing prices and inflation have caused discontent for the middle class. The same is happening in Britain. People who are poor and desperate, whether they are in Britain or Egypt, tend to take part in riots.”

Yet there are those who have the audacity to reprimand us for wanting a piece of the pie. To those people, who have a problem with some of the protesters who continue to drink in cafes and eat sushi, who chastise us for selfishly wanting to improve our materialistic conditions, I say: Please, don’t be so patronizing. What exactly did you expect, after brainwashing us for decades with your sitcoms, your soap operas, your cooking shows, your commercials, after you taught us that if we worked hard enough we’d be rich one day and live in a McMansion in suburbia? That we won’t want to eat sushi? That we shouldn’t long for a McMansion? Wait, we have to become long haired hippies now? You were just teasing us? Showing us the candy and then chucking it away?

Not only is this thing about money – it’s about finally understanding that we’ve been taken for a ride. Which also makes this about dignity. The dignity of all of us, who have been fooled for way too long.

4. Not out of love for Mordechai

So, now that we’ve settled the first misunderstanding, let’s get to the core of this rant – the misunderstanding of Israeli society, and why the occupation does not have to be addressed by J14.

Don’t get me wrong – the occupation could end as a result of this revolution, but as a by-product. Inshallah! It could actually end because Israelis will say “more to education, less to settlements, more to health, less to Haredim.” But that wouldn’t be because they care about Palestinians. Or their rights. Or their justice. In a way, the occupation could end, as we say in Israel, “not out of love for Mordechai but out of hatred for Haman”. Haman being “capitalism gone wild”.

Honestly, wake up. It won’t end because Israelis suddenly care about Palestinian rights and think we should talk about it on Rothschild boulevard! Ha! Don’t make me laugh. As if Israelis could care any less about Palestinians than they have over the last 45 years of occupation. You honestly think that Israelis, just because they’re chanting “social justice,” will suddenly give a damn? “Naive” is an understatement.

5. J14 as a mirror of Israeli society

The chances of Israelis beginning to give a hoot about Palestinians diminishes as the weeks go by. As these protests become more widespread, as more of Israeli society takes part in them, they become more and more a mirror of what Israeli society is today – which is a society that has chosen Benjamin Netanyahu as their prime minister, a society that is content with the most right wing, racist Knesset in Israeli history. So really, what are the odds of the occupation turning into a topic at the tents in Afula, Bet Shemesh, Kiryat Shmona and Netanya? Zilch, my friends. Zero.

One has to understand – there is no elephant in the room. Actually, there is an elephant – but he’s invisible, across the fence, across the Green Line. Israelis like it that way. It’s not that people are scared to whisper the word “occupation”. They’re fully aware of it’s existence, and they’re OK with it. (In fact, if there is an elephant in the room it’s probably Karl Marx, who people are afraid to say was right about many things. But you didn’t hear that from me…)

“For years, security and the Israeli-Palestinian conflict have pushed economic and social hardship into a secondary place. Although there’s a very close connection between these two issues, they don’t connect in the minds of most of Jewish society. Not only do people not feel any dissonance about it, they are even angry when their personal hardships are linked to issues of peace and security.”

So, to simplify the way an Israeli brain works: J14 = economy; Occupation = security. For Israelis the difference could not be greater. It’s apples and oranges. You don’t mix the two. You can’t. And why should they? That would be like asking demonstrators against Roe v. Wade on Capitol Hill to address the wars in Iraq and Afghanistan.

Even the Arab speakers at the various demonstrations, from what I’ve heard (I may have missed some), have not directly addressed the occupation either – or even utter the word. Rather, they point out how they, too, are victims of capitalism and that they have it even tougher because of Israeli policies, of how the wealth is distributed. But the focus is still on money, on how the system screws everybody – equally.

I am in awe of these protests, confronting what is in my eyes the most important battle being waged today around the world. Sure, it’s fine to critique this revolution. But give it a chance, for Christ’s sake. Taking on a huge demon like “capitalism gone wild” will take more than a few weeks. Why is it that I keep getting that feeling, that a lot of people will never give Israelis the credit they should get where deserved? It’s taking the “damned if you do, damned if you don’t” to extremes.

Besides the global battle, Israelis – Jews and Arabs together – are now in the midst of one of the most difficult battles ever waged here in Israel: pushing those economic and social hardships into first place in the Israeli political discourse. Putting security second. I can’t wait for the days when Israel will be a “normal” country where right and left are divided over socio-economic issues, and not ridiculous claims of who owns a centimeter of land. I can’t wait for the days when people care more about money than about holy sites.

So, I’m sorry if we’re not talking about the occupation. The occupation is an ugly crime, and it is turning Israel into an apartheid state.

But I’m hopeful that the battle chosen now by Israelis could eventually even win the “battle not taken”, by suffocating the occupation it of its funds.

And above all, I’m very proud that we Israelis have the guts to stand up and take part in one of the biggest battles around.