Khalida Jarrar, who was arrested for representing the Popular Front for the Liberation of Palestine in the Palestinian legislature, rejects all charges against her as trial opens in West Bank military court.

Palestinian lawmaker Khalida Jarrar, who was arrested in March and has been imprisoned ever since, plead innocent Monday as her highly-publicized trial began in the Ofer military court in the West Bank. The trial was attended by Jarrar’s family members, a number of journalists, as well as a delegation of EU diplomats who expressed their concern over her detention.

Jarrar, who serves in the Palestinian Legislative Council (PLC) on behalf of the Popular Front for the Liberation of Palestine (PFLP) has been charged with 12 counts relating to her membership in the party, which is defined by Israel as an illegal organization. Nearly all the charges have to do with Jarrar’s participation in demonstrations, interviews, speeches and visits to solidarity tents for Palestinian prisoners. Only one charge relates to incitement to kidnap Israeli soldiers, despite the fact that the witness to this charge admit that he is not sure he heard Jarrar say anything to that extent.

Jarrar’s attorneys, Mahmoud Hassan and Sahar Francis from Addameer, a Palestinian NGO that works to support Palestinian prisoners, rejected all the charges and declared that she would plead innocence on all counts. The military prosecutor, Captain Almaz Ayso, stated that the prosecution would hand over classified material to the court, which the defense will not be able to see or challenge.

Jarrar’s attorneys asked that the computers that were confiscated from Jarrar’s home near Ramallah during an army raid in March — during which she was arrested — be returned to her should no incriminating evidence be found. Ayso said that they would receive in answer in the coming days.

The short hearing ended after Hassan and Francis announced that they would file their pre-trial motions in the next few weeks, which will be followed by the presentation of evidence sometime in July. Jarrar will remain in prison during this time, after the military appeals court upheld a request to keep her in custody until the end of legal proceedings. In April she was placed in administrative detention, which means she was to be indefinitely detained without being sentenced or facing trial, but was later sentenced in the wake of a global campaign to release her.

Read: 12 Palestinian members of parliament are in Israeli prison

Before the hearing began, a prison service official allowed Jarrar to hug her two daughters, Yaffa and Suha, who came for a visit from Canada, where they are studying. Family members are generally forbidden to speak with Palestinian prisoners during the proceedings — and certainly not touch them — and are not allowed to sit in the front rows of the court room. Perhaps the presence of journalists and diplomats affected the behavior of the members of the prison service. 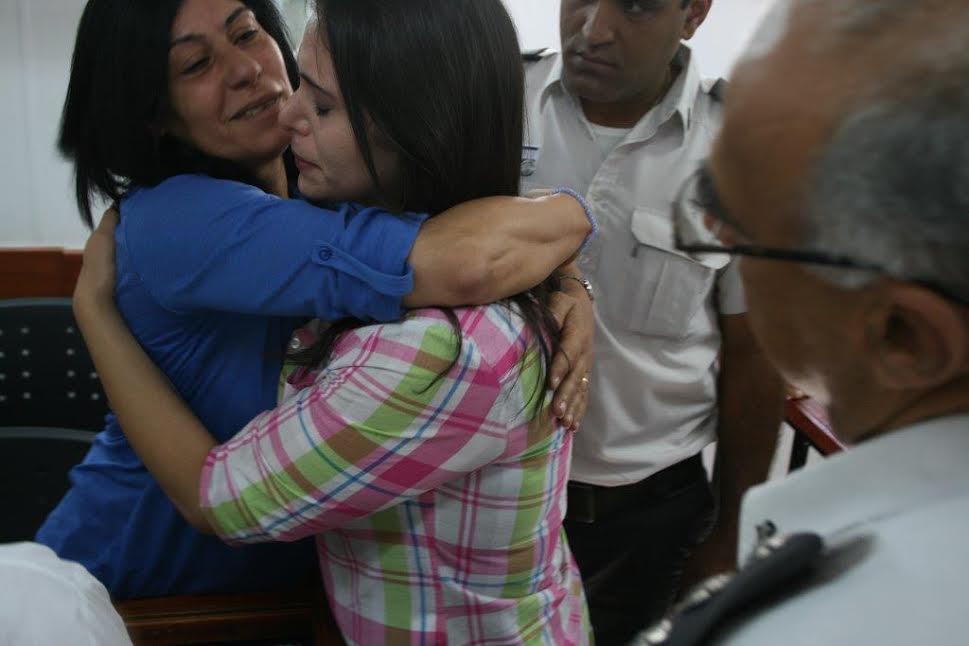 At the end of the hearing, Jarrar’s daughters thanked the crowd for their support, saying that they are leading an international campaign for her release, which has won the support of parliamentarians and diplomats across the world. Knesset Member Aida Touma-Suleiman has also called for Jarrar’s release.

Beyond her position as a member of the PLC, Jarrar has been a left-wing, feminist activist for many years, and has been active on issues of political prisoners in Israeli jails. Last year she was involved in the Palestinian Authority’s bid to the International Criminal Court over allegations of Israeli war crimes against Palestinians. Furthermore, Jarrar has not shied from criticizing the PA for its continued security cooperation with Israel.

Jarrar’s close friends believe that her criticism of the PA as well as the ICC bid are at the root of her expulsion order from Ramallah to Jericho last August, as well as her arrest in March, since several of the charges against her relate to events that occurred several years ago.

Jarrar is one of 12 members of the Palestinian Legislative Council who are currently being held in Israeli prisons. Several of them, including Hamas member Aziz Duwaik, are in administrative detention, which means they are being held indefinitely without being sentenced.