The largest Arab-Jewish educational institution in Israel has been targeted several times in the past. 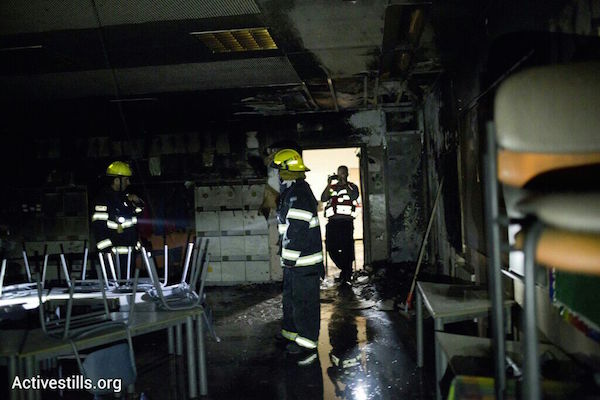 Jerusalem’s bilingual Arab-Jewish school was set on fire Saturday night, and hate speech was sprayed on its walls with the messages: “Kahane was right” and “There is no coexistence with cancer.” One classroom was totally consumed while another was partially burned, as well as a stack of books.

Read also: ‘We will overcome’: Arson and mourning at J’lem bilingual school

Most schools in Israel serve Jews or Arabs separately, in addition to separation between secular and religious students. Mixed schools are the exception and there are only a small number of them, most of which are private. Graffiti sprayed on Jerusalem’s bilingual school reads: “There is no coexistence with a cancer.” (photo: Jerusalem Firefighters) 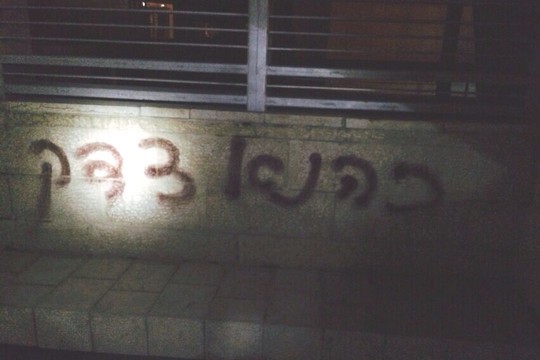 The Max Rayne Hand in Hand school, which serves 624 Palestinian and Jewish students from East and West Jerusalem, pre-kindergarten to 12th grade, is the largest Arab-Jewish cultural institution in Israel. It has been the target of several hate crimes in recent months, including during the summer’s Gaza War. Students responded at the time by writing “Partnership; Love; Fraternity” on their walls.

Parents of students at the school gathered there Saturday night to set up alternative spaces for the classrooms damaged and hung up signs like, “Jews and Arabs refuse to be enemies,” which will greet the kids when they arrive at school tomorrow morning. A rally in support of the kids and the staff will be held at 8 a.m. at the entrance to the school.

Shuli Dichter, director of Hand in Hand, which operates five such bilingual schools in Israel, said in a statement:

This is not the first act of aggression against the school and our commitment to civil partnership. Even if it succeed in dirtying our walls, it cannot destroy our enterprise. In addition to sharply condemning the act and showing support, we invite the public in Israel to join us in building civil partnership between Arabs and Jews in Israel.

This is a violent, heinous, criminal act aimed at damaging the foundations of Israeli democracy. The fact that this was an arson attack on an educational institution that raises the banner of coexistence constitutes a severe blow to the relationship between Arabs and Jews. It is especially grave considering they chose to hurt the underbelly of Israeli society: A nursery school where young, innocent kids study. I call on the Israel Police to act immediately to bring these criminals to justice.