I have recently reported on a few instances in which two Jewish anti-miscegenation groups  – Lehava and Yad L’Achim – have been actively operating to thwart contact between Jews and Arabs. Lehava, which runs a hotline encouraging callers to inform on Jewish-Arab couples, was reportedly behind a campaign to pressure Israel’s National Service Administration to stop allowing Israeli Jewish females to work night shifts in hospitals – presumably to make it more difficult for them to socialize with the Palestinian citizens of Israel with whom they work.

Yad L’Achim – whose mission is to fight “assimilation” (read: miscegenation) and whose slogan is, “We don’t give up on a single Jew” – claims to collect the identification cards of Jewish women seen socializing with Palestinians.

Both these organizations have posters circulating on the streets and in social media that are racist, sexist and offensive. Here is a flyer by Lehava spotted in Jerusalem that says in Hebrew and Arabic: “Don’t even dare to think about a Jewish woman!” 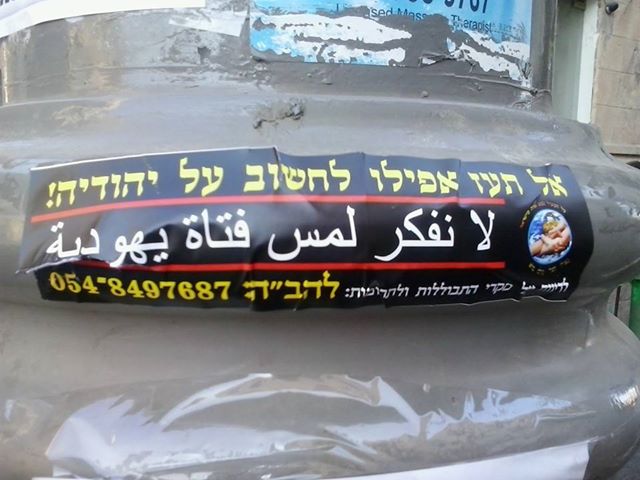 ‘Don’t even dare to think about a Jewish woman!’ -Lehava poster in Jerusalem (Courtesy, T.F.)

Yad L’Achim has a poster going around social media that reads: “In a relationship with citizen belonging to an ethnic minority?” And below that: “You know it’s not it, but having fun in the meantime? Don’t waste your time! You are wasting the most beautiful years. Your life is not a game! Turn to Yad L’Achim’s 24-hour hotline now.” Yad L’Achim poster: ‘In a relationship with citizen belonging to an ethnic minority?’

The barcode in this flyer takes you to a video produced by Yad L’Achim which shows a Jewish Israeli woman telling other women about the dangers of dating an “Arab” – how they are obsessive, and take over your life, and she implies that all Arab men abuse Jewish women verbally and physically. The last message of the video is: “You deserve one of us.”