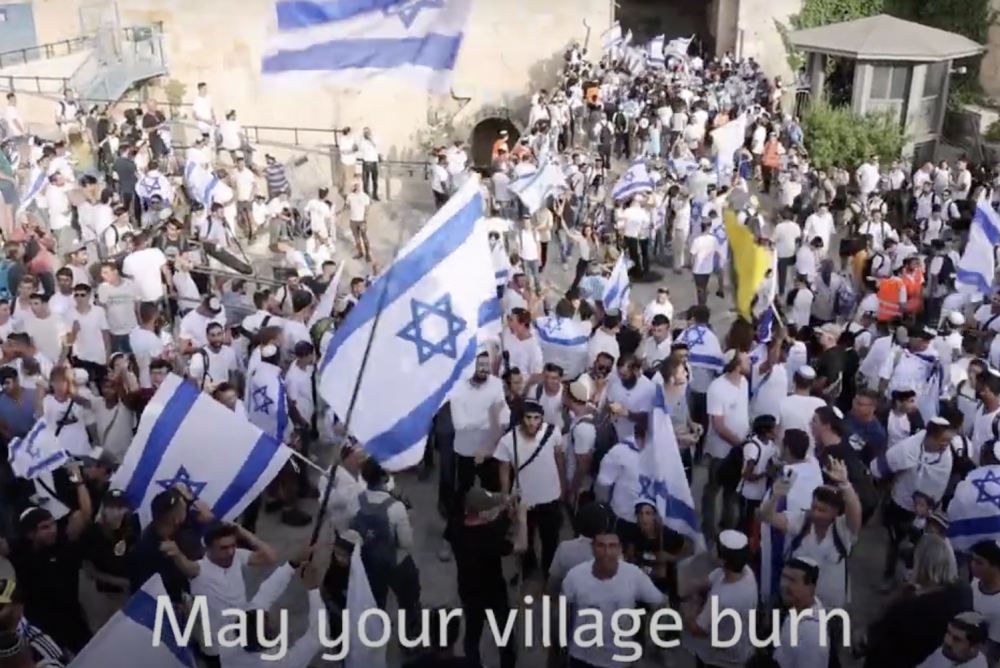 Israeli Jewish extremists chant racist and violent slogans against Palestinians during the Flag March on Jerusalem Day, May 29, 2022. (Oren Ziv)

On Sunday, May 29, tens of thousands of far-right Israelis took to the streets of Jerusalem for the annual Flag March marking “Jerusalem Day,” which celebrates Israel’s “reunification” of the city in 1967 when it conquered East Jerusalem from Jordan. For Palestinian residents of Jerusalem, this day is often one of the most violent of the year, with Jewish Israeli extremists marching through Damascus Gate into the Old City while verbally and physically assaulting Palestinians on the streets. This year’s march was no different.

Whereas from the point of view of the Israeli public, the Flag March passed relatively quietly — no rockets were fired from Gaza, as Hamas had threatened, and neither war nor violence broke out across the country, as took place in 2021 — for the Palestinian residents of the city, this year’s march was even worse than previous years.

From around noon, police began removing Palestinian non-residents from the Old City, and prevented people from entering through several of the city’s gate. Later on, the authorities shut down Damascus Gate entirely to Palestinians and tourists. Israeli youth who passed through the Old City before the official march assaulted and pepper sprayed Palestinians in the street.

At one point a riot broke out, during which a settler pulled out a weapon. Police did not detain him. 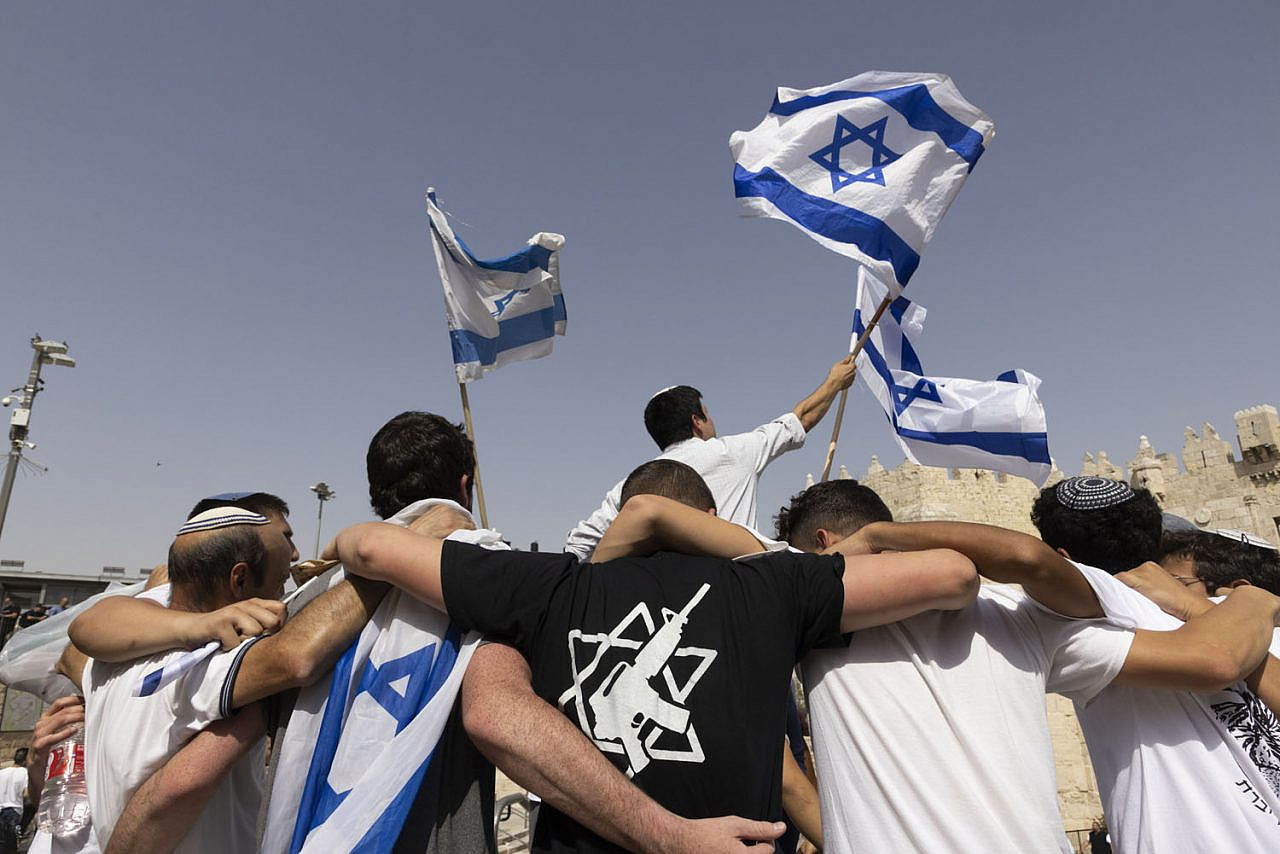 Although the police claimed that Palestinian flags would only be confiscated if they interfered with the march, in practice police arrested several Palestinian men waving flags at Damascus Gate, and later confiscated flags from others. Some Palestinians found a creative way of hoisting their flag during the parade — with the help of a drone which flew the flag over the walls of the Old City. When the drone landed shortly after, it was confiscated by police.

This year, racist slogans seem to have been the main chants at the march, including “death to Arabs,” “Muhammad is dead,” and “may your village burn.” These were heard from almost every group that passed through Damascus Gate, and not just at the fringes. Young Jewish extremists also celebrated the death of Palestinian journalist Shireen Abu Akleh, and wished death upon Ahmad Tibi, a Palestinian member of Knesset.

The organizers of the march made no attempt to prevent the chants. The police, which routinely and forcibly disperses Palestinian protests in Jerusalem over political chanting deemed to be “incitement,” also did not intervene. Only when a group of marchers tried to storm the press compound did the police stop them — but without making any arrests, even of those who threw objects at the journalists in full view of the police. 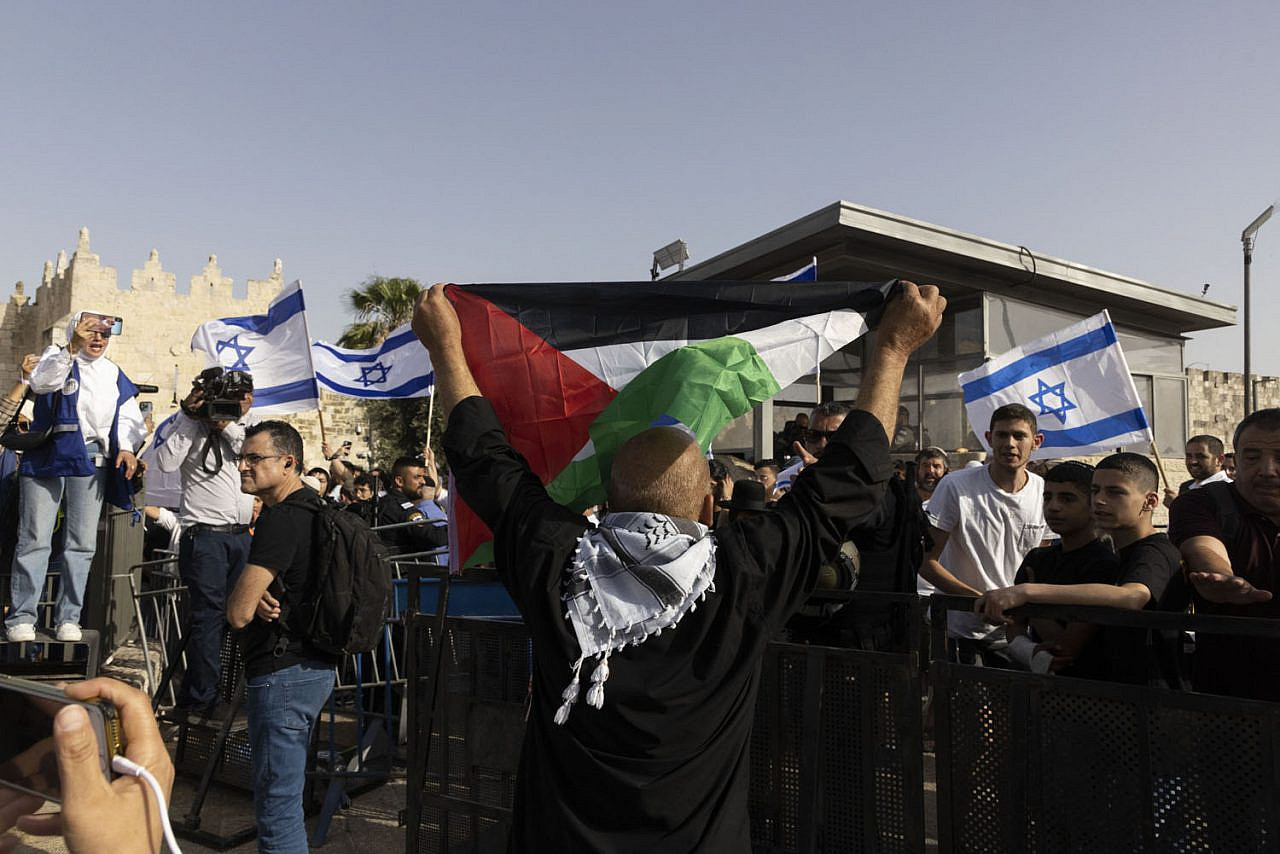 A Palestinian demonstrator holds up a Palestinian flag in front of the Flag March procession, moments before police arrested him, May 29, 2022. (Oren Ziv)

Some of the Palestinian protesters continued onto Sheikh Jarrah after Israeli settlers smashed the windows of over a dozen cars in the neighborhood and fled without being arrested; settlers were also filmed throwing stones toward Palestinians in full view of the police, who didn’t arrest them. Jewish extremists then attacked, pepper sprayed, and stole a cellphone belonging to a Palestinian journalist.  By the end of the day, however, more than 40 Palestinians had been detained and arrested. Late on Sunday night, Jewish extremist youth tried to march once again to the neighborhood but were stopped by police. 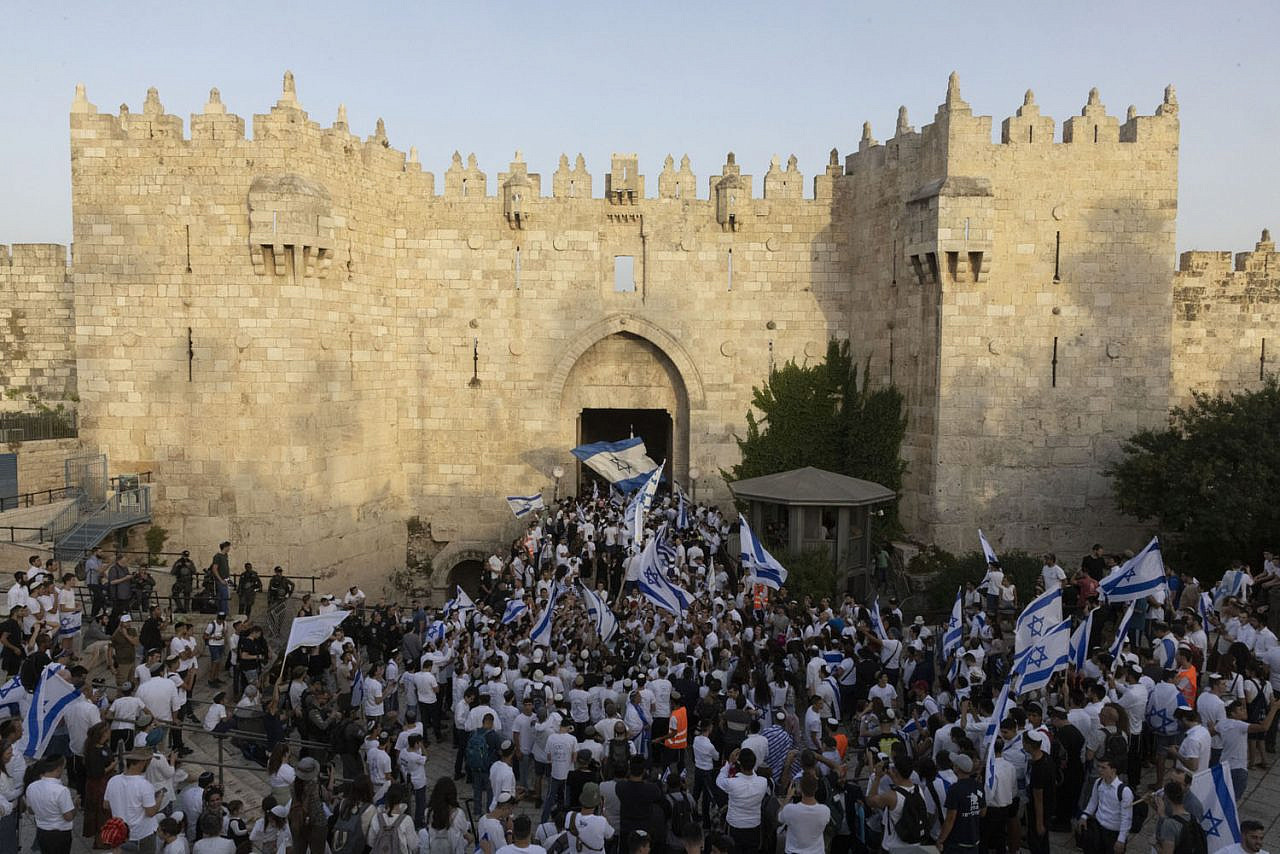 Furthermore, while the government and the police have insisted over the last few weeks that there has been no change of the “status quo” at Al-Aqsa, Sunday’s events presented a very different picture. For months, Jews have been ascending to the Temple Mount/Haram al-Sharif to pray with little problem; on Sunday, many of them waved Israeli flags and laid prostrate on the ground in prayer as the police looked on.

The Israeli leadership says claims of a Jewish takeover of Al-Aqsa amount to “incitement” and “fake news,” but anyone who saw the images of over 1,000 Jews entering the compound knows that a significant shift is taking place beneath our feet and before our eyes.