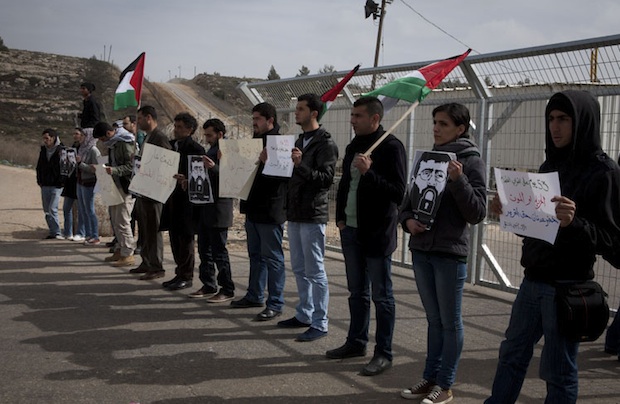 Doctors have expressed grave concern for the life of Khader Adnan, who has been on a hunger strike for the 58 days since his arrest. He also recently stopped drinking water.

Adnan, 33, is hospitalized at the Ziv Medical Center in Safed, where he is chained to a bed despite his condition. On Friday, in light of the complications entailed in moving him, a military court hearing was held at the hospital, regarding Adnan’s appeal against his administrative detention order. Despite the urgency of the case, the military judge announced he would give his decision “over the course of next week” (meaning, this present week). Adnan’s wife, who was allowed to see him yesterday, said that he looks like a ghost.

Adnan, who is politically associated with the Islamic Jihad, began his hunger strike initially in protest of the mistreatment he said he endured during his Shin Bet interrogation. It continues against the four-month administrative detention order issued against him.

Administrative detention is an unusual and extraordinary legal phenomenon, whereby the security establishment essentially admits that it does not have evidence on which to base any charges, but chooses to imprison someone out of concern over activities he or she could potentially undertake in the future. Administrative detention orders can be repeatedly extended for six months, and there are many who spend years in prison under such conditions – with no charges against which to defend themselves. In addition to Adnan, there are presently some 310 people in administrative detention in Israel.

The protest spreads, while the media remains silent

In recent days, the protest against Adnan’s detention has expanded. Demonstrations calling for his release have taken place in Gaza, Ramallah, outside the Ofer Prison, in Nablus, Hebron, Haifa and Tel Aviv. A few of the weekly anti-occupation protests in the West Bank have been dedicated to this call. This Friday, the demonstration marking seven years since the start of Bil’in’s struggle will be partially dedicated to Adnan, who has taken part in the village’s demonstrations in the past.

In Gaza, nine activists have launched a hunger strike in solidarity with Adnan in front of the offices of the International Committee of the Red Cross, demanding immediate intervention on behalf of his release. Additional demonstrations for his release have been held in cities all over the world. Amnesty International and Human Rights Watch have also called on the Israeli government to release Adnan and save his life.

Al Jazeera has also reported that hundreds of Palestinian prisoners in Israeli jails joined the hunger strike yesterday. This strike is taking place just a few months after an earlier hunger strike that swept Israeli jails, in protest against the worsening of prisoner conditions as a result of a government policy designed to exert pressure and bring about the release of Gilad Schalit. That strike ended with the prisoner exchange deal, which the Palestinian prisoners had hoped would end the worsened conditions. To this day, that hasn’t happened.

Like then, Israeli mainstream media coverage of the hunger strike is currently almost non-existent. The lack of coverage is no doubt a result of the absence of public discourse on the Palestinian prisoners in general, and on Israel’s use of administrative detentions specifically.